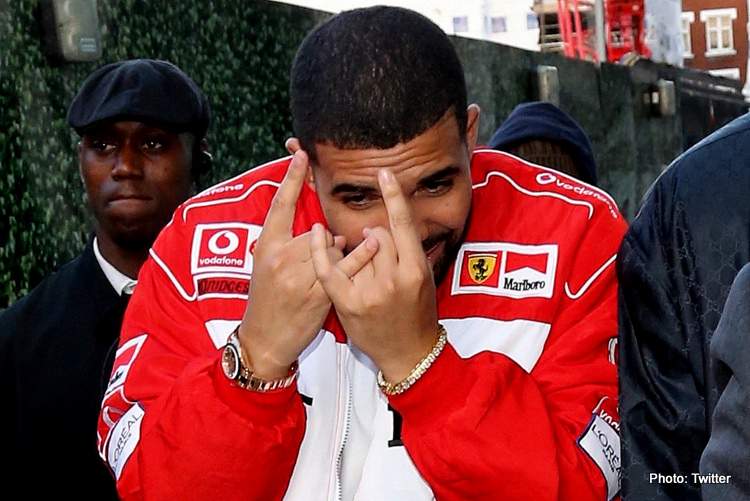 It proved to be a very, very expensive 2022 Spanish Grand Prix for superstars Drake, the rapper betting a whopping $230,000 on Ferrari driver Charles Leclerc winning the race on Sunday.

Drake shares his name with Ferrari founder Enzo who was known as Il Drake, connected or not the Canadian rapper proudly placed his first-ever F1 bet on the cryptocurrency platform Stake, stumping up $230,000 (he bet Canadian $300,000) for Leclerc to win on Sunday in Barcelona.

It nearly came true for Drake, Leclerc and Ferrari who started well from pole, got ahead of Max Verstappen, his tormentor in chief, and when the Red Bull driver spun, the Ferrari championship leader (at that point in time) was cantering to a famous victory in Spain, until fate intervened… or was it Drake’s curse?

Not so well. Very badly in fact. Leclerc reported a problem around lap 27-28 and was told to return to the pit box for Ferrari to retire the hitherto bullet-proof and effective F1-75. A PU issue was blamed for the failure of the Red car, while Verstappen sailed home and to the top of the drivers’ standings after round six.

It was a significant loss of the high ground in this year’s yoyo season of fortunes, from being the chased Ferrari are now back to doing the chasing, and all it took was two hours in the baking Barcelona sunshine for Red Bull and their reigning F1 World Champion Verstappen to take command of this fascinating battle for the first time this season.

It might be worth revisiting the fabled Drake curse

Sportsmail report that Drake is a partnership with crypto firm – Stake –  and hosts live streams for them; and recently won an estimated $2-million in Bitcoin betting on the 2022 Super Bowl.

But his Ferrari bet bombed badly, reviving the “Drake curse” which might be visiting F1 with the rapper it is named after.

Consider these for bad omens related to the popular rapper:

Which raises the question: Has Drake been hanging out with Lewis Hamilton before Barcelona?

The two are mates and until this weekend the Mercedes driver has not been at his very best. Food for thought for the superstitious type among us.

Our own betting project is meagre compared to the kind of money Drake was daring to fling on a sport that is as unpredictable as it is predictable. Drake found out the hard way!

But it’s probably chump change to the award-winning rapper who s reportedly worth $250-million.