Barcelona FP1: Leclerc off to a flying start 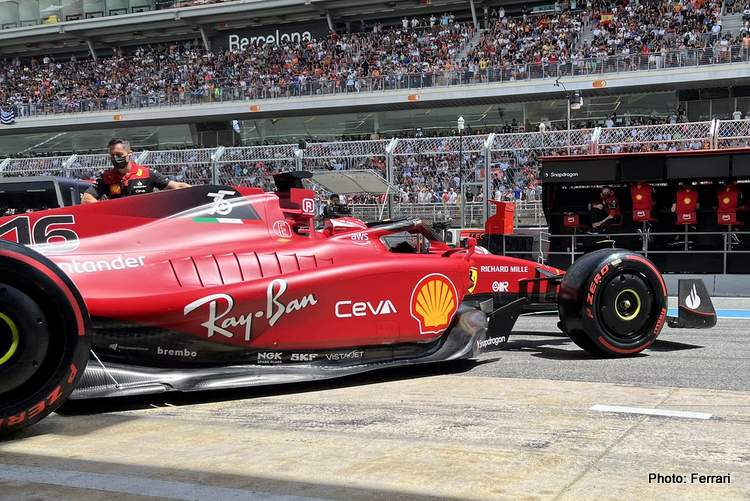 Charles Leclerc lead teammate Carlos Sainz as the Ferrari pair went fastest at the end of FP1 for the 2022 Spanish Grand Prix in Barcelona on Friday.

The Ferrari drivers made good use of their updated F1-75’s and were followed by Max Verstappen in the Red Bull, the reigning World Champion third fastest.

The Formula 1 circus was back to Europe for the 2022 Spanish Grand Prix, after its Stateside tour in Miami two weeks earlier.

The importance of racing in Barcelona stems from the fact that this venue is used in winter testing, and is the team’s race of choice when it comes to introducing major upgrades, as the layout of the Circuit de Barcelona-Catalunya represents the best test for an F1 car’s performance, with its combination of low, medium, and high-speed sections.

Many teams are under the spotlight in Barcelona, starting with Ferrari who will be bringing upgrades to their F1-75 for the first time, after keeping the faith in their original concept for the opening five races of the season, so it would be interesting to see if the Reds can restore their superiority after it seemed that Red Bull began gaining the edge in the last two races.

The troubled Mercedes also have an updated W13 in Barcelona, and word is, they will be validating their radical “zero-pod” concept this weekend, to decide their future development path, as the eight-time Constructors’ Champions look to emerge from their slump.

Mercedes, just for the sake of reminding, have already started validating their upgrades after using their second and final filming day allowed under the regulations.

Worth noting is that Mercedes showed up with a conventional-designed W13 in Barcelona for pre-season testing, and ended the test fastest of all. Will they revert to that debut spec?

Aston Martin as well – suffering badly from “porpoising” – have turned heads when they arrived Barcelona with their B-Spec AMR22, as the car featured a radical redesign, with sidepods very close to, if not identical to the dominant Red Bull RB18. Are they back to their old copying habit? And will the updated car be of any use?

Lots of unhappy rival teams here in the paddock about the similarity between the Aston and the Red Bull…. https://t.co/cH7jeue18n

Those are the major anticipated updates, but for sure many other teams will be bringing revised cars to Barcelona, Haas not one of them though, so it would be interesting to see how the pecking order changes this weekend.

Other than car updates making debuts in Barcelona, new Race Director Eduardo Freitas makes his first appearance in his new role, after the first five races were under the direction of his colleague Niels Wittich.

There were some changes in the drivers lineups as Nyck de Vries was given the seat of Alex Albon at Williams, while Red Bull junior Juri Vips took the place of Sergio Perez at Red Bull.

Robert Kubica was on driving duty as well at Alfa Romeo, taking the place of the team’s Chinese rookies Zhou Guanyu for the first practice session in Barcelona.

The BBC reported that Red Bull have requested the FIA to launch an inquiry to check whether Aston Martin have copied their car.

Aston Martin said the FIA had confirmed it was “legitimate independent work”, according to the BBC.

In addition to Ferrari, Mercedes, and Aston Martin, Alfa Romeo has a raft of changes on their car, a new floor being the main one.

Notably, the Mercedes due, Lewis Hamilton and George Russell whose cars were fitted with new floor are not bouncing as much. Another false dawn like Miami?

On the tyres front, Pirelli brought the C1 (Hard), C2 (Medium) and C3 (Soft) compounds to this race.

These are the compounds in use this weekend for the #SpanishGP 🇪🇸

Fernando Alonso and Lewis Hamilton had a moment a Turn 12 during FP1 where the Briton was caught out by the Spaniard, which was referred to the Stewards who announced it will be investigated after the session.

Leclerc’s time of 1:19.828 was good enough for top spot, but there was nothing to choose between him and Sainz, who was on 0.079s behind in second.

Max Verstappen who took third for Red Bull was 0.336s off the benchmark time in his RB18, as it seems that Ferrari’s upgrades are working properly.

George Russell was a strong fourth for Mercedes, as the W13 seemed to have calmed down with the new floor fitted to it. The Briton was 0.762s off the top time.

Fernando Alonso followed in fifth, his Alpine fitted with a new rear wing, and was 0.178s further down on Russell.

Lewis Hamilton was sixth in the sister Mercedes 0.983s off the pace, followed by Lando Norris in the McLaren and 0.486s further down the road in seventh.

Pierre Gasly was eighth in the AlphaTauri with a lap time of 1:21.422 being the best he could muster, as Daniel Ricciardo took ninth, 0.315s slower than the Frenchman.

Yuki Tsunoda made rounded off the top ten but almost two seconds slower than the top time.

Both Aston Martin drivers in their “Green Bulls” were out of the top ten, Lance Stroll in 12th and Sebastian Vettel in 16th. 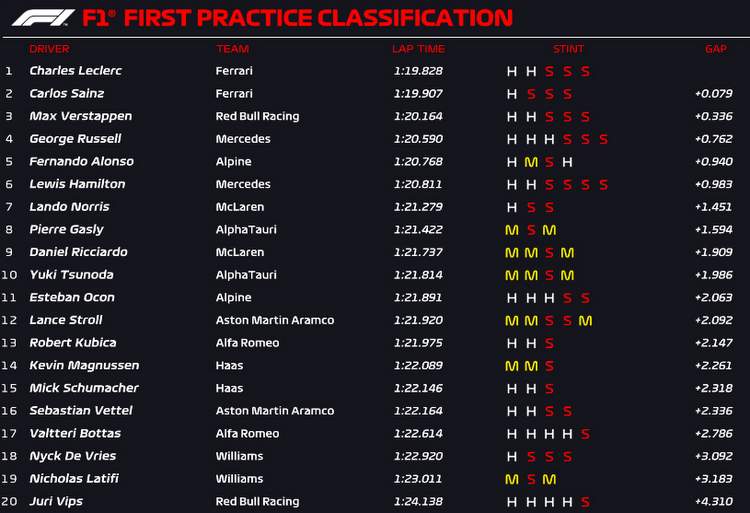