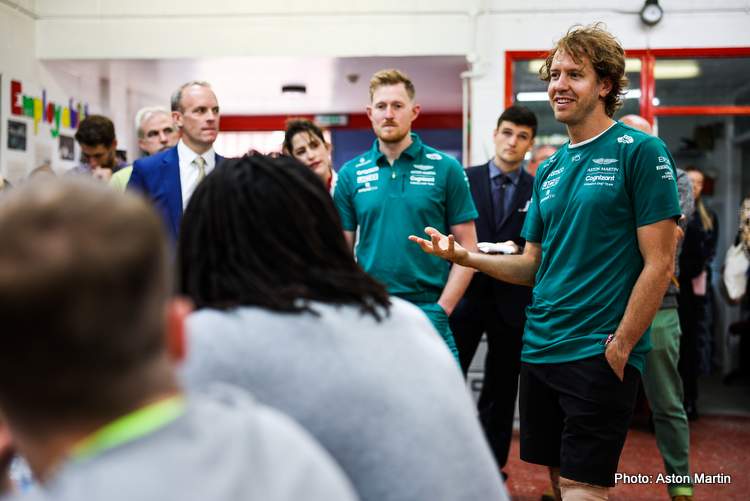 Sebastian Vettel has visited the Feltham Young Offenders Institution in London, and spoke to disadvantaged youngsters, inspiring them about their future.

The four-time Formula 1 World Champion has kept busy with off-track activities in the space between the Miami Grand Prix and the upcoming Spanish one.

In addition to featuring on BBC Question Time, where he touched in on various topics including environmental topics, the German has visited Feltham Young Offenders Institution, and spoke to the disadvantaged youngsters, where he took part in opening a new mechanics shop.

“Giving young people, especially those who are in a difficult situation, a second chance is very important,” Vettel said during the visit.

“Not everybody has the same chances from the outset in life – and for those who don’t, it’s important that we give them those chances to help them wherever we can.

You don’t know what drove people to make mistakes

“It’s easy to have preconceptions about what people in somewhere like a prison are like – about what they’ve done and the crimes they’ve committed – and we forget that they’re still people,” he added. “They have their own story, and you don’t know what drove them to a point where they made a mistake in their lives.

“It was great to hear some of their stories today and to see how Feltham Young Offenders Institution is providing a space like the new workshop where they can discover sides to them that they maybe didn’t know before.

“They will be able to work on cars and experience things that they may want to continue when they are reintegrated into society,” he believed.

Your future is what you make it.💚

Last week, Seb and his No.1 Mechanic, Mikey Brown, opened a new mechanics’ workshop at @hmyoifeltham, heralding the launch of a programme for young offenders to learn the trade as part of their rehabilitation.

Tap below to discover more.

Back to F1 and racing, Vettel previewed the 2022 Spanish Grand Prix in Barcelona. The Circuit de Barcelona-Catalunya is known to properly test the abilities of an F1 car, with it various low, medium, and high-speed corners, which is the reason why it has been the testing venue for the sport for quite some time.

But the track remains a tough one in terms of overtaking as its layout doesn’t allow for that, something the Aston Martin’s driver shed light on in his team’s preview of the upcoming Spanish Grand Prix.

He said: “Barcelona will showcase a lot of the behaviour inherent in these 2022 cars; the lower-speed corners will be a physical challenge, while the faster sections will be about bravery and trusting in the ground-effect.

“Passing has usually been tricky here but I think these cars have shown they’re much better at going wheel-to-wheel, so I think it will be a different race to previous Spanish Grands Prix,” Vettel concluded.

Vettel’s teammate Lance Stroll added: “I think Barcelona’s going to be a great circuit to showcase how these ground-effect cars work in the high-speed sections – especially at the long Turn Three bend – so I think the fans can expect some exciting onboards.

“This weekend also provides a chance to compare everyone’s progress after testing here earlier this year. These cars are like prototypes and are improving all the time,” he revealed.

Aston Martin are reportedly bringing a B-Spec version of their AMR22 to Barcelona, after suffering miserably with their launch version of the car up to now, as they sit ninth in the 2022 Constructors’ Standing with 6 points.