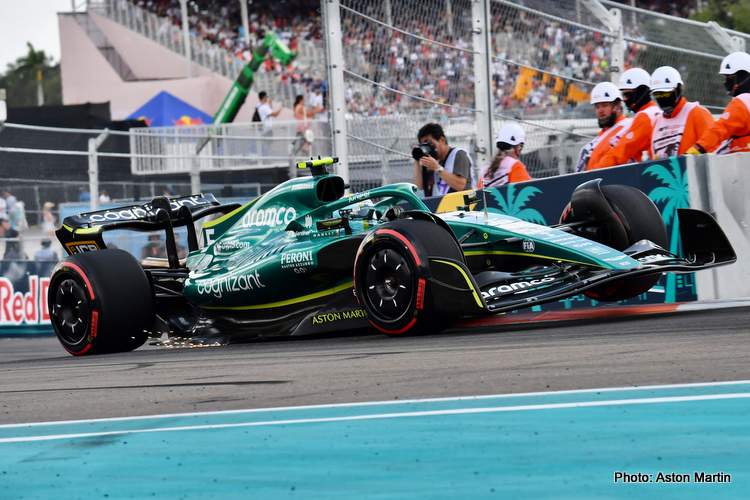 Aston Martin are seeking to get their disastrous 2022 Formula 1 campaign back on track, with reports claiming the team will be bringing a totally new car to Barcelona, a B-spec AMR22.

Aston Martin are in deep trouble this season, with their AMR22 probably being the only car with worse “porpoising” than the Mercedes W13.

They had a disastrous weekend in Melbourne with their drivers Sebastian Vettel and Lance Stroll crashing all over the place, and while they were “less bad” at Imola, and somehow the nature of the track at Miami helped them with the bouncing – even Mercedes had less “porpoising” – and had it not been for Vettel being wiped out by Mick Schumacher, both cars would have scored points.

However, a report by Auto Motor und Sport claims that Aston Martin will be bringing a heavily updated AMR22 to the next race at Barcelona, almost a B-spec car.

The report mentions that due to the “porpoising” problems of the AMR22, the team are not able to run it “with the ground clearance it was built for” and also mentions that the Aston Martin drivers were struggling with lack of  feedback from the steering ahead of Imola.

“Engineers modified the steering to give drivers better feedback,” the report said. “They didn’t drive by feel, but by memory.

“The feedback from the car via the steering was disturbed, which was due to the fact that the aerodynamicists had prevailed over the chassis engineers in the design of the front axle,” it added.

“The intervention in the steering gave Vettel and Stroll back their confidence. In addition, the engineers have meanwhile increased the load limits of some important components in the car.

“The fear of material breakage was another reason why bouncing had to be avoided at all costs. In Miami, Aston Martin didn’t just find the flat track convenient. The drivers and the car could again accept a certain amount of rocking.

“This allowed the vehicle height at the rear to be reduced somewhat, which was immediately reflected in the lap times,” AMuS explained.

Only one updated Aston Martin may be ready for Barcelona

But is seems that Aston Martin is already having “a completely renewed AMR22 is already in the works” based on the team’s technical director Adrew Green’s conviction that “there is more to the car than just midfield positions”, according to the German publication

“At first glance, it will differ significantly from its predecessor and should then also be immune to bouncing,” the report said of the anticipated AMR22.

“The aim of the premiere is the Spanish GP, but delivery problems could delay the debut by a week. Or only one of the two B versions is ready in Barcelona,” AMuS concluded.

Aston Martin are currently ninth in the Constructors’ Standings with six points, three more than Williams in tenth.