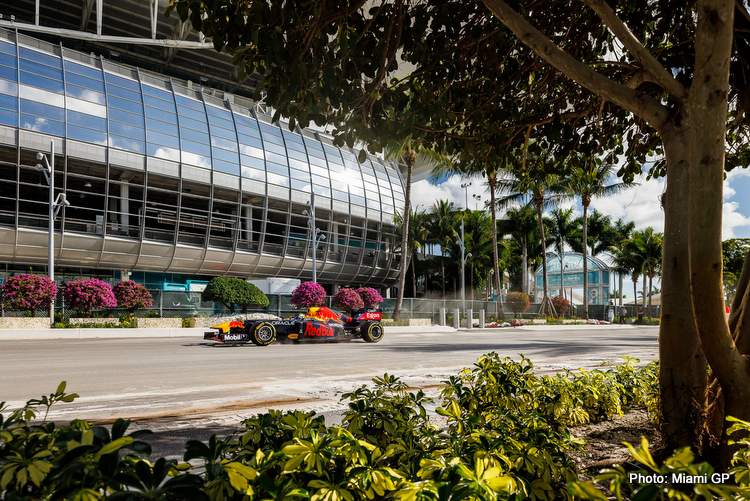 The 2022 Miami Grand Prix represents another great unknown for the Formula 1 teams as they resume their struggle to understand the tyres together with ground effect aero away from the wind tunnel and/or computer simulation.

It’s at this point I should “fess up”. I’ve known Clive since he penned his first circuit – Dubai Autodrome some 25 years ago. A track that I have intimate knowledge of and one I would rate as one of the top 5 drivers’ circuits in the world.

Clive has gone on to design a variety of both kart and car racing venues. However, for me, he peaked the first time out with Dubai. I would humbly suggest to him that if he wanted to improve on perfection, he takes a facsimile of it and makes the required changes to race in the opposite direction. Now back to Miami.

A street circuit with some real “driver” challenges

The Miami Hard Rock course was never going to be a blank canvas like Dubai. But every artist has their own inimitable style, and I can see Clive has brought his “Bowensque” technique here to the fore.

A modern street circuit is normally a mix of “point and shoot” 90-degree corners, long straights, and benign kinks that might as well be straights. Whilst some of this cannot be avoided, Apex has brought what appears to be some very tricky bends and sequences. Something that is normally absent from this type of venue.

The challenge of decreasing radius curves

Corners that “tighten up” as opposed to “open up” are always tricky for drivers, leaving them with the feeling that they either “went in” too quick, or too slow. Their challenge is exacerbated if the approach is blind, as they now need to “know” where the apex is, rather than just being able to look for it.

Nearly all the corners at Dubai Autodrome fall into this category, so it’s no surprise Miami has four of them: Turns 8, 11, 12, and 14. The engineers can expect plenty of complaints about mid-corner understeer for the above-mentioned corners.

The first (Turn 8) is super important as it leads onto a series of flat-out benign kinks prior to the second DRS Zone (the first DRS Zone is situated on the main straight).

Turn 8 has another additional challenge over and above its shape courtesy of  Turns 4, 5, 6, and 7. A sequence of high speed “almost” flat out left, right, lefts. To have the car “porpoising” just prior to such an important corner is not an option. With a wall in close proximity to the exit, a mistake could be expensive.

But by far the most challenging section is the sequence of Turns from 11 through to 16.

Overtaking here is unlikely, but drivers will need to try and carry momentum through this very technical slower section.  This makes following the driver ahead of you closely somewhat inadvisable during the race and or qualifying.

A priority will be to get a  good exit out of 16 as it could set you up for an overtake into Turn 17.  However, like Turn 8, the run-off at the exit is negligible. No one will want to be at home to “Mr. Cock up” here.

So, there you have it: three DRS zones – if they stay. And what looks to be a very challenging track from the driver’s perspective.

Well done Mr. Bowen. Red Bull and Ferrari will be strong as usual and hopefully, Mercedes with their new parts will be able to compete with them.

For the spectators, there should be no shortage of entertainment both on and off the track. Yeehah.