Russell: Mercedes’ situation in Melbourne to be very similar 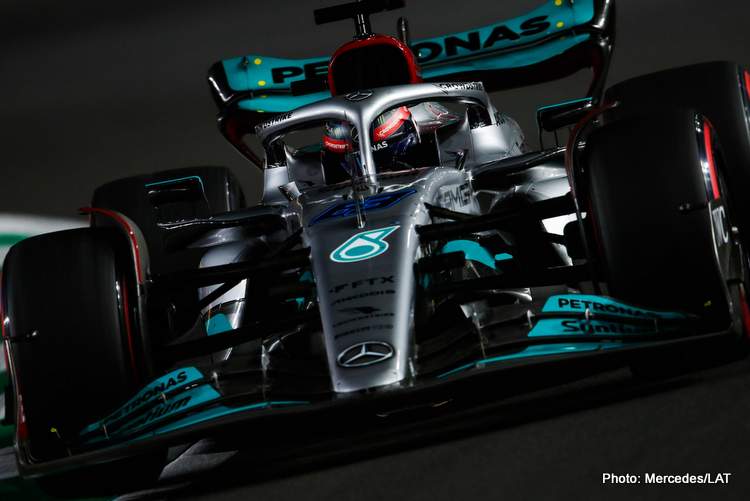 George Russell believes Mercedes will continue to suffer at the 2022 Formula 1 Australian Grand Prix, after being painfully slow at the two opening races of the season.

Russell finished the races in Bahrain and Saudi Arabia fourth and fifth respectively, compared to third and tenth for Lewis Hamilton, who had to go through the pains of being knocked out of Q1 in Jeddah, as he and his team went down a wrong setup path with the troublesome W13.

With a two-week break between Saudi Arabia and Australia, one would expect that Mercedes would have come with some solutions, but Russell has downplayed the team’s chances Down Under.

“I think will be very similar, to be honest; I don’t see any reason why we will make any strides forward,” he told media about Mercedes’ chances at Albert Park. “We’re definitely the third-fastest team at the moment, [and we’re] closer to the fourth than we are to the second.

“It’s going to be more of the same [level of performance] in the coming races,” Russell admitted.

The Briton who joined the team at the beginning of this season went on to explain the difficult situation they are currently enduring, which puts them in damage limitation mode, but he hoped that as the season progresses, the team can find their way back to the front.

“We need to be in almost damage limitation mode at the moment, pick up the pieces, when there’s an opportunity, don’t throw away unnecessary points, even though it may just be for fifth or sixth or hopefully, a bit higher, and make sure we were within touching distance always,” Russell explained.

“Then, hopefully, when the car does improve, we can come back fighting,” he added. “It’s a very long season, I think we’ve all got confidence that if we do things right, there’s no reason why we can’t close the gap and potentially overtake [the top two teams].

Russell may be optimistic and confident in his team’s ability to turn things around, but he is in now way naïve, as he knows for a fact that their rivals, Red Bull and Ferrari, will also be developing their already great cars.

“But we equally appreciate and recognise that Ferrari and Red Bull will continuously improve as well,” he acknowledged. “So, we could close up by six-tenths [but] there’s no reason why they can’t extend by another six-tenths as well.”

Shifting back towards optimism, the 24-year-old said: “I think in Formula 1, things change incredibly quickly. We are very fortunate that the calendar is not, as I said before, it’s not very dense at the start of this season.

“Even if it’s a couple of months, we are only six or seven races down and out of a 23 race season,” he pointed out.

“Even if you come out the blocks incredibly fast after the summer break, even as Mercedes and Lewis did last year, you’re still in with a shot,” Russell maintained.

This definitely isn’t the start of a Mercedes career Russell was hoping to have, and he cannot be blamed for that as he has made the best out of the woeful W13, with which the eight-time Constructors’ Champions have clearly dropped the ball.

However, the young driver is definitely going through a character-building experience as he goes through the pains with his World Championship team in order to recover from the slump they are in now.