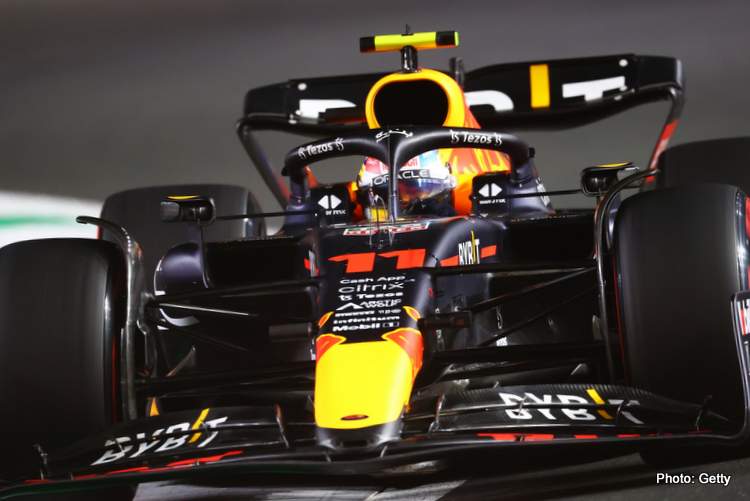 Sergio Perez stole pole for the 2022 Saudi Arabian Grand Prix, the first of his career, in a drama packed session where he trumped both Ferrari drivers.

Perez defied all the odds that were tipping a “Charles Leclerc or Max Verstappen” pole in Saudi Arabia and literally stole pole position from the Ferrari duo in the dying moments of a dramatic qualifying around Jeddah Corniche Circuit.

It was the slightest of margins between the Mexican and the Monegasque, who took second just 0.025s slower than the #11 RB18.

Perez said after qualifying: “It took me a couple of races! But what a lap man, it was unbelievable!”

A clearly surprised Leclerc added: “I am very happy with the lap – I more or less put it together. Congratulations to Checo. He did an incredible job today”

Third place went to Carlos Sainz, who at one point was looking good for pole himself, but failed to improve on his second flying lap, and ended up 0.202s off the pace of Perez.

Sainz said of qualifying: “It’s going to be exciting. All four cars mixed up between the Ferraris and the Red Bulls.”

Fourth place went to Max Verstappen, as the reigning World Champion could not muster better than a 1:28.461 which was 0.261s off his teammate’s pole time.

The session was filled with drama throughout, as seven-time World Champion fell prey in Q1, with a shock exit leaving him 16th best in the ever troublesome W13.

Hamilton said after his shock exit: “Just struggled with the balance of the car, it’s not where we want to be. We’re professional, we lock out whatever it needs.

“Just unfortunately we went the wrong way with the set up,” the Briton lamented.

Then things took an ugly turn with Haas’ Mick Schumacher crashing heavily in Q2, but thankfully walking away from his wrecked Haas unscathed.

Going back to Q3, Esteban Ocon was a superb fifth in the Alpine, the Frenchman 0.868s off the pace, as George Russell put in a great effort, outqualifying his decorated teammate in his second race with Mercedes, taking sixth 0.036s adrift from Ocon.

Fernando Alonso put the second Alpine in Q3 as well but in seventh, the Spaniard 0.947s off the top time, and was chased into eighth by Alfa Romeo’s Valtteri Bottas, the Finn a further 0.036s behind Alonso.

Pierre Gasly took ninth for AlphaTauri with a lap time of 1:29.254, with the remaining Haas of Kevin Magnussen rounding off the top ten, 0.334s slower than the Frenchman. A respectable job by the Dane in his first time driving around Jeddah Corniche Circuit.

The drama continued in Q2 of qualifying for the Saudi Arabian Grand Prix, as with less than five minutes remaining from the second knock out period, Schumacher crashed heavily at Turn 12, destroying his VF22, but thankfully walking away from the accident.

Mick Schumacher has been assessed at the Medical Centre. The assessment revealed no injuries.

He has been transferred to King Fahad Armed Forces Hospital, Jeddah, for precautionary checks.#SaudiArabianGP #F1 pic.twitter.com/ZVJoHdl0M3

Schumacher crash caused so much damage to the car that it broke into two pieces when it was lifted to the break-down truck.

The McLaren pair, Lando Norris and Daniel Ricciardo were 11th and 12th respectively, a 0.122s separating the teammates.

Alfa Romeo’s Zhou Guanyu took 13th in the Alfa Romeo, as Schumacher’s time registered before he crashed was good enough for 14th.

Lance Stroll made it to Q2 but could not advance more than 15th on the grid.

That was a shocker as Lewis Hamilton was knocked out of Q1, the Briton failing to improve on his lap of 1:30.343 to make it out of the first elimination stage of qualifying.

Q1 started with Nicholas Latifi off for an early shower as he crashed out at Turn 13, only minutes into the session, and bringing up the Red Flag, before even posting a time.

Nicholas Latifi slides into the barrier at Turn 13

With the session green lighted again, the drivers head to the track, but within seconds, AlphaTauri called Yuki Tsunoda back to the pits to check the car for a fuel problem on his AT03, game over for the Japanese. 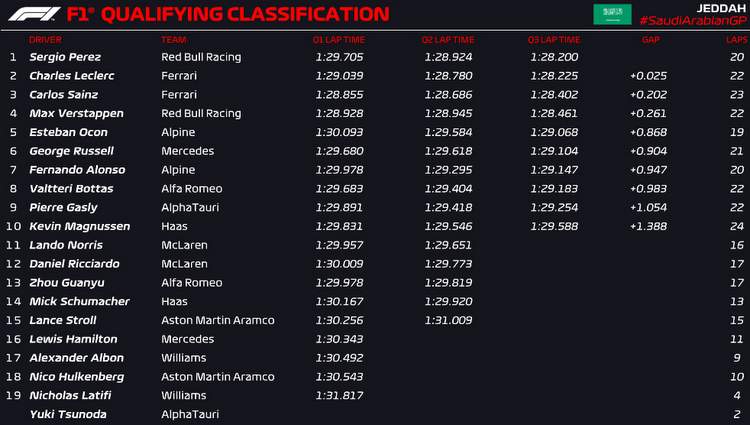