Saudi Arabia FP1: Leclerc off to a good start 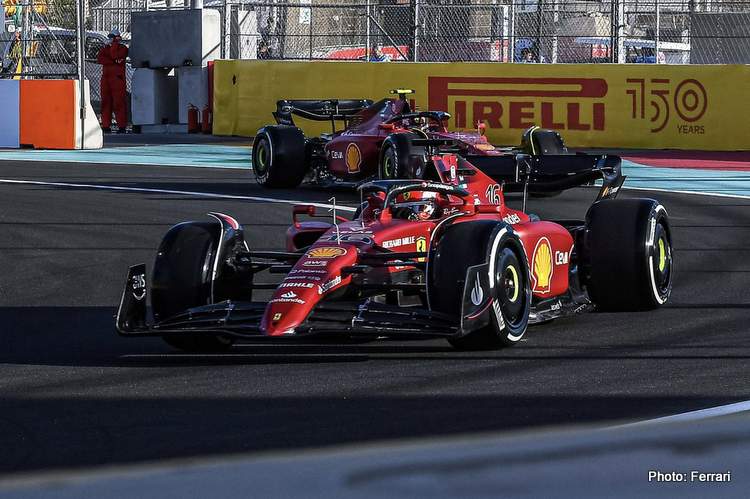 Formula 1 resumed in Jeddah with FP1 for the 2022 Saudi Arabian Grand Prix – Charles Leclerc leading the way, less than a week since the Ferrari 0ne-two season-opening race in Bahrain.

Charles Leclerc went fastest at the opening Free Practice session for the 2022 Saudi Arabian Grand Prix clocking a lap time of 1:30.772 set on the Soft tyres.

With not enough time for us to absorb what went down at the 2022 Bahrain Grand Prix, Ferrari taking a one-two, Red Bull imploding, Mercedes lucky to pick up a podium after after their 2021 rivals’ misfortunes, and not to mention McLaren’s dismal weekend and Aston Martin’s embarrassing showing.

Kevin Magnussen taking fifth for Haas was a feel-good story as Zhou Guanyu’s point-scoring F1 debut, along with some nice racing and cool new cars made for a promising start for the 2022 season.

With Saudi Arabia and Bahrain being back-to-back, it is fair to say that the teams won’t be bringing major upgrades, but the Red Bull’s reliability will be under the spotlight, as well as Mercedes’ management of the tough situation they find themselves in and whether they can control the damage this weekend as well.

Sebastian Vettel remains unfit to drive, as the German did not yet return a negative Covid test, and Nico Hulkenberg will be deputizing for him for the second race in a row.

Red Bull gave an explanation to what caused their reliability problems in Bahrain, and announced that both their cars suffered from lack of fuel pressure due to a vacuum preventing the pumps from drawing fuel, and that they have rectified the problem. Let’s see…

Red Bull statement on double retirement in Bahrain: “Both cars suffered lack of fuel pressure. Correct amount of fuel in both cars, but a vacuum prevented the pumps from drawing fuel. We’ve taken the necessary steps to correct this issue and we expect no problems this weekend.”

The Jeddah Corniche Circuit was revised ahead of the 2022 Saudi Arabian Grand Prix to address visibility concerns around some high-speed blind corners, as well as the revision of some barriers to accommodate the racing lines some of the drivers were using.

Kevin Magnussen was briefly on the track when the team called him to pit the VF22 saying: “In slowly, do not shift. He was out of the car and the team started working on it. The Dane did not run any further and Haas confirmed the problem was a hydraulic leak.

Mick’s back on track – he’s on the ⚪️ hard tire compound.

Kevin’s had to jump out – the team are working on a hydraulic leak and a radiator change may be necessary. #HaasF1 #SaudiArabianGP #FP1 pic.twitter.com/j2gK4seM6n

The session was Red Flagged after 18 minutes of running as McLaren’s Daniel Ricciardo reported that the 50m marker board at Turn 1 had come loose and it has since come off and fallen onto the track, as it turned out, it was Lando Norris who hit the marker board that was loose.

The session was green-lighted with 34 minutes remaining, and that was the first time the Ferrari made its appearance on the Jeddah Corniche Circuit.

Fernando Alonso will be entering the Saudi weekend with a new power unit bolted to his A522, as the team suspected an issue with an engine seal. No penalties for the Spaniard however.

🚨 Team Statement 🚨
After the #BahrainGP, we identified a suspected sealing issue with the Power Unit in Fernando’s car. As a precaution the ICE has been changed for the Saudi GP and the Bahrain unit sent back to Viry for further analysis. #SaudiArabianGP pic.twitter.com/WxDTAHggwA

Seven time World Champion Lewis Hamilton continued to report bouncing on his Mercedes W13 around the Jeddah circuit, the Brackley outfit apparently yet to sort out the problem despite having a new floor, and rear wing, the team running back to back tests with George Russell.

As mentioned, it was Charles Leclerc who was fastest around the Jeddah Corniche Circuit, followed by Max Verstappen 0.116s adrift.

Valtteri Bottas continued the strong showing of Alfa Romeo, and took third place with a lap time of 1:31.084, and was followed by Carlos Sainz in the other Ferrari, 0.055s further behind.

Pierre Gasly survived a brush with the wall midway through the session to take fifth fastest for AlphaTauri, 0.545s off the ultimate pace.

The Frenchman’s teammate Yuki Tsunoda was sixth fastest in the sister car a further 0.188s adrift, and was followed by Sergio Perez, seventh in the RB18 who’s best time was 1:31.563 almost eight tenths off the pace.

Esteban Ocon was eighth in the Alpine 1.254s off the pace, followed by Lewis Hamilton, the Briton woefully off the pace 1.592s too slow.

Fernando Alonso was the last of the top ten 0.017s slower than Hamilton.

McLaren’s troubles continued as Daniel Ricciardo finished 11th fastest as Lando Norris was only good for 13th, as one of the stars of the Bahrain Grand Prix a week ago, Kevin Magnussen failed to even set a time due to the hydraulic leak his VF22 suffered. 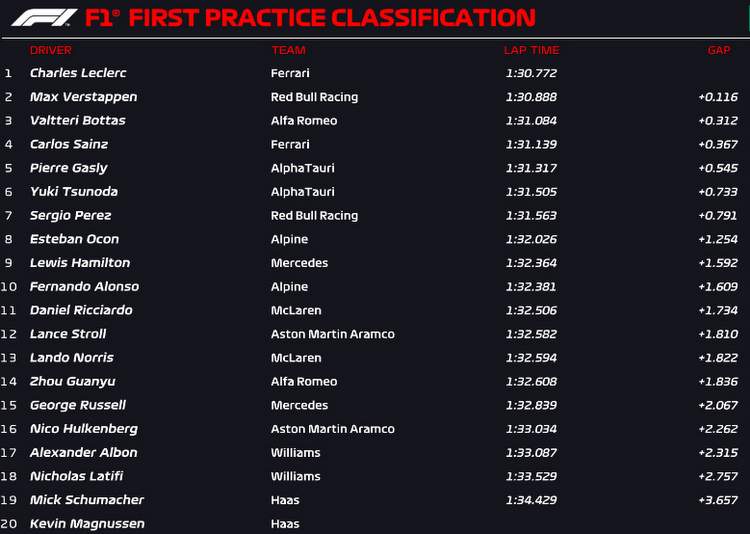