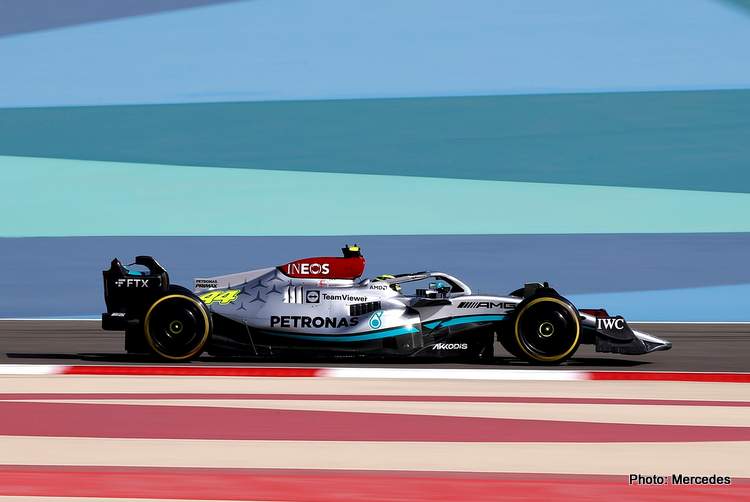 Christian Horner weighed in on Mercedes’ troubles during Friday practice for the 2022 Formula 1 Bahrain Grand Prix, saying the W13’s “porpoising” is quite aggressive.

Red Bull seem to be in formidable form, especially with Max Verstappen, as the Dutchman finished FP2 fastest of all and only 1.08s off the best time he also clocked in FP2 for the 2021 Bahrain Grand Prix.

His 2021 Title rival Lewis Hamilton however, was nowhere near the top, as the Briton’s radical “Zero-pods” W13 seems to be suffering the most from “porpoising” as the team is still struggling to find the proper balance between reducing the bouncing while note losing performance, something other teams like Red Bull and Ferrari in particular seem to have in check.

Christian Horner spoke to Sky Sports F1 about Red Bull’s “porpoising” compared to their rivals Mercedes and said: “I think to a lesser degree. Theirs looks particularly aggressive.

Red Bull had a fair amount of “porpoising” in Barcelona

“But the guys have done a good job. We had a fair amount of it in Barcelona but we have started to understand it and get on top of it,” he revealed.

“It has been a positive day for us really, both in the warmer conditions earlier and in the last session, the short-runs, the long-runs, both looked pretty decent.

“But, of course, fuel loads and engine modes, there are so many caveats but we are pretty satisfied with today’s running,” the Briton claimed.

Verstappen is still not buying the “Mercedes-in-trouble-narrative” suggesting he will only believe it when he sees it come qualifying on Saturday.

“We will have to wait and see tomorrow when everyone is turning their engines up really how much is in there,” he said.

In the mean time, an “annoyed” Mercedes boss Toto Wolff according to Auto Motor und Sport told the publication: “Max is in a league of his own.”

Qualifying for the 2022 Bahrain Grand Prix will finally put an end to all this debate, and finally all will be revealed as to who’s hot and who’s not as we embark on what promises to be another thriller of an F1 season.