Russell: Active suspension solves ‘Porpoising’ with a click of your fingers 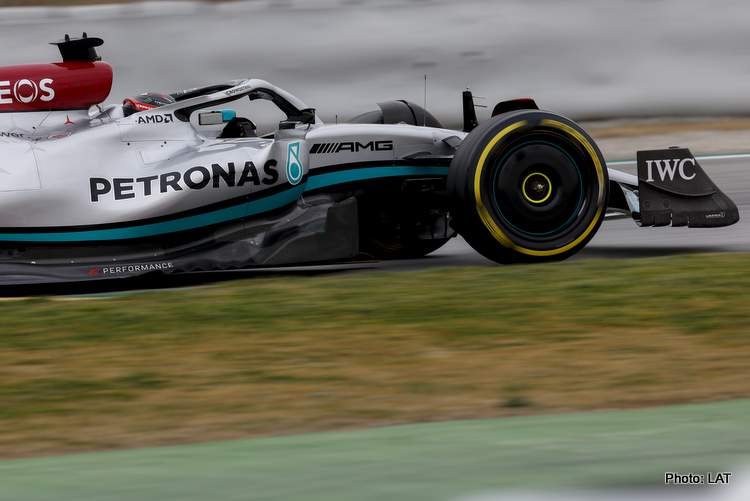 George Russell would love to see ‘active suspension’ back in Formula 1, which would solve the issue of ‘porpoising’, now the hot topic in the sport.

‘Porpoising’ remains the talking point of the 2022 F1 season, as the teams now prepare to the ‘official’ pre-season test in Bahrain on March 10, with the season opener – the 2022 Bahrain Grand Prix – to follow at the same venue on March 20.

As previously explained, ‘porpoising’ is a by-product of the ground effect, the main ingredient of the 2022 F1 cars’ downforce-generating recipe.

Across the F1 grid, every team was affected by the ‘bouncing’ phenomenon with a certain level of severity, McLaren less than others, Mercedes more so having to run a temporary floor solutions on their W13 to keep the flexing in check, as Alfa Romeo sustained floor damage in that regards.

George Russell spoke to the media about the issue, he said: “We just saw with the Charles video just how bad it was for them. So, I think we will need to find a solution.

“I guess if active suspension was there, it could be solved with a click of your fingers. And the cars would naturally be a hell of a lot faster if we had that.

“I’m sure all the teams are capable of that, so that could be one for the future. But let’s see in Bahrain. I’m sure the teams will come up with some smart ideas around this issue.

“I think it’s clear if we had active suspension, the cars will be a hell of a lot faster for the same aerodynamic surfaces, because you’d be able to optimise the ride heights for every corner speed and optimise it down the straight for the least amount of drag,” the young Mercedes driver explained.

“So, it’s an easy way to make the cars go faster. And if you think of a safety aspect, then potentially [it’s an improvement]. I’m sure there’s more limitations. I’m not an engineer.

“But we wouldn’t have this issue down the straight, that’s for sure,” the 24-year-old Briton concluded.

Active suspension is a system used to automatically control and alter the attitudinal control of an F1 car, to keep it at an optimal position at all times around a race track, and it was last used in 1993, as F1 banned it in an effort to clamp down on drivers’ aids.

Williams famously put the system to good use on their FW14B, which Nigel Mansell piloted to his only F1 Title in 1992.

George Russell might be excited about active suspension, but an engineer’s view of the system, namely McLaren’s technical director James Key, projects a different view.

“Active would help in two ways,” Key began his explanation. “You could aim to try and keep around your peak aero performance for more of the lap, which is a lovely place to be if you can do it.

“But also it could, in some way, possibly counter some of the natural frequencies hitting the chassis as well,” he retracted. “So, again, it wouldn’t eradicate the problem, the physics are still there, but it would certainly help manage it.

The currently applied cost cap is another obstacle facing the re-introduction of the active suspension in F1 according to Key who said: “As a technical director, I’d love to see the return of active suspension personally.

“But, with the cost cap, it’s not the best project to be doing,” the McLaren tech boss admitted.

Bumpy road to the top for Charles Leclerc! 🤕#F1 pic.twitter.com/Z6a5e6d3bo