McLaren least affected by porpoising, Ferrari on top of it 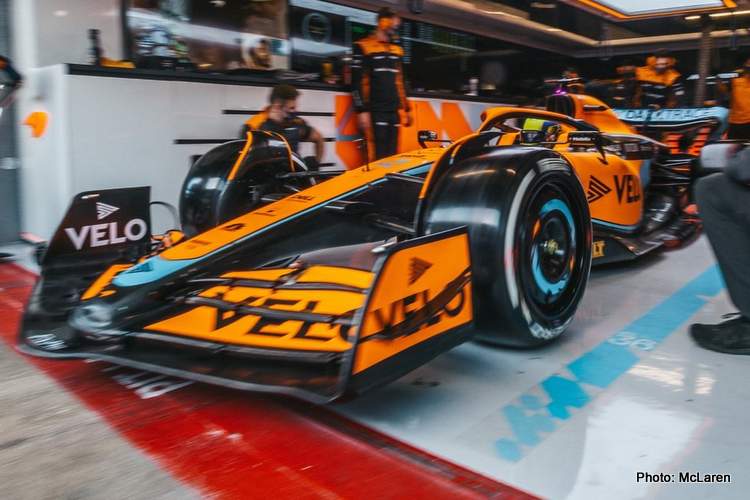 “Porpoising” is the word doing the rounds in the Formula 1 community after the conclusion of the first pre-season session at the Circuit de Barcelona-Catalunya.

“Porpoising” is the phenomenon when an F1 car starts bouncing on the straights at high speeds, an inherent feature of the ground effect concept around which the new 2022 F1 cars are built. We shall not go into the details of explaining this phenomenon now as out Technical expert Mark Kay, addressed it with quite some detail in his last version of Tech Draft.

In a video posted by F1 on twitter, the Ferrari F1-75 was seen “porpoising” on the straights to a great extent, and since then the topic has been a hot one within the sport.

Bumpy road to the top for Charles Leclerc! 🤕#F1 pic.twitter.com/Z6a5e6d3bo

“Porpoising” can be sorted, but at a price

The issue of “porpoising” can be sorted, but that will have an effect on pace, with Red Bull’s Chief Technical Officer Adrian Newey telling Auto Motor und Sport: “It’s not difficult to stop the bouncing. But it’s difficult not to do it losing lap time.”

Mercedes’ boss Toto Wolff, speaking to the same publication, added: “You can go up the rear with the ground clearance. But then you’re slow.”

A suggested solution would be to raise the car’s ride height and run a softer suspension setting, which was reflected in both Newey and Wolff’s comments.

Ferrari seem to have found a solution for the problem with team principal Mattia Binotto telling Motorsport.com: “On the bouncing, I think it was an issue but it’s not any more.

“If we’re looking at this on Thursday afternoon and earlier on Friday, I think we are bouncing a lot less. And somehow we are managing the situation,” he added.

It’s been reported that Ferrari may have sorted part of the problem, or reduced it, by raising the rear of the car and running with more suspension travel, which might affect the F1-75’s pace, but the lost pace can be compensated in the slow corners, suggesting that the teams might lose speed in some areas and recover it in others.

So there is a delicate balance to be found, something Haas team boss Guenther Steiner echoed, with Auto Motor und Sport, saying: “The art is finding the balance of how much you give away to fix the problem.”

McLaren have the “porpoising” under control

McLaren seem to be the least team affected by the “porpoising”, and only experienced it when testing certain aero elements on the MCL36.

“We had a couple of test items which appeared to promote it a bit more,” James Key, McLaren’s technical director, told Motorsport.com.

“But then removing them reduced it, so you can fix it aerodynamically as well,” he believed.

“I think where we are, it hasn’t really been a topic for us so far,” Key went on. “It’s not to say it couldn’t come back with further development, of course. We suffer from it a bit, but it’s not a major concern or a major distraction for the drivers.”

Key was modest, however, and admitted that not suffering from the bouncing problem was not because the team could foresee the problem, and fix it before hand, but he also suggested that a well tuned chassis would suffer less.

“I’d love to make out that we’ve been super clever but the reality is this is very difficult to simulate,” he admitted.

“It involves tyre stiffnesses, and the heave modes of your car. Because clearly, if it’s in tune with the chassis, that’s when you really see it go off when you get a natural frequency. There is front mass as well.

“So I don’t think it’s entirely luck. I think the stability of the car does play its role a little bit in this, and how well the car hangs on to load in various sort of ride height conditions to so on.

“But I’d be lying if I said it was by design. I think it’s a phenomenon we’re all going to get used to from track running with these cars. And hopefully we can iron it out as time goes on, and learn how to remove it as an issue.

“I think there’s probably always going to be a bit of inherent ground proximity reaction like that, because they are ground effect cars,” Key predicted. “I think its inherent, and that’s why we’re seeing it now. But I think we’ll learn to manage it.

F1 has been warned about the phenomenon

Adrian Newey claims that they have warned F1 about the bouncing phenomenon before and said to Auto Motor und Sport: “It already existed in the first ground effect era 40 years ago. It is inherent in this aerodynamic principle.”

But F1’s Pat Symonds – the man who worked along Ross Brawn in developing the new rules – disagrees, and said in return: “We offered the teams that the bottoms could be bent up by 25 millimeters on the outside edges.

“That would probably have alleviated the problem. But the teams didn’t want that because they were in their design process too far.”

Meanwhile, Binotto is pragmatic saying: “The pumping is worse than expected. The three-dimensional underbody is certainly one of the causes.

“We will all solve this problem somehow. Whoever can do it the fastest has an advantage at the beginning,” the Swiss-born Italian, whose team introduced an underbody upgrade, told Auto Motor and Sport.

“There’s still an awful lot to find in these cars and a huge amount to learn,” he told Motorsport.com. “So I don’t think the phenomenon can be eradicated, because it’s a physical thing.

“But in terms of managing it, I think it can be significantly less of an issue and a talking point after a little bit of development work,” Key concluded.

But until the “porpoising” is fully sorted out, the real speed of each team and the relative pecking order cannot be pinned down.

“Only when everyone turns off the rocking will we know who really has a fast car,” an Aston Martin engineer told Auto Motor und Sport.

F1 will show up in Bahrain, for the official pre-season test that will be open for fans and with full coverage, so that would be an ideal chance to see which of the teams has got on top of the “porpoising” problem.