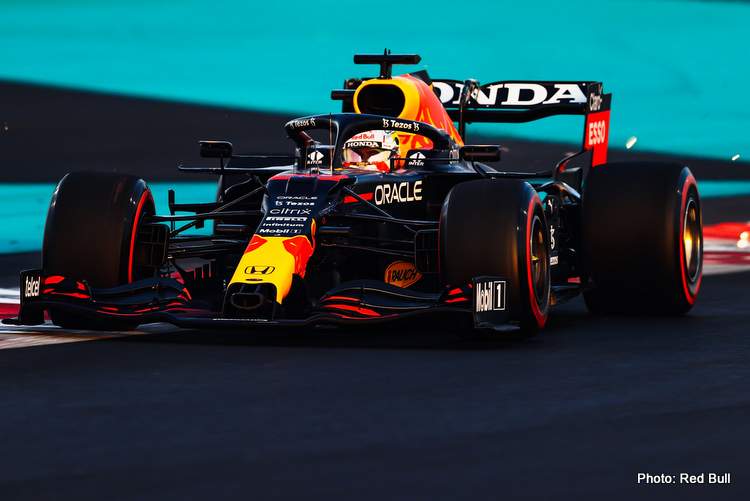 Qualifying for the 2021 Formula 1 Abu Dhabi Grand Prix did not disappoint, as Lewis Hamilton and Max Verstappen slugged it out for one final time, the Dutchman doing the hammering this time.

Pole position for the Verstappen took pole in Abu Dhabi ahead of title rival Lewis Hamilton with a time of 1:22.109, an astronomical 13.137s faster than last year’s, and over three tenths faster than the Briton, with Red Bull employing team work, with Sergio Perez giving his teammate a tow, on a day when Red Bull simply outsmarted Mercedes.

Verstappen on pole, but…

It was no doubt a great qualifying performance from Verstappen, but it came at a price, as he will have to start the race on the Soft tyres tomorrow, as he flat-spotted his Medium set of tyres he should’ve qualified on into Q3 trying to go faster, prompting the team to send him out on a new set of Softs to make sure he starts the race on a healthy set of tyres. But that is tomorrow’s headache to worry about now.

“I’m incredibly happy with this, this is what we wanted, but it’s never easy, especially with their form in the last few races.”

On pole for the final race of an incredible season 🚀

Hamilton, who seemed to be a favorite for today’s pole all weekend, but boy how things change in that crucial Q3 part of qualifying, as the seven-time World Champion simply had no answer for his rival on Saturday evening around Yas Marina Circuit.

Hamilton said in the post-qualifying interviews: “Max did a great lap and we couldn’t answer that today.

“He fully deserves the pole.

“But we think we’re in a good position with our tyres tomorrow and we’re hoping for a good race.

“I’m still on the front row and we’ll navigate from there,” Hamilton concluded.

A welcome surprise in Q3, was Lando Norris taking third behind the two Title contenders, albeit 0.822s off pole, but nevertheless, an impressive performance from the young British driver, after a run of difficult races for him and his team recently.

Evidently elated about his result, Norris said: “I went pole, didn’t quite work out, I was a little bit off!

Asked how he planned to act around the two drivers ahead of him that will be fighting for the championship, Norris said: “I kind of just want to see everything unfold, but I don’t want to get involved too much.”

Sergio Perez was fourth in the sister Red Bull, having done a great job giving his teammate a tow, on an evening when Red Bull had to pull out all the stops in order to beat the Hamilton/Mercedes combo. The Mexican was 0.838s off Verstappen’s time.

Carlos Sainz was fifth for Ferrari a further 0.045s off Perez’s time, with Valtteri Bottas a disappointing sixth, almost one second down on the polesitter’s time.

Seventh went to Ferrari’s Charles Leclerc, the Monegasque over one second down on the best time, and had the impressive Yuki Tsunoda breathing down his neck in eighth place, and less than one tenth adrift.

Esteban Ocon outqualified his teammate Fernando Alonso, and was ninth for Alpine ahead of Daniel Ricciardo who rounded off the top ten and was almost half a second slower than the high-flying Norris.

The second round of eliminations saw the top teams trying to progress into the third round of qualifying on the Medium tyres, as slower teams went for the Softs to ensure a Q3 presence.

First to miss out on the top ten was Fernando Alonso in the Alpine who missed the cut by 0.012s only settling for 11th, and was followed by Pierre Gasly in 12th, who surprisingly couldn’t make it into Q3 after a string of recent strong qualifying performances, as he reported brake problems over the team radio.

Lance Stroll was the first of the Aston Martins in 13th place followed by Antonio Giovinazzi in 14th, 0.185s off the Canadian’s pace.

Sebastian Vettel was also out in Q2, complaining about traffic on his way to 15th, 0.239s slower than his teammate.

A brief Red flag was raised almost half way through Q1, to clear a bollard that was hit and removed by Mick Schumacher in the Haas at the final corner, with Norris going over it on his flying lap without sustaining any damage.

After the session was resumed, the first casualties of the Abu Dhabi qualifying was Nicholas Latifi who was 16th, and ahead of his teammate George Russell who finished 17th 0.085s off his teammate’s time, the Briton failing to deliver any of his usual Saturday magic on his final qualifying with Williams.

Kimi Raikkonen’s final qualifying session of his career was one to forget as he finished 18th, followed by Haas’ Schumacher in 19th, with 20th going to Nikita Mazepin, the Russian 0.779s slower than the German. 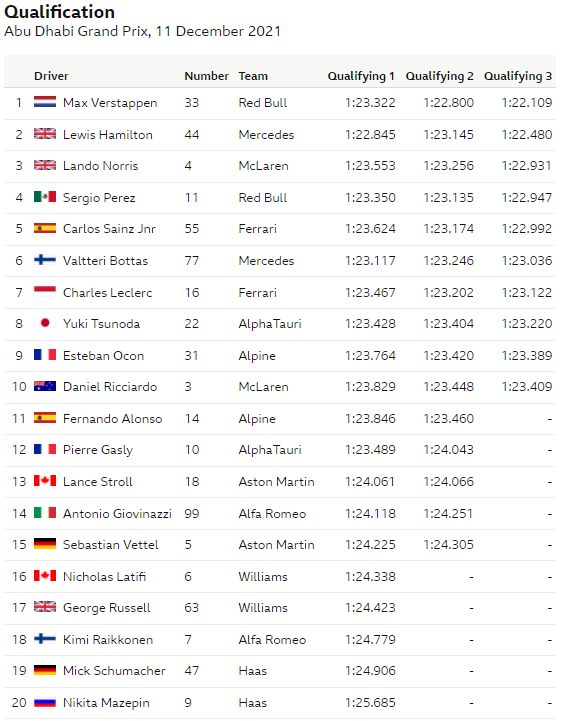 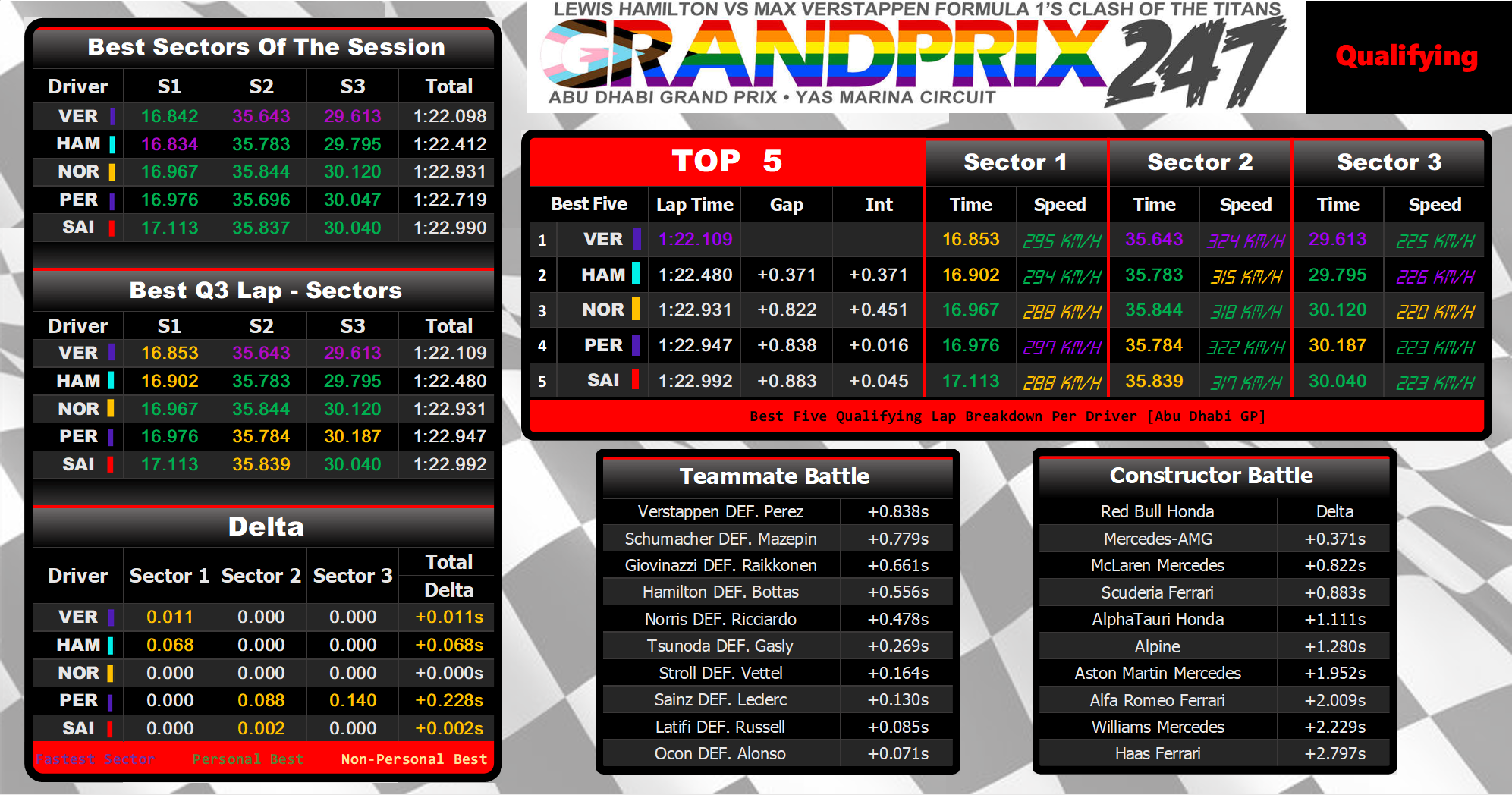