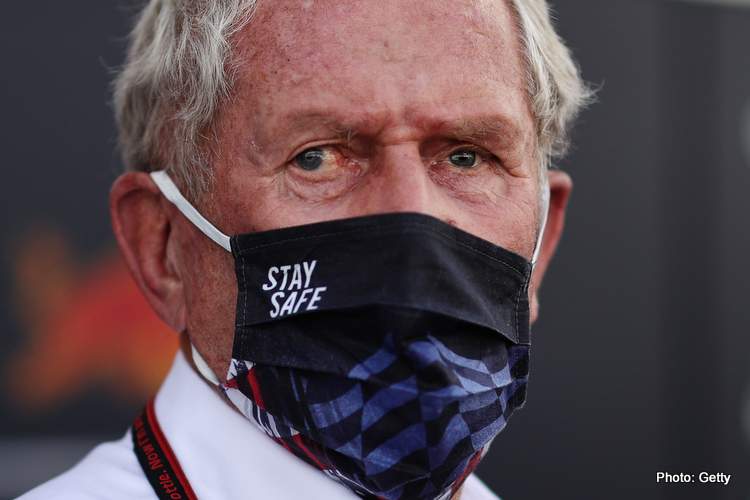 Granted much was said in the war of words that erupted after one of the most contentious races, between two title contenders, the sport has ever witnessed.

It’s blockbuster stuff this, Hamilton the last of F1’s Old Guard hanging on to the throne with Max Verstappen pretender to it and head of the sport’s New Guard, both backed by their formidable teams – Mercedes and Red Bull.

There is nothing in it between the title rivals with one round to go on Sunday night in Abu Dhabi, the grenades are being lobbed both ways.

Shell-shocked on a night that all but scuppered his team’s F1 Constructors’ Title ambitions, typically Marko was immediately on the defensive regarding the collision between Max and Lewis. aka “The Lap 37 Incident”.

Live on TV, immediately after the race Marko denied the “brake-test” that Hamilton radioed his team about happened at all: “We can refute this move that Hamilton complained about. According to our data engineer, the brake pressure was constant. Hamilton simply miscalculated.”

In his Unibet column after, double F1 World Champion Mika Hakkinen, reviewing the incident, explained it aptly: “The FIA has revealed that Max’s car produced 2.4G-force under braking.

“To give you an idea of what that is like, a high-performance road car with ABS (anti-lock braking) would produce about 1.2G under maximum braking.  This was almost twice that, and we could see Max slowed from 8th gear to 3rd gear in the process.

“Whatever the reason, it was not positive racing and the FIA was right to apply a penalty after the race,” added Hakkinen.

With these post-race facts at hand now, Marko apologized for his remarks: “At the time of the television interview, I passed on exactly the information that I had previously received from the engineers.

“They obviously weren’t right, so I’m sorry,” he said in an interview with F1-Insider.

Since Sao Paulo the stats have not been kind to Red Bull, as Mercedes found a new head of steam which has made Hamilton invincible; in Jeddah it got worse for the challengers as Sergio Perez’s DNF and Verstappen’s second place means the five points they lagged behind Mercedes in top spot is now 28 and almost out of reach.

On the F1 Drivers’ Championship front, Verstappen and Hamilton are now tied on points, the Dutchman ahead by virtue of nine wins to Hamilton’s eight this season. Whoever beats the other and scores points will be the 2021 F1 Champion, if both DNF or do not score points then Max will be Champ.

Marko and the team are already thinking ahead: “Hopefully the sad chapter of Saudi Arabia has now closed. In any case, we’re just looking ahead. We want to win in Abu Dhabi and thus win the title and we’ll do everything to achieve this; there will be no unfair actions from us.”

“In Saudi Arabia, we already had the pace to keep up with Hamilton. The new track in Abu Dhabi should be more favourable to us,” predicted Marko ahead of one of the most important races in F1 history.

An estimated 200-million viewers expected to tune in for the finale at Yas Marina Circuit tweaked for speed and overtaking for the occasion, with Verstappen looking to win again, as he did last year while Hamilton will be hunting his sixth victory at the venue to add to the ones he scored in 2011, 2014, 2016, 2018 and 2019.