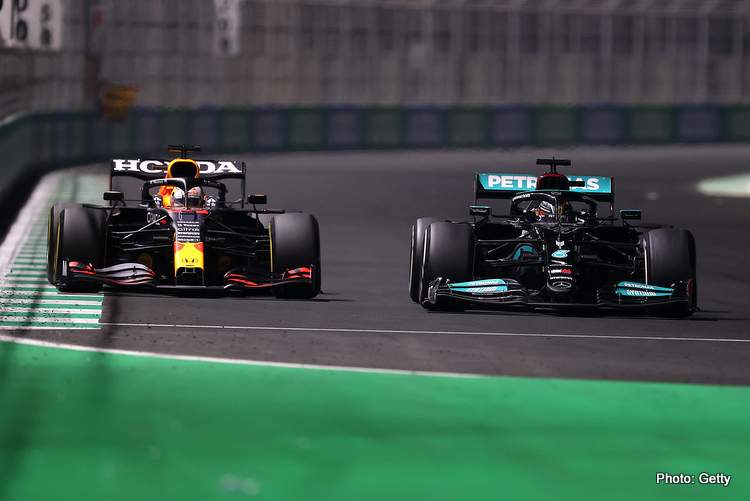 Mika Hakkinen was relieved neither Lewis Hamilton nor Max Verstappen was unscathed after their Battle of Jeddah on Sunday, the double Formula 1 World Champion enjoying this contest for the ages, but warns of the dangers amid the euphoria.

Hamilton and Verstappen were both lucky not to crash out of the race on more than one occasion. The two restarts were particularly perilous, while their subsequent duels on the night went over the limit at times – the Mercedes ramming the Red Bull, losing bits of its wing, a case in point.

Reflecting on an epic inaugural Saudi Arabian Grand Prix, Hakkinen wrote in his latest Unibet column: “Sunday’s Grand Prix was exciting and controversial in so many ways. But it proved that Lewis Hamilton and Max Verstappen are in the middle of one of the hardest battles for the World Championship in the sport’s history.”

Hakkinen, of course, weighed in on the biggest talking point of the race: “The lap 37 incident when both Max and Lewis went off the track at Turn 1 caused Max to be penalised.

With Max being asked to give the lead back to Lewis, the solution was clear says Hakkinen

“Driving a competitor off track should never be rewarded, and this of course reminds us of the incident in Brazil when Max and Lewis similarly went off track – with no penalty given.

“With Max being asked to give the lead back to Lewis, the solution was clear. When you have to let a car repass there is only one way to do it safely.  That is to make a clear move to one side, come off the throttle slightly and allow the natural speed differential to enable your competitor to repass you.

“What happened in Jeddah was dangerous. Both drivers knew that the DRS activation line lay ahead, so neither wanted to be the first across it since that would enable the other driver to overtake them on the next straight.

“We also now know that while Max had been given the instruction to allow Lewis to pass, Lewis had not yet been informed and was momentarily confused.  As a result, I think the teams and FIA will need to look at the process, and perhaps the technology used to send messages to drivers.

“Looking at what happened next, I do not believe that Max was ‘brake testing’ Lewis – that is, trying to force a collision that could easily have put both cars out of the race.

“Instead, he was trying to force Lewis to overtake him at the point.  However, the way he slowed, and the position of his car on the track, was definitely a problem.  The FIA has revealed that Max’s car produced 2.4G-force under braking.

“To give you an idea of what that is like, a high-performance road car with ABS (anti-lock braking) would produce about 1.2G under maximum braking.  This was almost twice that, and we could see Max slowed from 8th gear to 3rd gear in the process.

“Whatever the reason, it was not positive racing and the FIA was right to apply a penalty after the race.  While we can argue about the size of the penalty – considering it did not change the results – the message is clear.

“Dangerous driving will lead to a penalty and if the FIA see a repeat of this kind of driving in Abu Dhabi I believe the penalty will be severe and immediate.

“I don’t know how Lewis’s car survived the contact with the back of Max’s Red Bull, but the Mercedes front wing must be really strong!  Even with a damaged end-plate, Lewis managed to set fastest laps and take the win.”

Despite the contact and carbon fiber bits that flew off the car, Hamilton continued to have the speed in his car to attack the Red Bull to eventually win the race and with it tied the Championship on points heading to this weekend’s finale in the UAE.

If neither finish in the points, Verstappen will be 2021 F1 World Champion by virtue of having won nine races to Hamilton’s eight, other than that it will be; whoever crosses the Yas Marina finish line ahead of the other wins.

The prospect of this unique finale being decided on Sunday, whereby after 21 rounds the pair are still equal on points, has F1 enthralled, including Hakkinen: “That these guys are now going to Abu Dhabi on equal points is just brilliant. After 21 hard races, with lots of ups and downs, we now have a race to decide the World Championship.

“It’s a beautiful moment for Formula 1 but I want to see the title decided on the basis of pure racing.  That means the quickest driver and car combination should win on Sunday.  I don’t want to see penalties being used to determine who wins the World Championship – that would be a shame for Formula One and the most important people in the sport, the fans.

“While we use words like ‘battle’ or ‘fights’ to describe the intensity of the sporting competition between Max and Lewis, between Red Bull Racing and Mercedes, this is not a war.  We do not want to see cars colliding with each other, increasing the risk for everyone.  Formula 1 is dangerous enough.

“In Jeddah, we saw some fantastic racing, Lewis and Max pushing as hard as they possibly could.  The drama caused by the first red flag incident, when Mick Schumacher suffered an accident, was almost unbelievable because it immediately removed the strategic advantage Mercedes enjoyed and handed a real opportunity to Max since he was able to change tyres in the pit lane.

“Max’s first restart, when he drove off the track to take the lead from Lewis, was a brave move but ultimately a waste of time since he had to hand the place back.

“His second restart, when he went for the gap on the left as Lewis moved right to cover off the impressive Esteban Ocon, was just perfect. This is the kind of manoeuvre which can win a race or even a championship.

“I have always been of the opinion that you have to race positively, not negatively.  Winning the World Championship should be all about speed, precision, race craft and proving that you can beat the other driver in a straight fight – a sporting fight.

The Lap 15 restart that had us all holding our breath 🍿