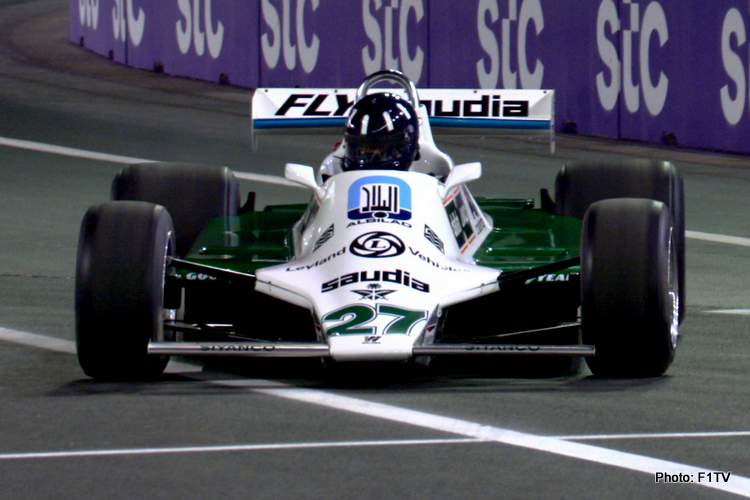 Almost forgotten in the aftermath of an outrageous Saudi Arabian Grand Prix, on Sunday Formula 1 united in tribute to Sir Frank Williams, the much-loved and inspirational founder of the team bearing his name, who passed away last weekend.

Shortly before Sunday’s race in Jeddah, the drivers and team principals were joined by F1 CEO Stefano Domenicali and FIA president Jean Todt to observe a minute’s silence in his memory, standing in a circle around an image of him on the grid as drivers placed their helmets on the ground. This was followed by applause.

Sir Frank Williams died last Sunday at the age of 79.

A Williams FW07 car, driven to the world title by Alan Jones in 1980, did a lap of honour around the Jeddah Corniche circuit. Damon Hill, who won the world title with Williams in 1996, drove it – pictured above

After the race, visual tributes to Williams were to be placed on the podium with the Williams team invited to join.

Williams took his motor racing team from an empty carpet warehouse to the F1 summit, overseeing 114 victories and a combined 16 drivers’ and constructors’ titles.

The team won back-to-back constructors’ championships and Keke Rosberg was champion in ’82.

The inspirational Williams went from being a traveling salesman to the longest-serving team boss in the sport’s history, and he was knighted in 1999.

F1 unites for a moment of quiet reflection to remember a legend of our sport. 💙

Now let's go out there and put on a race that Sir Frank would have enjoyed. 💪 pic.twitter.com/9x4RYpAH5S

Drivers carried tributes to Williams on their cars this weekend.

“I’ll remember Frank with fond memories,” said Williams driver George Russell, who is joining Mercedes next year. “He was such a great human being and so well loved by everybody in the team and the wider community of Formula One … He’ll always be a legend.”

Russell is replacing Valtteri Bottas, who had nine podiums racing for Williams from 2013-16 before joining Mercedes after Nico Rosberg’s sudden retirement following his world title.

“Frank, I’ll remember definitely as a friend, as a character that motivated a lot of people. The whole factory was racing for Frank because it was his passion,” Bottas said. “He gave me my opportunity to get into Formula One. Without Frank, and him giving me that opportunity to show myself, I wouldn’t be sitting in this seat right now.”

Williams’ success was even more remarkable considering he suffered a horrific car crash in France that left him with injuries so severe that doctors considered turning off his life-support machine.

But his wife, Virginia, ordered that her husband be kept alive and his sheer determination and courage enabled him to continue pursuing his sporting passion, albeit from a wheelchair because of a spinal fracture.

He stepped back in 2013, the year in which his wife died, allowing his daughter Claire to become deputy team principal until the Williams team was sold in September last year after being in the family for 739 races.