Wolff: A brutal energy running through the whole team 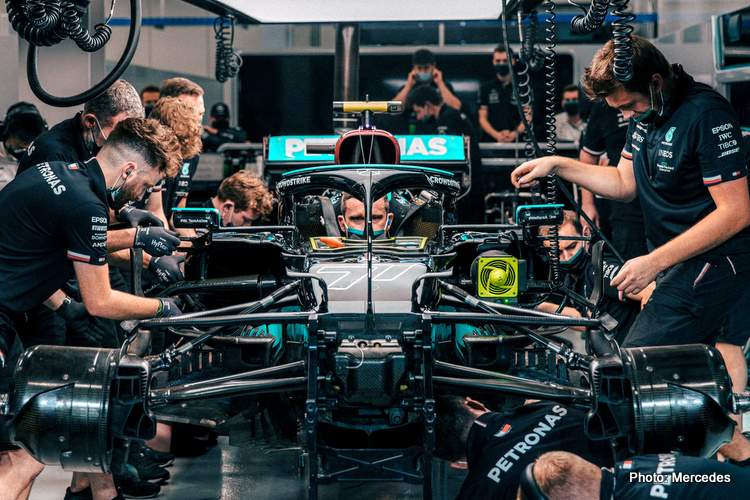 At this critical stage of an engrossing 2021 Formula 1 season – with Max Verstappen eight points ahead of Hamilton in the F1 drivers’ title race and Mercedes leading Red Bull by a mere five points in the constructors’ race – this could be the German team’s most important front-row lockout ever.

And Wolff knows it; he said in the team report: “What a crazy session! We expected to be stronger today, we have a quick car and it looked like those quick corners would suit us, but like so many times this season, you’re constantly surprised.”

Indeed this season has been topsy-turvy, with tiny margins between the contenders, the pendulum swinging session by session, previous form books torn up in a season of unpredictability.

Wolff explained: “Austin should have been our track and wasn’t, and then suddenly in Brazil we were performing really well, so you just never know. It was important that we kept attacking and attacking, and we’ve ended up with a front-row lockout which is a big advantage.

“There is a brutal energy running through the whole Team. We just look forward and keep pushing, and pushing, and when you go in the debrief room or in the garage, you don’t need to talk because you can feel the energy and how buzzed everyone is,” revealed Wolff.

That energy and buzz was tested in Jeddah when the PU on Bottas’ car needed changing in the short time between FP3 and Qualifying. All hands on deck, including some of Hamilton’s crew, ensured that the #77 car was ready for business.

Mercedes trackside boss Andrew Shovlin shared insight into a hectic Saturday in the Mercedes pit garage: “It’s been a very busy day. The final practice session wasn’t great for us, we were doing OK on the Hard tyre but not finding great grip on the Soft.

“We found an issue with Valtteri’s power unit just before the end of the session so had to swap that out for another in his pool just before qualifying; it was a lot of work but everyone in the garage did a great job to get the car ready in time.

Shovlin: We’re pleased to have the front row, it doesn’t feel like we’ve earnt it

“Our struggles didn’t disappear going into qualifying, we were able to do reasonable lap times but every time Max went out he’d beat the time we just set, and his final run showed clearly that they have the upper hand here on a single lap.”

While Hamilton and Bottas ticked all the boxes for their one-two, they were fortunate that Verstappen missed a tick, two-tenths up on Hamilton the Red Bull slapped the wall exiting the final turn on its final flyer in Q3, gifting the front row to his rivals.

Shovlin admitted to the good fortune that befell his team at Verstappen’s expense: “Had he completed the lap, there’s no way we could have matched it so whilst we’re pleased to have the front row, it doesn’t feel like we’ve earnt it.

“It’s hard to know what to expect [in the race]; we were good on the long run on Friday but Red Bull seem to have found a chunk of pace overnight and if that translates into the long run, it’s bound to be close,” predicted Shovlin.

Putting him on pole for Sunday’s crucial race in his title battle with Max Verstappen 🏆#SaudiArabianGP 🇸🇦 #Pirelli @pirellisport pic.twitter.com/I7H6kn7z02