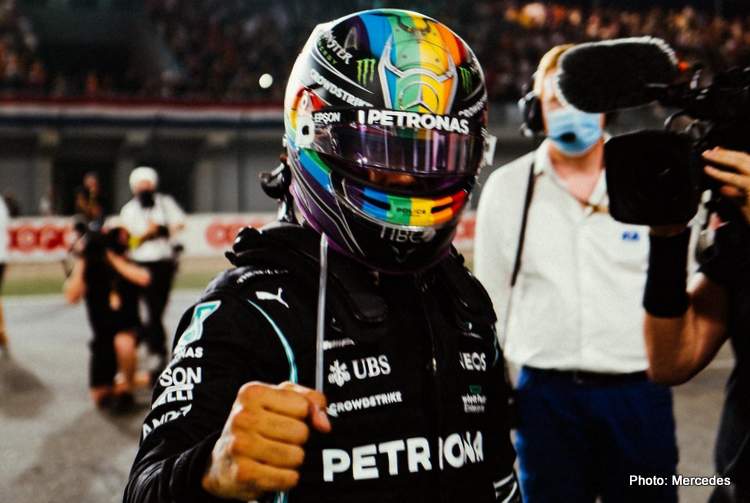 The rainbow helmet worn by Lewis Hamilton in Saudi Arabia, and his stance on human rights, reflects a bigger shift in Formula 1’s willingness to address issues avoided in the past, according to Racing Pride co-founder Richard Morris.

Seven times F1 world champion Hamilton, who first wore the Progress Pride helmet in Qatar last month in support of LGBTQ+ rights and is racing with it in Jeddah this weekend, told reporters on Thursday he felt “duty-bound” to speak out. read more

Both Gulf countries are hosting Formula 1 for the first time this year and the Mercedes driver said Saudi law relating to the LGBTQ+ community was “pretty terrifying“.

Saudi Arabia has no codified legal system and no laws regarding sexual orientation or gender identity. Judges have convicted people for “immorality”, having sexual relations outside of marriage, and homosexual sex.

Morris, whose Racing Pride movement was founded in 2019 to create visibility for the lesbian, gay, bisexual and transgender community in motorsport and to challenge negative stereotypes, said Hamilton’s actions were inspiring.

“I think this year there’s been a big shift in Formula 1 that we’re seeing across a number of drivers and teams where there is now a willingness to address these topics of inclusion,” he told Reuters.

“I think it’s a really important shift … Formula 1 is visiting these territories which have different human rights records to what we have in Europe but continuing to champion its values as it does so. And that’s really powerful I think.”

It doesn’t change things necessarily overnight, but it does begin conversations that I think are important

The team’s four-times F1 world champion Sebastian Vettel wore rainbow sneakers in Hungary and again in Saudi Arabia, where he donned a “Same Love” T-shirt on the starting grid as well as racing with a Pride flag helmet design.

The German organised a go-kart race for women, who were not allowed to drive in Saudi Arabia until 2018, ahead of the grand prix in Jeddah.

“Visibility and representation isn’t everything, and it doesn’t change things necessarily overnight, but it does begin conversations that I think are important,” said Morris, one of few openly-gay professional racers.

Hamilton has used his platform as the sport’s most successful driver of all time to champion equality.

Formula 1 launched a “We Race As One” campaign last year but the Liberty Media-owned sport has been heavily criticised by campaigners for racing in countries with poor human rights records.

Morris said racing in Saudi Arabia did provide the opportunity to speak out: “Of course Lewis is speaking to his global fanbase, to his supporters, to allies that already exist around the world and people who agree with his message intrinsically.

“But also he’s showing a support that perhaps otherwise wouldn’t be there within the region. He’s raising this issue of human rights and starting those conversations. And I think once you start those conversations, there’s then a need for responses.

“I think the more we can shine a light on these issues and start these conversations and then bring in visible representation of these minority communities as well, the more we can educate people towards inclusion.”

Morris said that while it was “fantastic” to have allies speaking up in a sport once famed for its macho image, there was no top level LGBTQ+ driver and no female racer.

“That does show there’s a lot more work to be done throughout motorsport to encourage that inclusion and ultimately representation – not just of allies but also of LGBTQ+ people,” he said. (Reporting by Alan Baldwin)