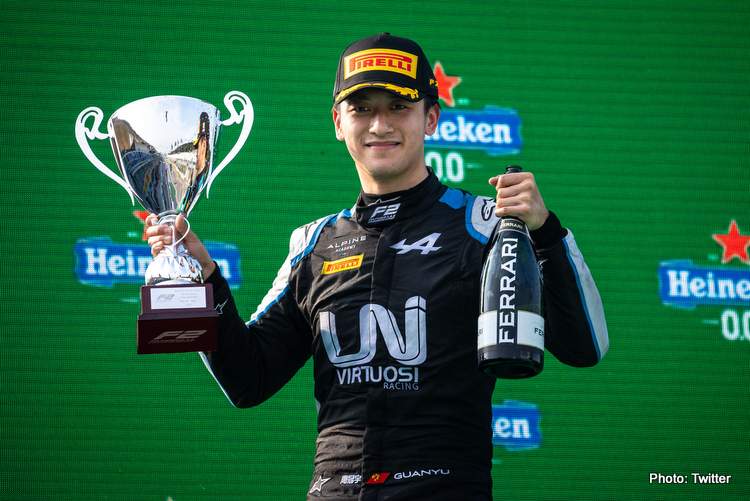 After much speculation about the occupant of the Alfa Romeo seat next to Valtteri Bottas, the Hinwil-based squad finally confirmed that Guanyu Zhou for 2022, which makes him the first ever Chinese driver to burst onto the Formula 1 scene. So will he shine?

The 22-year old is in his third season in F2, and currently sits second in the standings behind Oscar Piastri by 36 points, the Chinese driver having 3 wins to his name. His first two seasons in F2 have been far from stellar, finishing 2020 in sixth, and 2019, his first F2 season in seventh.

On the other hand, F2 Championship leader, Piastri, was confirmed as a reserve driver for Alpine in 2022.

Many names have been linked with the now-departing Antonio Giovinazzi’s seat at Alfa Romeo who – other than Zhou – include his fellow Alpine junior Piastri, ART F2 team driver Theo Pourchaire, and IndyCar driver and Alfa Romeo reserve driver Callum Ilott.

With Zhou clearly not on the same level as other F2 stars that graduated into top flight, George Russell and Charles Leclerc being prime examples, and as the latest F1 rookie, Yuki Tsunoda, who was promoted into F1 without having a stellar F2 record seemingly out of his depth, how will Zhou fare in F1 and was he promoted purely on his capacity behind a single seater’ wheel?

Our team have their say.

Kevin Melro: Guanyu Zhou becomes the 20th driver the graduate through the FIA Super Licence points system, a system I personally have many reservations about.

The rookie Chinese driver may find some comfort with Ferrari power as the All-Star karter was scooped up and added to the Ferrari driver academy before heading to Renault, now Alpine. He’ll have a tough gauge in Valtteri Bottas. Head down, get after it, and as with all new drivers to the series, good luck and enjoy!

Mark Kay: I am positive about Zhou’s progression to an F1 race seat in 2022. I am a firm believer in the FIA’s Super Licence pathway to F1 which reassured me that he is talented enough to be there.

Whilst obviously talented enough to tread water in F1, I feel Giovinazzi has had more than a reasonable chance to prove his worth, but has been unable to convince Alfa that continuing with him is a value proposition.

I wish Zhou luck, he may need it, though.

Jad Mallak: I can’t help but feel that the choice of having Guanyu Zhou at Alfa Romeo in 2022 is more about the reported $ 30 Million in sponsorship money he brings into the team, rather than his talent. Add on that, China is one of the biggest audiences in the world which F1 would like to please.

No doubt that Zhou is a decent driver, but let’s keep in mind that he has been in F2 for three years, and is currently second in the standings with no guarantee that he will secure the title this year. So he hasn’t set the world alight.

I am in no way belittling pay drivers, as many of those have proven their worth, and racing in F1 requires money after all. But the problem becomes when money out-qualifies talent which has been a more frequent occurrence recently as F1 teams struggle to make ends meet.

Having said that, I hope that Zhou proves to be worthy of his F1 seat, being one of the twenty most coveted seats in the world of motor racing.

Paul Velasco: Guanyu Zhou has been impressive in Formula 2 this season, lying second with six points paying rounds remaining in the championship, battling formidable Oscar Piastri for the title.

It is fair to say that after three years in the Formula 1 feeder series, he is ready at a stab at the big time in an era in which too many mediocre drivers stay in their seats for far too long, denying new talent opportunities to show up on the big stage.

Out with the old, in with the new.

That Zhou is Chinese is an added bonus because there is a huge fanbase there to be explored. Asia has taken strongly to F1, in Japan it is one of the most watched sports. Fans passionate and knowledgeable.

Drivers can galvanize countries, but only if they are successful. How successful will Zhou be? No one knows. He might be one of those drivers who find another level when they seize their biggest moment, or could be just another journeyman just happy to be on the grid.

Time will tell, but for now Zhou’s inclusion on the grid is a good thing. Can he make the most of it? That is the big question.