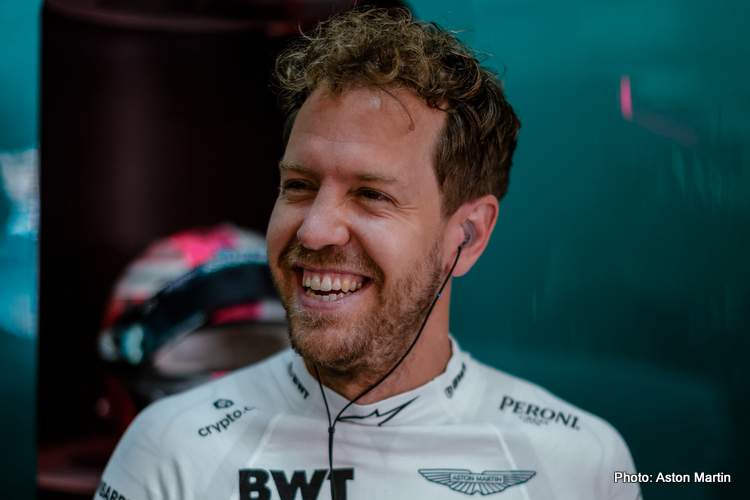 Sebastian Vettel can be quite the comedian sometimes. After Saturday’s 2021 Sao Paulo Sprint, the German jokingly told his race engineer he was going to touch Lewis Hamilton’s rear wing.

Vettel actually had a decent Sprint race, qualifying and starting 11th, before going on to finish tenth, which will automatically turn into ninth after Hamilton’s engine related five-place grid penalty is implemented.

Speaking after the Sprint race in his team’s press release, Vettel said: “I made a good start and gained a couple of places, but we had to fight hard to stay there with fast cars, such as the McLaren [of Daniel Ricciardo], behind us.

“I was in the train of cars, benefiting from the DRS, which certainly helped,” he went on. “The race pace was decent but starting on the Medium meant that we were faster towards the end [compared with those on Softs].

“I think it will be similar tomorrow,” the four-time Formula 1 World Champion predicted.

“It is a long race, and we will need to fight hard to score points because there are some quicker cars, including Lewis [Hamilton], behind us,” the 34-year-old concluded.

Vettel the comedian makes an appearance

The Sao Paulo Sprint race was held right after news were announced that Lewis Hamilton would start from the back of the Sprint race grid, as his Mercedes failed the FIA’s scrutineering post qualifying for a DRS irregularity, with Max Verstappen fined 50,000 Euros for touching Hamilton’s car in Parc Ferme after qualifying as well, thus violating the Parc Ferme rules.

Hamilton’s situation is a serious one that might end up affecting his title defense campaign this year, despite his stupendous damage-limiting drive in the Sprint from 20th to fifth.

But Verstappen’s imprudent actions were the source of several jokes and memes, mostly referring to Vettel who is known as “Inspector Seb”, for frequently checking out his rivals’ cars after sessions.

Vettel was clearly in a good mood after the Sprint race, which brought up the comedian in him – a side of his personality the F1 community has become used to – and just had to make a quip under the circumstances.

the rear wing joke and the whole team laughing in the background, comedian 😂 pic.twitter.com/OIgWYOPzyL

After parking his Aston Martin in Parce Ferme behind Hamilton’s Mercedes, Vettel went on the team radio and said to his race engineer: “Thank you, I’m going to touch Hamilton’s rear wing.”

To which his engineer responded: “Don’t you dare, very expensive,” after which the German replied: “I’m joking. I’ll try the front wing, maybe it’s 25 Grand.”

A much welcomed humor in light of the tense atmosphere around the F1 paddock that was rife with rumors and anticipation since Saturday morning, awaiting the verdicts of Hamilton and Verstappen’s investigations.

Vettel, in his first season with Aston Martin, lies 12th in the Drivers’ Standings with 42 points, having had an up-and-down season where he scored two podiums one in Baku, and the other in Hungary.

He was stripped of his Hungary second place, which was given to Hamilton at the time, as there wasn’t enough fuel in his Aston Martin F1 car to provide the post-race mandatory sample to the FIA. Seb knows how Hamilton must be feeling in Sao Paulo. (Follow me on Twitter @MallakJad)