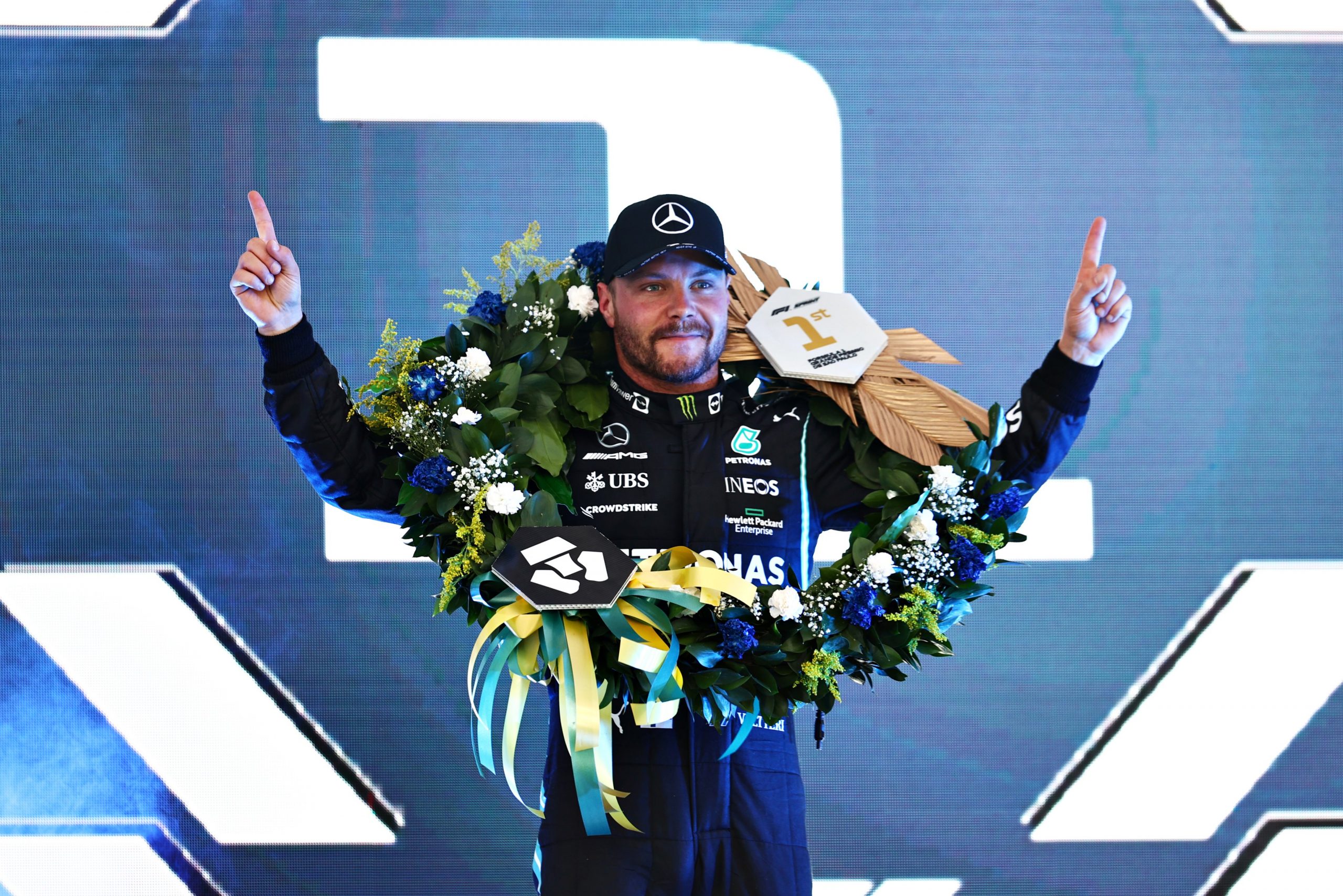 Max Verstappen missed the chance to aggravate the pains of Lewis Hamilton as he was beaten to the checkered flag by Valtteri Bottas who mugged the Dutchman at the start of the Sao Paulo Sprint.

The Sao Paulo Sprint race went ahead after the FIA delivered a bombshell that is the disqualification of Lewis Hamilton for the DRS infringement on his car. His title rival Max Verstappen, received a 50,000 Euros fine for violating Parc Ferme conditions, and thus inherited  the Briton’s top starting position.

Verstappen had a horrible start and was overtaken by Bottas and Carlos Sainz both starting on the Soft tyres, compared to Mediums for the Dutchman who reported “gear sync” issues over the team radio and suffering a brief off track moment defending from the Spaniard.

Verstappen however was soon past Ferrari of the fast-starting-Sainz on lap four and set his sight on chasing Bottas, and was hogging the Finn’s mirrors in no time, and getting too close for comfort several times but fell short in the end and had to settle for second, and the two Championship points that come with it.

Speaking after the Sprint Bottas said: “We knew the soft would be a benefit for the start and it worked, and then it was all about trying to survive until the end… I’m glad it worked out perfectly!”

Whereas Verstappen lamented his bad start: “The start wasn’t the best.

“I think our pace was quite good, but sometimes here you just can’t pass. We will try again tomorrow!” he vowed.

Sergio Perez also lost out to Sainz at the start and spent the 24 laps trying to chase the Spaniard for third, but Sainz held on to third on dying tyres keeping the Mexican at bay in fourth.

Sainz was clearly happy with his result and said in the post-sprint interview: “The first three corners I just went onto the attack.

“It was a bit tight with Checo and Max but we made it stick!”

Then came Hamilton, who started from the back of the grid. The Briton was up to 12th by lap seven making quick work of the cars in front, but then got stuck behind McLaren’s Daniel Ricciardo for 6 laps before passing and going on to finish a great damage-limiting fifth after a brilliant pass on Birthday Boy Lando Norris on the final lap.

Last lap, last on the brakes!

Hamilton though still has to take an extra five-place grid drop tomorrow for his engine penalty, which means another fight through the field for him, but if he was able to make up 15 places in 24 laps, just imagine what he can do with 71 laps to play with.

Charles Leclerc had a mediocre race compared to his teammate, and ended up one place back from where he started, finishing seventh behind McLaren’s Norris.

Pierre Gasly had a bad start to the race as well losing several places and in the end was only good for eighth, as the Frenchman seems unlucky in sprint races if we keep what happened to him in Monza in mind.

Rounding off the top ten was Aston Martin’s Sebastian Vettel, after starting 11th on the grid, and spent his time within DRS range of Ocon, without being able to make a move on the Alpine driver. Vettel’s teammate Lance Stroll finished 14th gaining only one place.

Outside of the top 10, it was notable that Daniel Ricciardo was 11th after losing three places, and not able to recover within 24 laps.

Antonio Giovinazzi was 13th for Alfa Romeo, gaining one position from where he started, but contact with his teammate Kimi Raikkonen, meant the Finn lost five places to finish 18th.

Yuki Tsunoda was 15th for AlphTauri, with Nicolas Latifi and George Russell finishing where they started in 16th and 17th respectively, before Raikkonen.

Mick Schumacher was 19th ahead of Nikita Mazepin in 20th.

With the sprint race over, Verstappen now leads Hamilton by 21 points in the Formula 1 Drivers’ Championship. 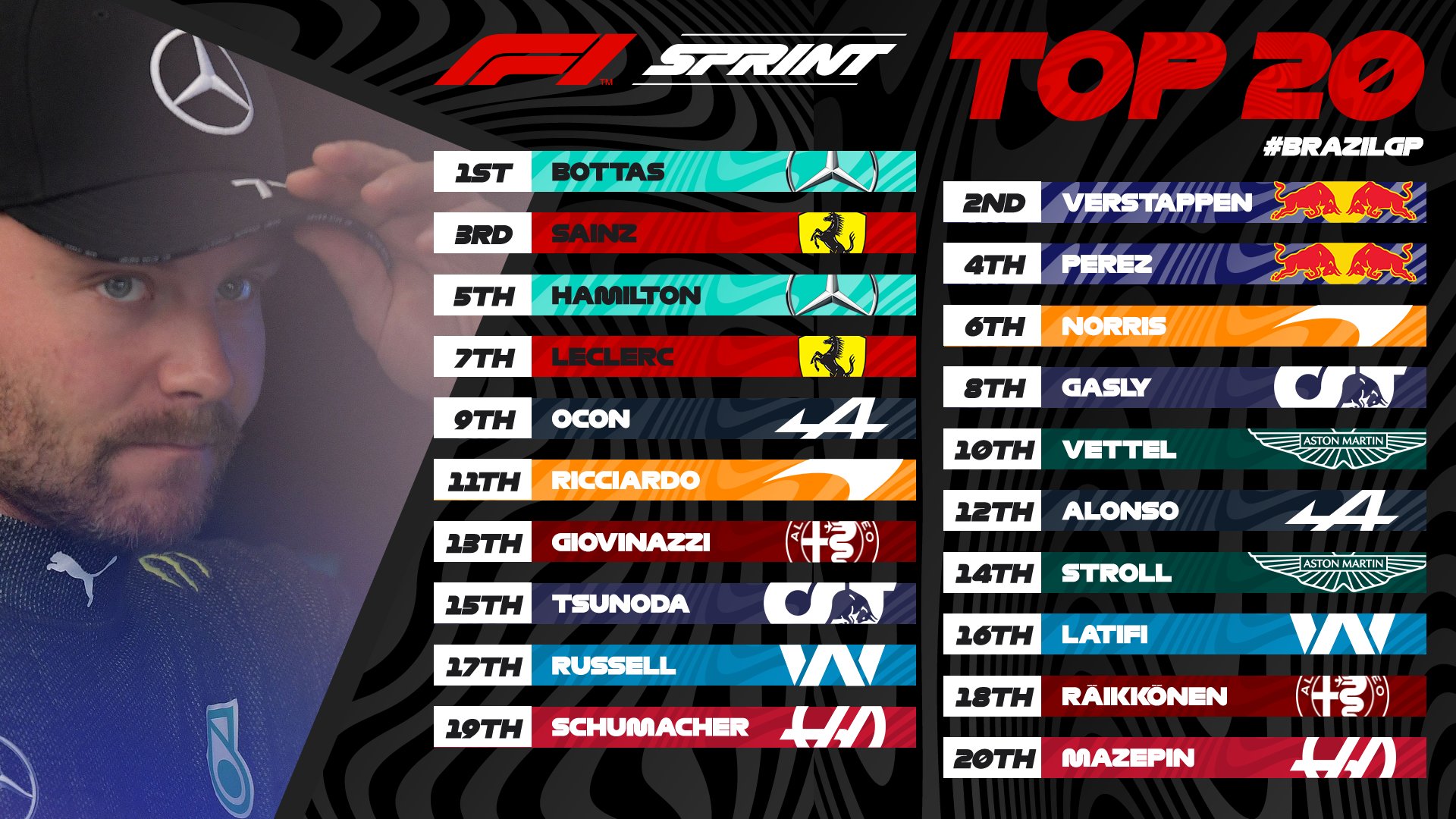