Verstappen: We were just lacking a little bit 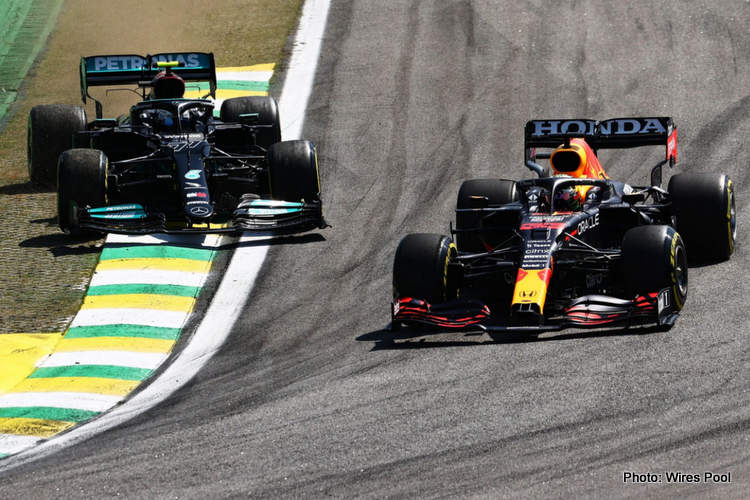 Max Verstappen had to settle for second best at the 2021 Sao Paulo Grand Prix, beaten by Lewis Hamilton on a day when he admitted that, as a team, they were just lacking.

Despite being expected to dominate in Brazil, Verstappen was always playing catch up to the blistering pace of Mercedes’ Lewis Hamilton.

And despite all the difficulties Hamilton faced over the weekend, from the five-place engine-related grid penalty, to the disqualification from the qualifying results on Friday, Verstappen was still unable to capitalize on his rival’s troubles, with second being the best he could achieve.

Verstappen muscled his way ahead of Bottas on lap 1 and was leading the race for some time, before Hamilton came chasing, ultimately beating him to the flag.

The Red Bull ace, who delivered a credible performance nonetheless, reflected on his race in his team’s press release.

“I knew today would be difficult, but I did everything I could, we were just lacking a little bit,” he revealed. “At least it was a fun race, of course I would have liked to have won but realistically I think this was a good result.

“Lewis and I were fighting for position on multiple occasions, I think it was hard racing but good racing and that’s how it should be,” Verstappen said, probably referring to the moment where he out-braked himself defending from Hamilton, running wide and taking the Briton along for the ride.

The Stewards decided that no investigation was required, much to the dismay of Mercedes and Hamilton.

The Dutchman went on: “I was hoping for a little bit more performance but this result is definitely the maximum we could do.

“Top speed wise it was tough to defend, you can clearly see when they take a fresh engine that it gives them a bit more power, so hopefully that will die down over the coming races,” he explained.

“There are three races coming up that will be completely different again, so we’ll see how it goes,” the Championship leader concluded.

Perez, who was on a run of consecutive podiums recently, could not continue the streak and had to settle for fourth, but did well to take the fastest lap of the race on a final-lap attempt, denying Hamilton the perfect score.

“It was close today and it was fun, but I am not here to have fun, I am here to deliver,” the Mexican said in Red Bull’s media brief.

“I had a great start but then it was very difficult to hold Lewis back, I tried my best to hold onto him but I couldn’t, he was flying!

“Then we were ahead of Bottas by two seconds, we had the position and we had the podium but two laps later the virtual safety car came in.

“That timing was extremely unlucky for us and it worked perfectly for him, he managed to do the undercut and then pull five seconds away from us,” Perez lamented.

“It is a bit of a shame we lost the podium but I was able to build a big enough gap to the Ferrari in fifth to pit and go for fastest lap, which is an important point for the team.

“That straight-line speed of the Mercedes is just unbelievable, we were not able to match them and today they were on another planet,” the 31-year-old admitted.

“Ultimately it is a good result for us today, I don’t believe there is much we could have done differently, it’s just a shame because we should have finished ahead of Bottas had it not been for the VSC.

“Today the luck wasn’t with us but there are still three races to go and everything to play for so we will keep pushing.

“Now we look forward to Qatar and hopefully there we can be competitive,” Perez concluded.

Verstappen leaves Brazil with his lead in the Formula 1 Drivers’ Championship over Hamilton reduced from 19 to 14 points, which may prove costly in such a closely contested season, and should Mercedes maintain the pace they had in Sao Paulo.