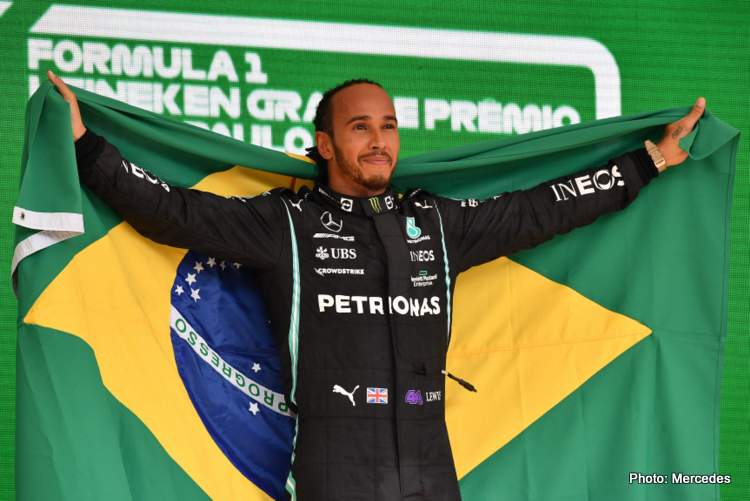 Lewis Hamilton drove as if his life depended on it to win the 2021 Sao Paulo Grand Prix at Interlagos, beating a feisty Max Verstappen to close the points’ gap at the top of the standings.

It must rate as Hamilton’s greatest race which actually began yesterday from last on the grid, half an hour later he was fifth! 24 hours later he lined up tenth on the grid thanks to a five-place engine-related grid penalty.

Valtteri Bottas lost the lead to Verstappen when the lights went out, as the Dutchman took the lead and controlled the early phase of the race.

Hamilton was fully switched on, his latest PU on the Mercedes was clearly the best of Formula 1’s finest litter. And the driver delivered like only he can.

From tenth, by lap five he was third, Bottas giving him a free pass with Sergio Perez in second next on the Briton’s radar. By lap 18 Hamilton was second and stalking Verstappen.

The Red Bull driver dug deep into his book of racing’s dark arts including a squeeze when Hamilton attempted his first overtake, followed by a slew of dodgy more than one move blocking moments. But let’s be honest, nothing the Mercedes driver will not do.

It was Hamilton in his full pomp, with the penalties and DQ, the man was down before this weekend. But supreme driving yesterday and today, coupled with an astonishingly quick car was what it took to win this enthralling Grand Prix.

It was a massive result for Mercedes as well as the reigning World Champion, with the F1 Drivers’ Championship points reduced from 19 before the race to 14 with three rounds to go. The German team leads Red Bull by 11 points.

Until today, no driver had won from further back than P8 on the grid at Interlagos 🏆@LewisHamilton started P10 today 🚀#BrazilGP 🇧🇷 #F1 pic.twitter.com/d6d8K9epb3

Hamilton: This one was for my Dad

“What a race!” declared a jubilant Hamilton: “The team did an amazing job. Valtteri did a great job to get as many points as possible.

“Coming into this weekend I never ever thought we would be able to close the gap like we had today. Then these things just kept going against us but it really shows for everyone, never give up. Never, ever stop fighting and that’s how I’ve really approached this weekend.

“It feels like the first because I don’t feel like I’ve had a win for a long time,” added Hamilton after notching up his 101st Grand Prix victory.

It was also a very popular victory as Brazilian fans, denied a driver in the top flight, have taken to Lewis in a big way and he paid tribute to them by donning the Brazilian flag as the anthems played on the podium.

It was also fitting that his greatest race was at Interlagos where the spirit of his boyhood hero Ayrton Senna looms large.

Once Hamilton got past, Verstappen could only watch the Black car disappear at a rate of about half a second. The Red Bull was lacking vis-a-vis the Mercedes.

Nevertheless, the Dutch ace gave it his best shot, he made a good start but needed to bully Bottas out of Turn 1 before nipping into the lead.

A momentum-swinging move? 🤔@LewisHamilton passes @Max33Verstappen on his way to a win in Brazil that keeps his title hopes very much alive 🚀#BrazilGP 🇧🇷 #F1 pic.twitter.com/4CbdWlOGsS

Verstappen: Damage limitation on a weekend that was difficult for us

At one point victory looked a sure thing for the #33 Red Bull, but when Hamilton was in his mirrors there was nothing Verstappen could do to defend, as the attacks came with still a dozen laps to go. He did what he could but Honda need to find some more horses for the next three races.

Verstappen said of his race: “We tried everything we could today of course. It was a good battle but in the end, we just missed a little bit of pace. We gave it our all today, it was a lot of fun. We still have a good points lead. Today was a bit of damage limitation on a weekend that was difficult for us. I’m confident that the coming races we will bounce back.”

Smart thinking during a VSC period gave Bottas a bonus pitstop which resulted in him leap-frogging Perez for an important third place for the team he will leave at the end of the season, also winning the Battle of the Wingmen.

Bottas summed up: “Lewis was in his own league today.”

Perez was fourth and scored a point for fastest lap, up to second at one point early in the race. He defended well from Hamilton, but in the end, again the RB16B simply did not have the top end to contain or challenge the W12 at Interlagos this weekend.

Ferrari destroy McLaren as they strengthen hold on third place

The battle at the sharp end was so captivating that it was as if there was other team in the show on Sunday, but of course there were, with Ferrari delivering another emphatic blow to McLaren’s third-place ambitions in the Constructors’ Championship.

Charles Leclerc and Carlos Sainz finishing fifth and sixth respectively with Lando Norris only good for tenth, and Daniel Ricciardo having a DNF for a miserable day in Brazil for the Woking outfit.

AlphaTauri driver Pierre Gasly tripped up at the start but recovered to finish seventh, ahead of the Alpine duo of Esteban Ocon in eighth and Fernando Alonso ninth, who did well to score double points finish for Alpine.

Sebastian Vettel was 11th on a disappointing day for Aston Martin, with Lance Stroll retiring after contact with rivals early on the race. 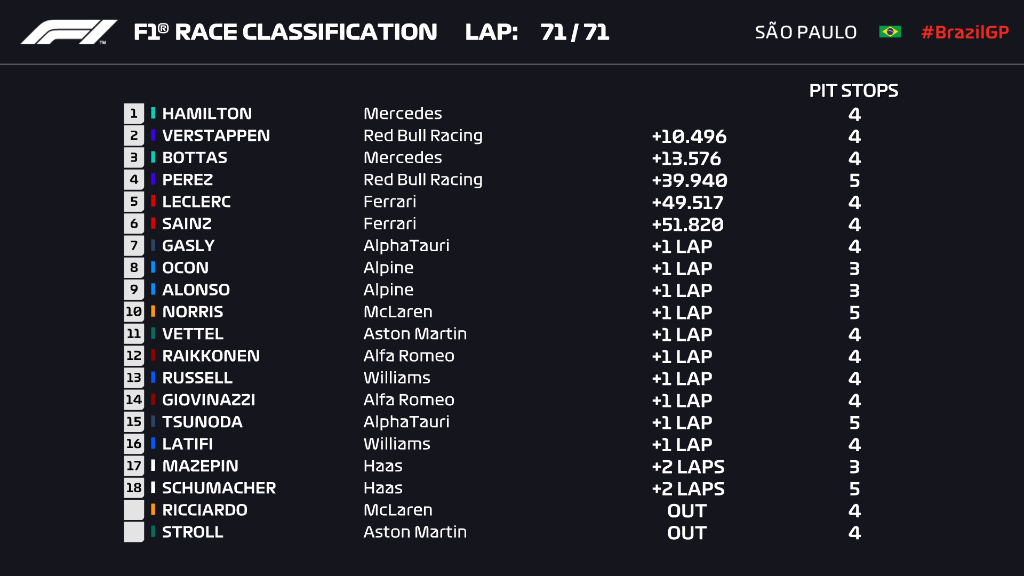