Norris: We did everything we could 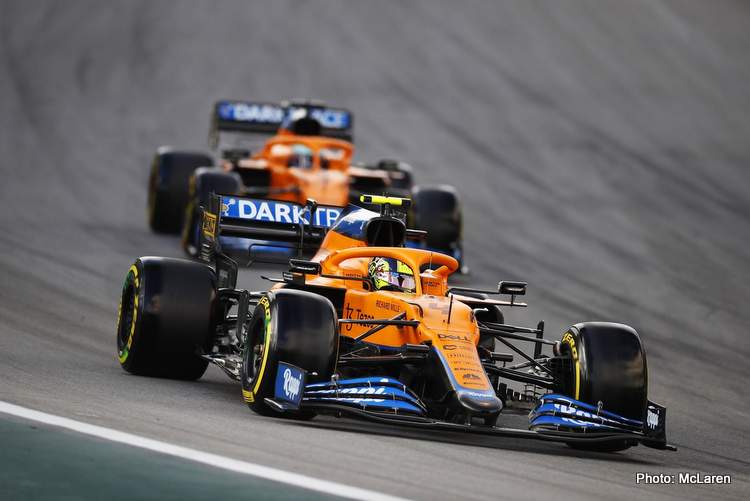 Lando Norris had a decent 2021 Sao Paulo Sprint on Saturday, and was able to finish ahead of the Ferrari of Charles Leclerc, admitting that they did everything they could as a team.

Norris started the Sprint race seventh behind Leclerc, was able to finish ahead of the Monegasque in sixth, but will start Sunday’s race in fifth, as the five-place grid penalty Lewis Hamilton becomes effective on the race starting grid.

“A good day for us with two positions gained,” Norris said in McLaren’s media brief.

“One on a very important competitor, which is the Ferrari, and one on the AlphaTauri, so we’ve given ourselves the best opportunity to score some big points tomorrow,” he explained.

“There were some positives and negatives from today in terms of how the car was and how confident I was pushing the car.

“We’ll try to make improvements overnight and see if we can come out even stronger tomorrow,” the Briton who turned 22 on Saturday went on.

“We did everything we could,” he insisted. “Even though we didn’t quite have the pace of the Ferraris, we still managed to get ahead of one of them.

Daniel Ricciardo, on the other hand, went backwards, having started the Sprint race eighth, but lost ground in Turn 1, and ended up 11th at the chequered flag.

The Australian spoke of his Sprint in the team’s press release: “The start itself was alright but the inside line into Turn One got a bit bottled-up and the positioning wasn’t so good.

“I’ll have a look at that and make sure I get on top of it for tomorrow,” he admitted.

“We want to try to move forward, so we’ll see what we can do.

“I’ll learn from today and come back fighting in the race,” Ricciardo summed up.

A day of mixed results

McLaren team boss Andreas Seidl, lamented how Ricciardo’s Sprint race unraveled, but was able to take some positives from the whole picture.

“Mixed results today in sprint qualifying,” Seidl said. “Lando had a good sprint, moving forwards, which was the objective, overtaking Gasly and Leclerc.

“Daniel unfortunately got boxed-in at Turn One and lost momentum and positions because of that, before being stuck in a DRS train for pretty much the entire race,” he explained.

“Execution from the team was good today, and the positive is that, in terms of pace, we were in a position to fight with the cars around us.

“Points are on offer tomorrow, and we’re fully focused now on race preparation,” the German insisted.

After losing ground to Ferrari in the Formula 1 Constructors’ Standings after the Mexico City GP, dropping 13.5 behind the Italian team, the gap became 14.5 after Carlos Sainz’s one-point-awarding second place finish in the Sprint Race in Sao Paulo.(Follow me on Twitter @MallakJad)