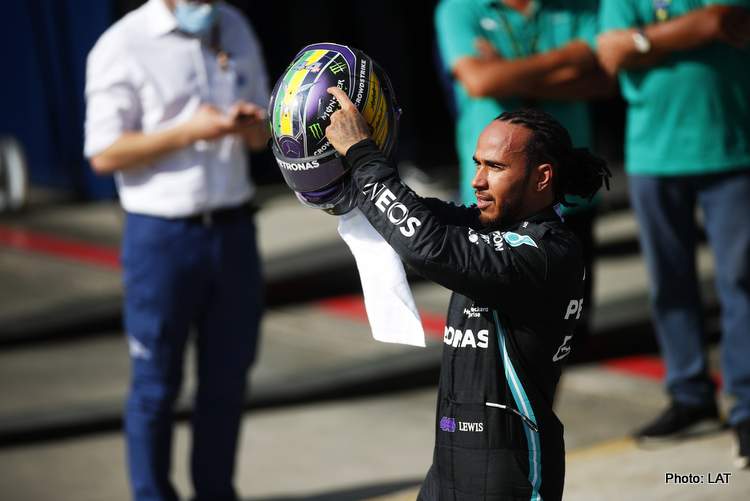 The seven-time Formula 1 World Champion was on the back foot as early as FP1 in Sao Paulo, when it was announced that he was going to take a new Internal Combustion Engine (ICE), earning a five-place grid penalty for Sunday’s race.

His difficulties where compounded when, after qualifying for the Sprint race, his DRS system was deemed illegal, leading to his disqualification from the session’s result.

But being Hamilton, he was unruffled as he went through the Sprint field like a knife through butter on Saturday, finishing fifth from 20th.

The Briton was even more electric on Sunday’s race after starting tenth due to is engine penalty, and was on Max Verstappen’s gearbox in no time, pressuring the Dutchman all race long, coming out victorious in the end. Typical Hamilton performance when he finds himself up against the wall.

After the race, Hamilton spoke of his dramatic weekend in Brazil in his team’s press release.

“I am so, so grateful for the incredible support I’ve had this weekend from the people of Brazil – I’ve not had this kind of support since Silverstone!” he began.

“To hear the crowd throughout the weekend has been really humbling. I’ve just been saying ‘Obrigado Brasil’ all weekend.

“What a race!” Hamilton exclaimed. “The Team here and at the factory did an amazing job, and Valtteri did a great job today to get as many points as possible.

“I was pushing as hard as I could from last on grid yesterday, and then with another 5-place penalty today.

“This was, I think, the hardest weekend I’ve had,” the Briton claimed.

“But my dad said ‘you reminded me of 2004’ when I was in Formula 3 in Bahrain – I started last and I finished 10th and then I finished 1st so, this one is for my dad,” an incident he also mentioned in the Parc Ferme interviews.

“Coming into this weekend I never, ever thought we’d be able to close the gap like we have today,” Hamilton revealed.

“And then things just kept going against us, but I think it really shows, just never give up. Whatever you’re facing, you’ve just got to keep pushing, keep tumbling away, keep fighting.

“Never, ever stop fighting,” the 36-year-old insisted. That’s how I’ve approached this weekend.

“It feels like a first because I don’t feel like I’ve had a win for a long time,” he concluded.

Hamilton’s issues were not done after the chequered flag was waved, as the race winner was summoned to the Stewards for violating the seat belt rules on his in-lap, when he loosened his seat belts to celebrate his victory. No drama there, however, as he was fined 5000 Euros, with another 20,000 Euros fine suspended through the end of 2022.

Valtteri Bottas, who delivered an impressive Sprint performance, denying Verstappen the top starting position in the Grand Prix, could not replicate the same form on Sunday, and was bullied by the Red Bull pair into Turn 1, but recovered to finish third making it a first and third for Mercedes.

“The start today was quite tricky, it was a disappointing first lap but I tried my best,” Bottas said in the Mercedes media brief.

“After that, the pace was good and from the cockpit, I thought we could have a chance of the one-stop, but we decided to do a two-stop.”

The Finn benefited from the virtual safety car that was deployed as the debris from Mick Schumacher’s Haas’ front wing were cleared from the track, which allowed him to take third from Sergio Perez.

“The team put me in a good place to take advantage of the VSC, and it fell my way for once, so I was happy with that,” the 10-time winner explained.

“Overall, I’m glad we could score more points than Red Bull today – it was a positive result.

“Congratulations to Lewis, he had an amazing drive,” Bottas concluded.

With his win in Brazil, Hamilton reduced the gap to Verstappen in the Dirvers’ Standings to 14 point with three racing remaining this season, as Mercedes lead Red Bull by 11 points. (Follow me on Twitter @MallakJad)