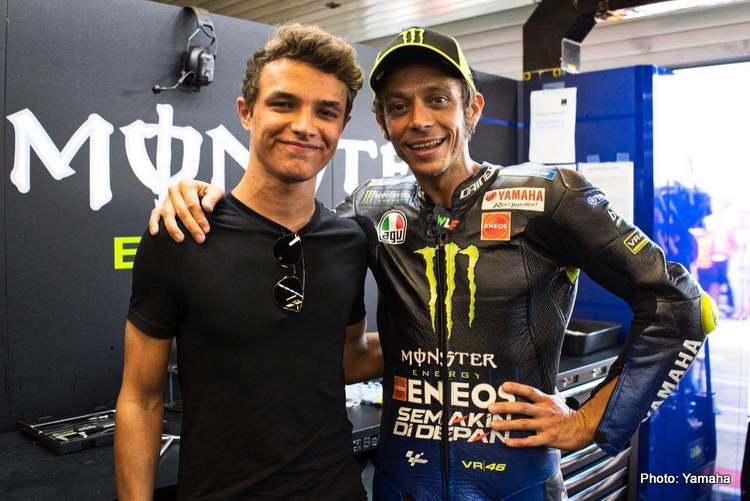 McLaren F1 driver Lando Norris paid tribute to his boyhood idol, Valentino Rossi, and revealed they had exchanged text messages ahead of the Italian rider’s great’s final MotoGP this weekend.

Norris, 21, wore a Rossi tribute helmet at the 2019 Italian Grand Prix and the two have kept in touch since they met at Silverstone that year.

“He sent me a message last night, just because he is going into the final race of his career,” the British Formula 1 driver told reporters ahead of the Sao Paulo Grand Prix at Brazil’s Interlagos circuit.

“It’s sad times. I’m going to miss him. He was the guy I watched when I was four, five, six years old. He got me into racing, got me onto a motorbike first,” Norris added.

“He’s been the guy that I’ve looked up to, the guy who’s kind of helped me get to this position where I am because probably without watching him, my ambition of being a racing driver wouldn’t have been so high.”

Norris would not divulge the details of Rossi’s text and said it was in response to a “little heartfelt message” he sent saying how much he would miss him and congratulating him on what he had achieved.

Norris said he and Rossi talked “now and then” and still had plans to do some car racing together, mentioning GT sportscar events such as 12-hour races in Abu Dhabi and Dubai or even online.

“It’s not just motorbikes that he likes. He loves car racing as well…If he can spend a bit more time to come to an F1 race, that is the plan for something we want to try and do together,” added Norris.

Seven-times F1 world champion Lewis Hamilton, who swapped machinery with Rossi for fun at an event in Valencia in 2019, also paid tribute to the Italian: “It’s obviously sad to see Vale stopping but I think his drive, his approach, just everything he’s done has been incredible.

Hamilton: Vale is just such a legend, one of the greatest

“The passion that he’s had for so long has shown through. And just such a legend, one of the greatest to ever do it,” declared Hamilton.

The 41-year-old Italian will make his 432nd Grand Prix start this weekend having amassed a record 89 wins and 199 podium finishes in MotoGP.

“I think that the most positive thing in my career is that a lot of people started to follow MotoGP to follow my career from the beginning, and the sport became bigger, more famous in Italy but also all around the world,” Rossi told reporters on Thursday.

“It’s good to understand that during my career I became something different, something like an icon and this is a great, great pleasure also if for a rider it’s more important what happens on track, the result, everything.”

He moved to the premier class a year later and won seven titles between 2001 and 2009.

“I always imagined this presser… this is a strange feeling. I want to keep it normal but that’s not possible. Great emotion right now,” said Rossi, who took part in a special ceremony during which all his championship-winning bikes were presented before the media.

The Petronas Yamaha rider said he was disappointed at being unable to add a 10th world title.

“I fought a lot for the 10th championship… I was able to race at a good level. My last title in 2009 was a lifetime ago. I would have been happy to win another championship but I cannot complain. I had a great career,” added Rossi.

Rossi has had a difficult final season, collecting only 38 points and achieving no podium finishes. Yamaha’s Fabio Quartararo sealed the title. (Reporting by Alan Baldwin)