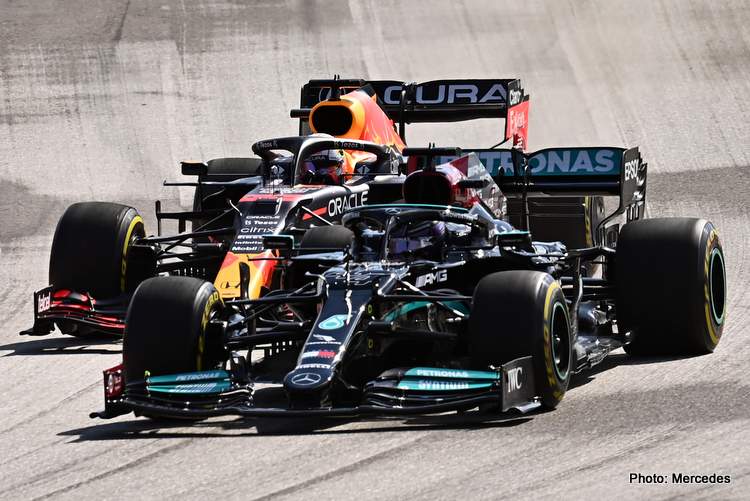 Lewis Hamilton got it right from the start, blitzing off the line from second on the grid to take the lead of the United States Grand Prix from Turn 1, what transpired thereafter was an engrossing contest which Max Verstappen eventually won, but only just.

It was a race of cat and mouse from the moment Hamilton pinched the lead, as the title contenders eked everything out of their cars in a manner their wingmen could not match. It’s really a battle between the two top team’s number one drivers, Lewis and Max, right now the two best drivers on the planet.

Having surrendered the high-ground, Verstappen remained calm and easily kept Hamilton in his sights, but to break the stalemate it took a ballsy strategy call from Red Bull to pit early and take the lead with an impressive undercut that regained them the lead and to an extent control of the race.

Indeed they pitted Sergio Perez earlier than might have been expected to force Mercedes to pit Hamilton. There was some smart fast thinking happening in the Red Bull garage.

It was a gamble at that point in the race. Hamilton stayed out several laps longer and with fresh rubber started to stalk the leader with the final two or three laps predicted to be decisive. They were, but not for the Mercedes driver who closed the gap to Verstappen ahead but turbulence and heat from the hunted Bull was too much despite the fresher tyres.

Verstappen on the other hand was masterful in his defence, getting the most out of older tyres to hold on for a great victory, among his best for sure. Those final two laps are worthy of a watch as he nursed the Red Bull to a one-second victory, a lap more and it might’ve been very different. The maths was spot on.

So much so that Mercedes team boss Toto Wolff was impressed and told reporters after the race: “I think it was some interesting strategy games and great racing. At the end, we thought we had a sniff at it but it wasn’t enough, the moment you get close to the other car it’s difficult.

“They went for a super aggressive first stop. That was bold, we did that in Bahrain. They then covered it in the second stint and we thought that was enough to get them but they deserved to win.”

It was a very important victory in the context of the title race, as Verstappen doubled his lead over Hamilton to 12 points, after 17 races and five remaining. Mercedes have not been in this chasing situation before.

Wolff continued: “The car just wasn’t quick enough on the mediums. I think we started really well on Friday, went a bit off track and recovered in the race, for us P2 is better than I expected.

“You could see the different strategies. One team that went for the undercut out of necessity, and a very, how can I say, courageous move, because it was very early. And the second time again to their advantage.

“Particularly in the last stint, you could see that [Verstappen] had learned from the second stint not to damage the tyres too early because he had something left at the end. We were just on the back foot because the car was not fast enough on the first stint on the medium.”

Wolff went on to explain that there were no better options: “We couldn’t possibly have gone for an early stop because based on the data that we had on the medium, it didn’t look like we could finish the race at that stage with an early stop. At a certain stage, you’re just too slow and you’re losing too much time.

“That was the situation in the second stop where we didn’t have Sergio’s pressure, but simply had to pit because he was going too slow. It’s always a balance of creating a tyre offset whilst not losing too much ground.”

As for Hamilton, Wolff was typically full of praise: “He brought the car in, remained calm even though he had 6.5 seconds and, on the second stop, 8.5 seconds to Max. He brought it in, increased the pace, and at a certain stage, there was just a massive difference, and that was brilliantly executed.

“Just not close enough at the end. When you follow a car, you start to suffer a bit, and I think if we would have had maybe two laps more, who knows? But it is what it is, and you need to congratulate Red Bull for their stops,” added Wolff.

Mercedes still lead the 2021 F1 constructors’ standings by 23 points but will leave Austin wounded, after all, it had been a happy hunting ground for them with six wins in eight previous visits, while Red Bull banked their first at the Texas venue one on Sunday.

What a race from our title contenders 👏👊