Rosberg: In terms of talent Hamilton is probably the GOAT 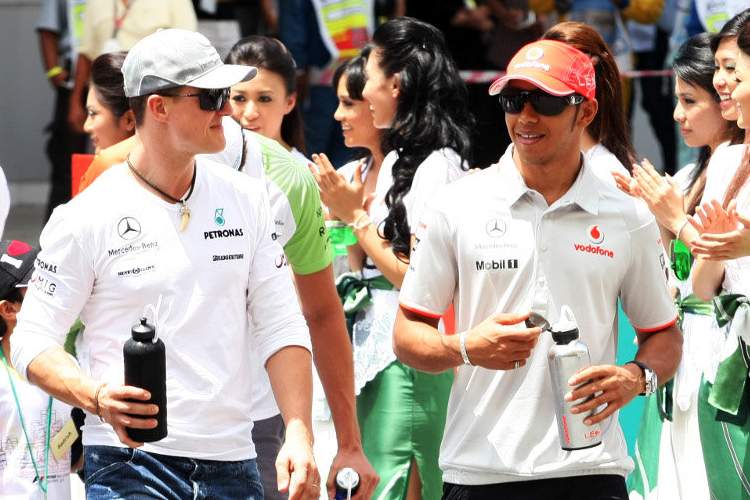 Few in the world of Formula 1 are more qualified to weigh in on the sport’s great GOAT debate than Nico Rosberg, teammate to two of the greatest, namely Michael Schumacher and Lewis Hamilton.

Rosberg was there when Mercedes made their F1 comeback in 2010 through the takeover of Brawn GP, aka Honda, aka BAR, aka Tyrrell, and with him, for an all-German driver pairing, was the great Michael Schumacher making a comeback to spearhead the Silver Arrows revival.

The pair remained teammates until Niki Lauda convinced Hamilton to join the team in 2013 alongside Rosberg, with Schumacher retiring for a final time.

Records show that during all their three years together Rosberg got the better of Schumacher, who was not the dominant driver of the great Ferrari era at the turn of the century but brought enormous status to the team in their own comeback.

With Hamilton, Rosberg only beat him once over the course of a season, in 2016, when he claimed the crown after a dramatic and controversial title race, which will always be remembered as a civil war between the two drivers, battling one another way ahead of the field.

Beating his pal turned nemesis to that title was enough for Rosberg, who had achieved his goal to win the crown as his father Keke Rosberg did in 1982. The next day, after a sparkling night at Yas Marina Circuit, Nico walked away from it all.

Now as a pundit, vlogger, enviro-entrepreneur etc, Rosberg was asked by Bild to rate Lewis and Schumi, starting with the latter: “Michael was just so complete as a driver, he had it covered in all areas and was incredibly fit. Just brilliant.

“He motivated the whole team and really got them behind him, knew all the names and invited people to his place for bike tours and so on,” recalled Rosberg.

As for Hamilton, who he grew up and was pals with him throughout the junior series when they raced together, through to their early days in F1, until they became teammates at Mercedes,  as it all soured and remains so to this day, half a decade later.

Rosberg continued: “Lewis is just extreme by nature. In terms of talent, he is probably the best of all time and he really builds on that, this instinct is phenomenal with him.

“A big difference between the two is hard work. Lewis hates testing and doesn’t like testing programs while Michael would test every day if he could, even though he was a seven-time F1 world champion because he knew that you can still learn a bit there.

“He was all about hard work, passion… There is definitely a big difference.”

Also, big factors in their respective arsenal were the mastery of mind games, the psychological side to the ‘teammate wars’ which Schumi and Lewis mastered in different ways.

Rosberg recalled an incident with Schumacher: “In Monaco, there was only one toilet in the garage. And Michael goes in ten minutes beforehand, locks himself in knowing us drivers have to go to the toilet again before qualifying. He then locked the door, I’m outside knocking, nobody answers, panicking I finally had to do it somewhere in the corner.”

As for Hamilton’s tricks, Rosberg recounted: “In qualifying I once had pole and there was a yellow flag on my lap. So he immediately rushes to the stewards after qualifying, even though I’m his teammate, but doesn’t say, hey, you have to look again at Nico, because he drove the thing under yellow. No.

“Instead he says: I’m only here to clarify whether I can do the same in qualifying next time and, of course, they promptly called me. I had to go up to the stewards just because he asked the question in a clever way.

“What he does very well is the whole political thing, with the media. He is very, very smart. And also on track, when you go into the gray areas with him, it’s somehow never really his fault. It’s always the opponent’s fault,” sais Rosberg.

As for his preferred teammate of the two, Nico replied: “Neither!”

The 2016 F1 World Champion then went on to recall: “It was difficult with Michael because I had not won a race at all. When Michael comes into the room it’s like a god walks in. In the first strategy meetings, his strategy was discussed with me and my strategy was also discussed with him, even though I was sitting next to him. With Lewis, it was just a fight, a fight on every level, and all the time.”

Hamilton (active) and Schumacher (retired) are tied on seven F1 titles each, however, it would be hard to bet against the Briton winning an eighth.

Asked about the prospect, Rosberg said: “Oh, I’m not so emotionally connected that I say, hey, Michael actually deserved to hold the record. Lewis deserves it too, and if he can achieve it, that’s good.

“I see more and more how really damn fast he is and I can be all the more proud that I beat him back then with the same car,” added Rosberg.