Wolff: Hamilton taking a new PU is a possibility 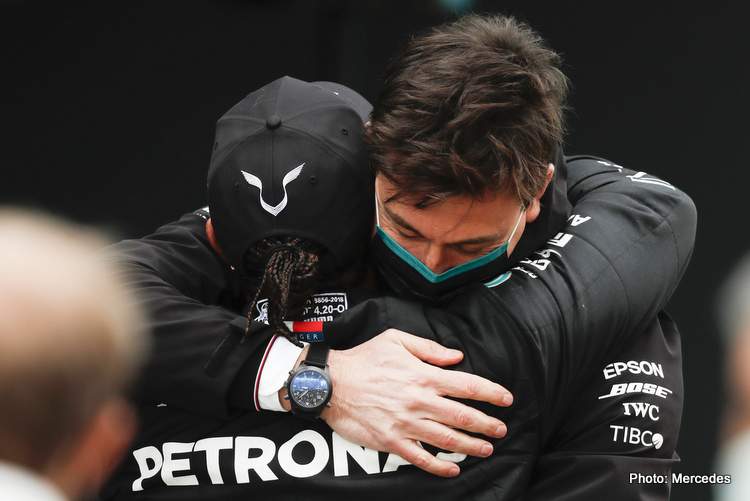 Mercedes are pondering giving Lewis Hamilton a fourth power unit at the upcoming 2021 Turkish Grand Prix and taking the consequent grid penalty, with their team boss Toto Wolff admitting it is a possibility.

With their closest contender Max Verstappen already gone through the pain of getting a new power unit during the weekend of the Russian Grand Prix, Mercedes and Hamilton are still waiting to decide the right moment to follow suit.

According to Wolff, who was speaking to Sky Sports, that right moment could be at this weekend’s race at Intercity Istanbul Park.

The Austrian was wary of the risk of not completing a race due to PU reliability, which in his opinion is the worst thing imaginable for his star driver’s title fight.

“Most important is that you don’t DNF because of a reliability issue,” admitted Wolff. “You can cope with swings, whether you finish second, third, I think that is OK, the championship is going to go long. But if you don’t finish…

“So we are looking at the parameters of the engines, making sure we don’t suffer from any reliability problems.”

The Mercedes team boss went on to preview Hamilton’s prospects in Turkey, he said: “Lewis has been tremendous there.

“But we have to take each race at a time. It’s so difficult, the cars are so close,” he cautioned. “I’m curious to see how this championship evolves.”

Hamilton on the other side feels that maximizing results from each race are crucial for the championship to evolve in his favor.

“It’s not only the two races, there’s been plenty of races where we’ve not maximised, as a team, collectively, both drivers and everyone but we’re still in a fight and we can continue to improve,” he said.

“There are definitely things that we will try and do better moving forwards but we just won’t give up, we’ll just keep trying, keep pushing, remain hopeful and just do the work.”

The seven-time champion is aware of the tough challenge he is facing, with the ever so tight margins between him and Verstappen, as well as both their teams.

“Well, undoubtedly it’s going to be tough,” added Hamilton. “I think, for two thirds of the season so far they’ve had the edge. However, it’s obviously been difficult with all sorts of things, curve balls sent to both of us and our teams.

“There’s still everything to play for in these next races. I think they’ve got a good set of circuits coming up and I anticipate or just continue to be really close between us. Just got to be hopeful of some good races,” he concluded.

Hamilton would have hoped for a worse result for Verstappen in Russia considering his engine penalty, but the Dutchman’s excellent second place there means that the Briton – despite winning in Sochi – goes into this race weekend in Turkey leading the drivers’ standings by only 2 points.