Norris: The heartbreak has eased 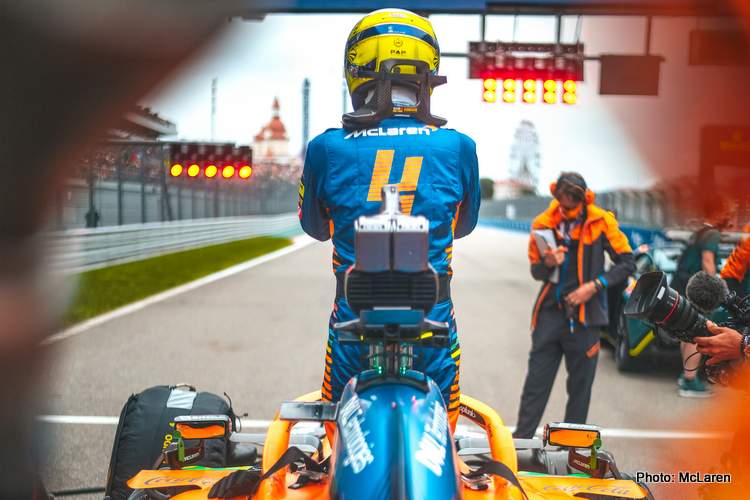 Heartbreak is an understatement when describing what Lando Norris must have felt after seeing his chances of a maiden Formula 1 victory washed out by the Russian rain in Sochi.

Getting in the car and going racing again is most probably the best pain killer for an F1 driver’s anguish. But in Norris’ case, the two-week break between the Russian Grand Prix weekend and Turkey should treat him well as he licks his wounds and gets ready for another round of F1 action.

The highly-rated British driver has unfortunately experienced the feeling of going from hero to zero in the span of a few minutes, at an early stage of in his tender F1 career. No matter how prepared he might have been for the ruthlessness of this sport, the pain would have been intolerable nevertheless, especially when he had one hand on the first place trophy at Sochi.

Without going into the details of what happened on that gloomy Russian afternoon, and without dwelling on who to blame for the result, the fact remains that young Lando has gone through an experience that could be destructive, or character building and educational, and odds are it leans towards the latter considering the support and love McLaren show for their star.

Speaking to F1.com during the event of launching his “LN Racing Kart” in Italy (another very smart way to move on from Sochi to be honest), Norris seemed to be on the right path back to a healthy state of mind.

Say hello to the @LNRacingKart! This is a project I’ve been working on with OTK for the last year and I’m super-proud to say it’s now here. pic.twitter.com/9gLXuqJkVX

“It has [eased],” said Norris. “I had Monday off to get over it myself and then was already in McLaren on Tuesday and spent a lot of time with my engineers, our whole group, going through everything with a bit more clarity the decisions we made. I’m better now and ready for the next challenge.”

“It’s not just something people say, it definitely is true [that tough experiences make you stronger],” he reflected. “You do learn probably more from the hard moments. You always learn things. Even if you win a race, you can learn things.

“Definitely when you have to make these split-second decisions, when it’s not an easy decision, and you need so many different factors involved, there is a lot of things you can learn.

“I feel like I have a long career in F1, it’s nice in a way to get it out early, so that when these things arise in the future, or in my future years in F1, I’ll be able to react better,” Norris insisted, confident of his bright F1 future.

Support to Norris has been pouring left, right, and center from the F1 community and outside of it as well.

“I got quite a few messages and not necessarily from drivers,” he declared. “Obviously everyone within McLaren and a lot of people even from different sports. It was more of a time when people see it as an emotion-attached sport, rather than cars driving round in circles, as lot of people like to say.

“So I guess they saw the feelings we have as drivers, the passion we have for the sport, the desire to win. You want to do the best job you can for the team.

“I got a lot of messages from a lot of people which in some ways help. There were a lot of ‘Your time will come!’ But no matter what, they definitely helped,” concluded Norris, grateful to all the support he received.

With seven races to go this season, Norris lies fourth is the drivers’ standings trailing Mercedes’ Valtteri Bottas by 12 points only and ahead of Red Bull’s Sergio Perez by 19 points, which is impressive considering the deficit in car performance he has against these two. He has been consistently brilliant this year overshadowing his highly-rated teammate Daniel Ricciardo.