Seidl: Together we made this call to stay out 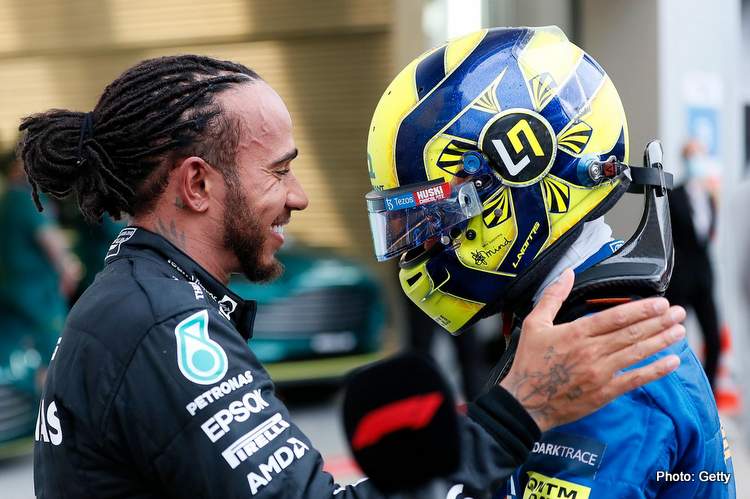 Lando Norris did everything right to win Sunday’s Russian Grand Prix, except when the rain came down, he opted to stay out with his slick-shod McLaren when rain came down hard.

As a result, what would have been a fine first Formula 1 victory for the precocious youngster turned into a disappointing seventh place. Even race winner Lewis Hamilton was impressed!

The 21-year-old Englishman fended off a concerted attack from his 36-year-old fellow countryman, the kid had the race at Sochi Autodrom under control… until he didn’t.

Immediately after the race, team principal Andreas Seidl was the first to sympathise with his driver and told Sky F1: “I saw Lando quickly after he jumped out of the car just to say thanks for everything he’s pulled off this weekend. He’s very disappointed at the moment but that’s part of the sport we’re in.

“In hindsight, it’s always easy to judge what we could’ve done differently. We didn’t get it together as a team in hindsight, it was the wrong decision to stay out, but it’s part of the sport.

“He’s long enough in this sport now to know it’s part of the game, part of the learning. But not just on his side, but on the team side as well because I think there is always a chance to overrule him from the pit wall side with the information we are having. In the end, together we made this call to stay out,” admitted Seidl.

“On Lewis’ side we heard the discussions as well, it was pretty much the same ongoing and on Lewis’ side he had the chance to wait to see what we are doing and do the opposite because he was in P2. We didn’t have this opportunity. We wanted to go for the win, that’s why we decided together to stay out and it just didn’t work out,” lamented Seidl.

For his part, Norris accepted the blame, took the knock on the chin but did say: “Had it stayed the same amount we had the right decision, but it obviously got a lot wetter than we as a team expected. When it’s only two laps to go, when there are 20 to go you’re maybe not as aggressive with decisions.”

This suggests Norris made the call to stay out thinking the rain would remain a drizzle but a call to box, when it really got heavy, should have come from the team with no argument from Norris who simply did not have the weather forecasting tools available to him as they did in the pit garage.

In their defence, McLaren by virtue of Lando leading, had to make the first call for a change to inters with Hamilton ready to react, either way, thus when the leader erroneously opted for another lap, Mercedes had it in the bag by pitting their driver at the right time and thus bagging the win for Lewis.

Nevertheless, Seidl is impressed with his young charge: “Apart from the last two or three laps, from what we have seen from the team and his side yesterday when he pulled off the pole and also today in the race, it’s impressive what he’s pulling off in only his third year in Formula 1.

“That’s why of course we need to analyse together with him what we could’ve done better today, learn from it and then it’s also important to see all the positives and come back stronger in Turkey,” acknowledged the Sedil, vaguely hinting that they were not on their A-game when making the call.

Nevertheless, it is refreshing to see Norris backing his team and vice versa, as McLaren are showing that they are back, perhaps not at the very sharp end, but rather way ahead of where they were not long ago. They have certainly closed the gap relative to Mercedes and Red Bull as Monza, where Daniel Ricciardo headed home Norris for a famous one-two for the Woking outfit.

Unfortunately, there was no love from Russia, for Norris.

Seidl added: “We finish P7 so we regret it at the moment. It’s a decision you make together, the driver and the pit wall. The result is we didn’t get it together today compared to some other teams. We shall analyse it, learn from it and try and do better next time.”

Norris remains fourth in the 2021 F1 drivers’ standings, while McLaren are third in the constructors’ race 17.5 points ahead of Ferrari, up from 13.5 before the race in Russia.

Final word, on Norris, to Hamilton: “Lando did such an amazing job. He had incredible pace. He’s doing such a great job for McLaren. It was very bittersweet obviously to see my old team ahead. They are doing so well. They obviously won the last race. They are doing fantastic and obviously powered by Mercedes.