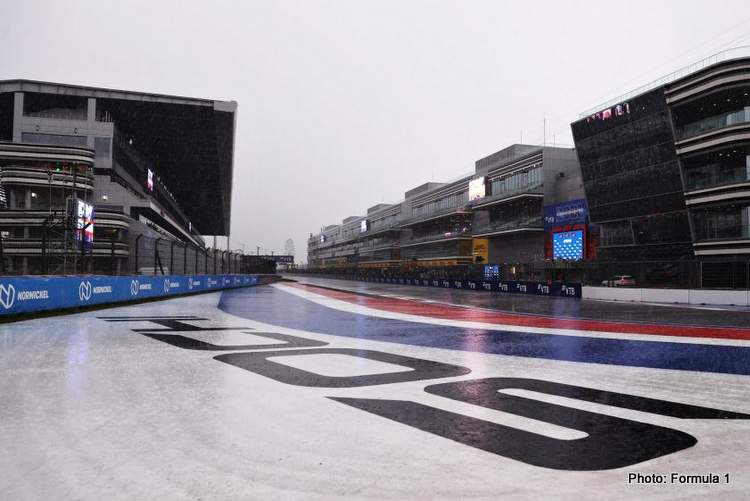 With heavy rain and thunderstorms hitting the 2021 Russian Grand Prix venue at Sochi on Saturday morning, FIA racing director Michael Masi weighed in on their modus operandi for the rest of the weekend.

The lighting bolts illuminating the skies of Sochi and heavy rains hitting the venue, have put all the F1 proceedings in jeopardy. with FIA racing director Michael Masi sharing his though process.

“As we can see already this morning, the weather’s gone up and down like a yoyo, and the intensity of the rain has been increasing, with some thunder also joining us,” said Masi.

“But effectively the procedure per today will be that we will aim to start all sessions, get everything ready from an operational perspective, and then judge the conditions at the time.

“What we’re seeing from the forecast side is that we will have… rain until about 1330-1430 local time, and then it decreasing in the afternoon,” said the race director sharing the data at his disposal.

“The priority from today’s perspective is obviously Formula 1 qualifying this afternoon,” he added.

“So Formula 1 will take priority, then we were fortunate in restructuring the programme to have the first Formula 3 race yesterday, pre-empting the weather that was going to happen this morning, which based on what we saw when we came out to the circuit this morning was absolutely the right decision; it was torrential at the time we would have been having the F3 race. So we did that, and now we’ll just sort of look at the day ahead and just take it step by step.”

As for how to deal with the possibility of cancelling FP3, Masi explained: “We would have a couple of options, as we’ve seen before, so we could start the session and red flag it immediately and let the clock run down and let’s judge what the weather’s like at that time.

“Alternatively, if we can see that it’s just going to be torrential for the entire session, we would just abandon FP3 and aim for qualifying.”

With qualifying being also in doubt, Masi said the decision would be based on the light factor.

“The determining factor this afternoon [for qualifying] will be the light. Sunset locally is about 1815… but with weather conditions like this, obviously light diminishes far earlier, so that will ultimately be our cut-off point.

“If qualifying isn’t able to happen today, as we’ve seen a few times before in the past, then we will re-do a programme and hold qualifying on Sunday morning.”

It remains to be seen how the FIA handle this situation this time around specially that, similar conditions have been encountered in Spa this season, where we ended up watching “no race – race” with half points awarded based on qualifying results.

Formula 1 was due to run its usual Saturday schedule in Sochi, with FP3 taking place at 1200 local time followed by qualifying at 1500 local time. Formula 2’s first sprint race was postponed.