Villeneuve: It bothers me that driver mistakes are punished 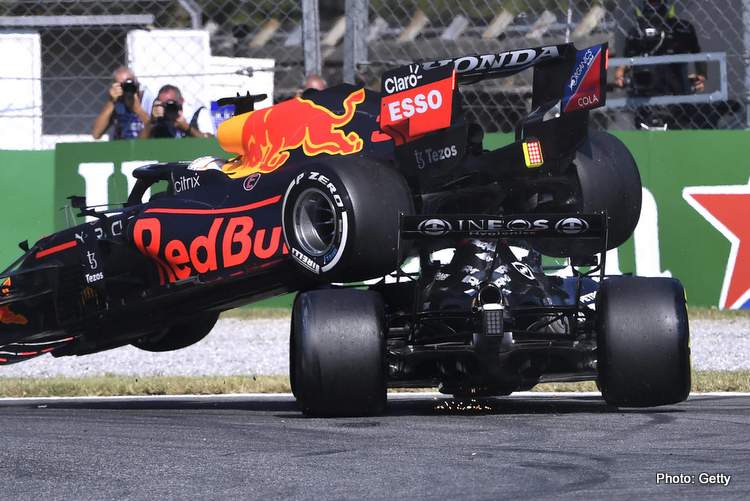 Straight-shooting Jacques Villeneuve has his say in the aftermath of the Hamilton-Verstappen crash during the 2021 Italian Grand Prix, the 1997 Formula 1 World Champion providing his insight into a title battle that just got nastier.

The now-famous collision – two cars beached in the Monza sandpit, a Red Bull atop a Mercedes – is forever etched in F1’s fabulous history of conflict, triggering another great divide between F1 fans, media, pundits even housewives debating who gets the blame.

No stranger to hard-fought battles, Villeneuve was tapped up by Corriere for his say on that moment of madness at the Temple of Speed on Sunday.

“No, at Monza they were both culpable,” ventured the Canadian. “Max was too aggressive, he could have cut the chicane but then he would have had to give up that position later. Lewis could have left ten centimetres more but he wanted to stay ahead. It seemed to be a process of intentions, you cannot punish someone ‘thinking’ that he did it on purpose when the contact starts meters before the manoeuvre becomes intentional.”

After the race, F1 world champion Damon Hill kicked a hornet’s nest when suggesting Verstappen had acted with intent to disrupt/end the race because it meant he stayed ahead in the championship.

Villeneuve disagrees with his former Williams teammate: “No. They gave him the penalty because the Red Bull wheel ended up over Hamilton’s head. They said before that one should not judge on the basis of the consequences, but they did it.”

Comparing the Hamilton move on Verstappen at Silverstone in July, Villeneuve explained: “That too was not a calculated move. It was a mistake, and it bothers me that mistakes are punished. There is no space for these two. Lewis doesn’t usually make these mistakes, it only happens to him with Max.

“Verstappen is always very aggressive, with Hamilton he is even more aggressive. If you put them together in the same corner it worsens, but these are the moments that make F1 what it is. If every time a penalty is triggered it will be a non-contest because none of them will try to overtake.”

Having battled the likes of Michael Schumacher, Villeneuve knows a thing or two about conflict on track. Asked from a driver’s perspective if the one who lifts off the gas first is showing a sign of weakness, he answered: “Partially yes. But what matters more is the fact that both are fighting for the World Championship and none of them wants to be behind the other.”

He added that in this battle “Verstappen is superior, he has made no real mistakes. He is always on the attack. Lewis has shown weaknesses. And Mercedes too, more than Red Bull.

“After Rosberg, Lewis had an easy life. Maybe he fell asleep a bit, this year he woke up suddenly but he remains a phenomenon,” insisted Villeneuve.

Reflecting on his decade in the top flight, from 1996 to 2006, and how battles were fought then, Jacques recalled: “There were no such penalties. But it was different, we passed on the inside. Now they block on the straight, they move around on the brakes, they are forced to take extreme risks to pass and invariably they make mistakes. So it is difficult to establish the culprits, at Monza too it was not clear who was to blame.”

Villeneuve famously clashed with Schumacher on several occasions. Things got ugly as the great Ferrari driver was arguably the most ruthless of them all in wheel-to-wheel combat situations, taking the baton from fellow great Ayrton Senna, who himself was not shy to push the rules of engagement.

“Michael was one of the first to employ this type of misconduct, then many followed his example. Now everyone is doing it and it is becoming very dangerous,” lamented the 11-time Grand Prix winner.

Should Lewis and Max calm down?

“No way. It’s a fight, they’re gladiators and they’re not too aggressive, they just want to beat one another on track. They don’t back off but we’ve still not seen some of the bad things we saw in the past. The Senna-Prost rivalry went far beyond the limit, there was hatred and the will to play dirty.

“Between Lewis and Max, no. I don’t see this. I just hope we see more battles that don’t end up in the wall,” Villeneuve added.

On Sunday at Monza, F1 breathed a collective sigh of relief when both drivers walked away from their cars. Luckily, the collision was at one of the lowest speed sections of the track and, most of all, the halo saved Lewis from being crushed.

Villeneuve concluded: “Speed ​​has nothing to do with it, there is always danger in racing.”