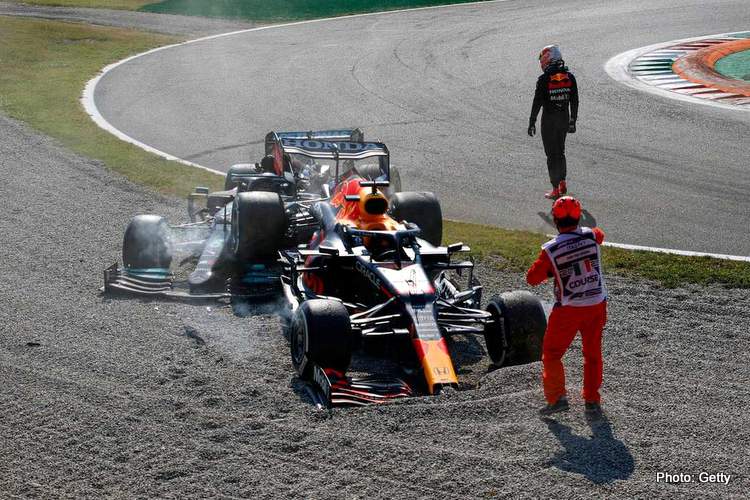 There is no point in me analyzing Sunday’s accident during the 2021 Italian Grand Prix at Monza between Max Verstappen and Lewis Hamilton on Sunday, because I know nothing about driving a Formula 1 car.

However. the behaviour and comments of Hamilton, and Mercedes boss  Toto Wolff, and many members of the boringly predictable biased British media are certainly worth lambasting.

Complaining that Verstappen didn’t bother to check if he was OK after the incident is blatantly disingenuous of Hamilton, given that he was on the throttle spraying gravel out the back of his car, as Verstappen walked away from the scene

To viewers, it was obvious that Lewis’ only concern was his own need to get back into the race, spinning his rear wheels, and jerking Verstappen’s precariously balanced car around before Max had even had a chance to release his six-point harness, let alone get out and away from the desperate Mercedes driver.

Wouldn’t you just high tail it out of there as well, as opposed to approaching the desperate stone shooting Merc with the Red Bull balanced on top of him potentially about to drop off at any moment?

I would have walked away as well.

After Silverstone, why should Lewis expect Max to be concerned for his well being when he obviously had none whatsoever for Max anyway?

Moreover, it is unbelievable and even irresponsible in the post-incident aftermath, that neither the FIA nor the elements of the British media, that were so full of praise for the miracle of the halo that potentially saved the life of their fellow countryman, to have not made mention of Hamilton’s antics in the direct moments after the incident, completely devoid of any duty of care towards Verstappen at all.

The whole false narrative continued after the Stewards’ hearing where Max received his three-race grid penalty for the next race along with two penalty points on his licence, while Hamilton spoke of his pride in the officials by saying, “I think it’s important for us moving forwards for the safety of the drivers that there are strict rules set in place.”

Safety? How does he sleep at night?

Finally, to bring Hamilton’s post-Monza parody to its current conclusion, his neck is apparently so sore now that he feels he will need to see a specialist before the next race in Russia.

Yes, Lewis was so sore that the very next day his priority was to be in New York City for the 2021 Met Gala and parade his fashion line with his model friends. Not too painful for that, one assumes.

After the infamous coming together of the two drivers, at the recent British Grand Prix, Red Bull bosses were critical of Hamilton’s tactics, using words such as ‘amateur’ and ‘desperate’ to which Toto Wolff objected to, indicating that it was a concerted effort to discredit the good name and sporting integrity of his driver and that words such as ‘amateur’ have no place in the sport.

And yet, for Wolff, there’s obviously a place in the sport to intimate that Max somehow deliberately took Lewis out by saying it was a ‘tactical foul’ on Max’s behalf.

Isn’t that discrediting Max? Is that not borderline defamation?

Then, of course, there’s good old Damon Hill, perhaps trying to stay relevant in an era of F1 rapidly passing him by, suggesting in a worldwide broadcast that Max might have pre-calculated the outcome of the incident.