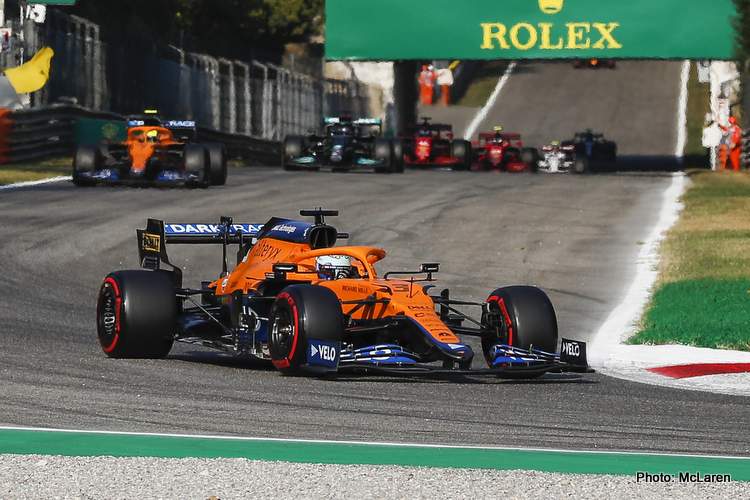 From a technical perspective, the sport’s annual trip to Monza in wonderful Milan was a bonanza, and this year’s 2021 Italian Grand Prix did not disappoint.

The Autodromo Nazionale di Monza is a boomer, not just steeped in history, but also a high speed and deceivingly technical circuit where optimal performance in Formula 1 is dependent on power, drag, braking bite, and mechanical grip.

Master those aspects over your competition, and you’re on your way to the podium, which by the way is the best rostrum on the F1 calendar by far.

It was no surprise then that McLaren came out trumps this weekend and the combination of their industry-renowned aero package, Mercedes power unit, a vastly improved power-down capability, and an ultra-low drag Monza specific wing configuration gave Daniel Ricciardo and Lando Norris every opportunity to shine.

Shine they did, but we shouldn’t overlook a major factor that contributed to the MCL35M’s suitability to Monza, and it is the same factor that has held Ricciardo back in his first year at McLaren, until this weekend, when he finally outperformed his teammate comprehensively for the first time; brakes.

Yes, of course Ricciardo returned from the summer break refreshed and ready to meet the challenge of understanding his new team’s chassis, but it was Norris’ radio message to his engineer on his first timed lap in FP1 on Friday mentioning that he didn’t like the feedback of his brake pedal that was telling of the real reason for Ricciardo’s sudden change of fortune; a change of friction material. Whilst Norris steadily recovered much of the performance deficit to his teammate throughout the course of the rest of the weekend, Ricciardo’s regained confidence on the McLaren’s brake pedal essentially made it a fait accompli.

As usual, we saw the shallow chorded rear wings and low drag setups on all the front running teams, but Red Bull and McLaren’s ability to provide low-speed axle rotation, and power delivery out of low-speed corners through superior mechanical suspension packages seemed to be a performance differentiator at Monza.

Curiously, as rightly pointed out by Martin Brundle during the telecast, both Mercedes were suffering from the need to harvest or clip at the end of the high-speed straights, which wasn’t the case with other Mercedes powered chassis, such as the McLarens, more than likely indicating that Mercedes were carrying more drag throughout the weekend, for whatever reason, and probably contributing to both Hamilton, and Bottas struggling to overtake at times, even with DRS activated.

A technical analysis of a Grand Prix at Monza can’t neglect the home team, and indeed the Ferrari power unit has an output deficit in comparison to their competition, but team principal Mattia Binotto indicated on the weekend that an increase of more than 20bhp is expected possibly as early as Turkey this year as their upgraded PU with new hybrid technology is pending homologation by the FIA.

Nonetheless, with a recently upgraded floor and barge boards, the Scuderia have noticeably cured their previous aggressive tyre degradation characteristics with a more stable aerodynamic balance, even though Carlos Sainz gave his crew another rapid repair response workout with his FP2 pre-sprint accident at Ascari.

Other points of interest arising from the 2021 Italian Grand Prix were,

Finally, and probably most importantly of all – on the sidelines of the Italian Grand Prix weekend – F1 made great strides towards a new PU future at Monza when the PU suppliers met, and Daimler CEO Ola Kallenius was forced to concede that Mercedes’ unwillingness to abandon the use of the highly complex and expensive MGU-H element, was the primary obstacle to a general consensus and a path forward in developing a post-2025 architectural strategy, and the VW Group committing to becoming an F1 PU supplier.