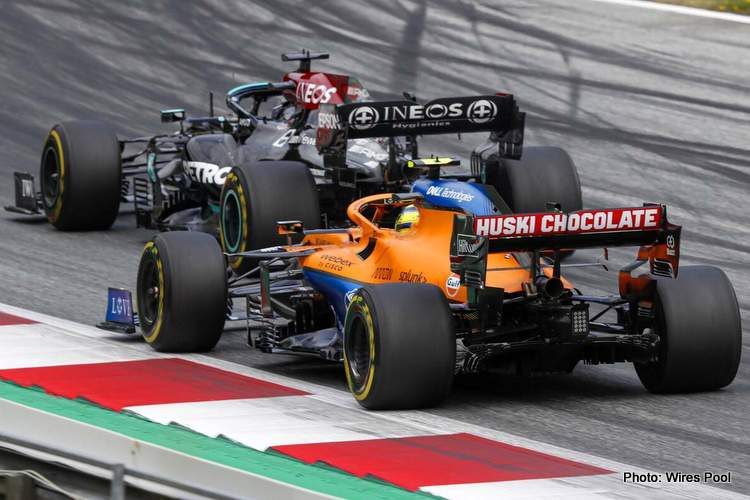 Lando Norris is not used to racing in close quarters with the Mercedes but said he noticed some mistakes from Lewis Hamilton during Sunday’s Austrian Grand Prix.

Norris put in a brilliant qualifying lap to start second, ahead of both Mercedes, and was able to fight with Hamilton for much of the opening stint.

The reigning champion did pass Norris, while Valtteri Bottas passed him in the pit phase thanks to the penalty the 21-year-old picked up early on.

Hamilton fell behind both Bottas and Norris later in the race after picking up damage on course to a fourth place finish, and was heard over team radio earlier in the race saying “Lando, such a great driver”.

Asked about Hamilton’s comments, Norris said that he appreciated the compliment, but was more focused on “going head-to-head” with the Mercedes.

“Like, as much as I appreciate the kind words it’s not like he was driving perfectly,” he said. “There were still times he ran wide out of Turn 1 or made a mistake in Turn 3.

“It’s not like they’re not raceable; you kind of get there and when you have the car to perform and do well, you realise you have a chance against them. It’s hard to ever say that until you’re actually racing against them and your car’s there and you’re going head-to-head.

“Normally, they’re way too far ahead of me so. It was cool, it’s a good feeling to race against not just Lewis but Valtteri as well and Max and Sergio, to be in that pack and say we’re fighting for a podium because our pace is just that good, was a really good feeling.”