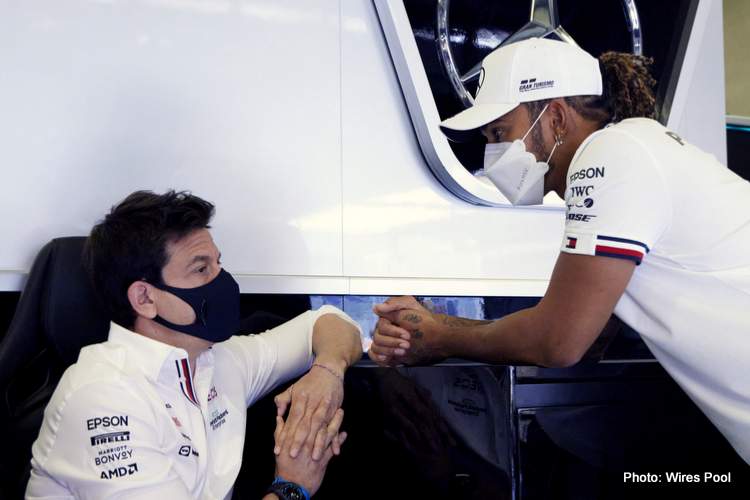 It began after free practice, on Friday, and continued beyond the finish of the 2021 Austrian Grand Prix, Mercedes anti-Red Bull rhetoric was firing on all cylinders after Max Verstappen’s dominant victory on Sunday.

Lewis Hamilton and Toto Wolff continued voicing their suspicions and planting seeds of doubt about the technical legalities of the RB16B, this time not only maintaining the line that Honda power unit has somehow increased in power, but that Red Bull are using special qualifying “party” modes, which were banned by the FIA in 2020.

Lewis Hamilton said of his rivals, “They have definitely got some extra in their bag. They’ve also basically got the qualifying mode that we used to have. I asked my guys… I don’t understand where they get it from.”

“I think they are still gaining to us on the straight-line which is a bit of a weakness for us, and we will see in qualifying when turn up the engines how it is really going to be.”

Wolff continued the negative storyline, not only casting doubt on the Honda PU, but continuing the narrative that the 2021 regulations were directly targeted to disadvantage Mercedes saying, “I expect more engine to come from these guys tomorrow.

“With these new regulations where they cut off big chunks of the floor, it’s very difficult,” explained Wolff

Wolff played down Mercedes ability to claw back any aerodynamic advantage that Red Bull might have by saying, “The wind tunnel doesn’t work anymore on this year’s car. Normally, our car should be functioning better.”

Whilst the negative picture continues to be painted by Wolff and Hamilton, the F1Insights AWS data and the Sky F1 video wall tells a vastly different tale.

Once again, even though Red Bull are carrying a shallower rear wing, they are still, like last week, carrying more speed across corner apices, which can only be a result of better aerodynamic and mechanical grip.

Ironically though, it was not only Red Bull that was faster on the straights at Speilberg, but rather Mercedes PU customers – McLaren – who were able to also carry less drag, making it extremely difficult for Hamilton to pass Norris during the race.

Even though the reality of Red Bull’s surge in performance points to something completely different, the rhetoric from the defending World Champions continues.

When will Mercedes simply accept that, so far this year, Red Bull have done a better job than they have and just crack on with trying to beat them?