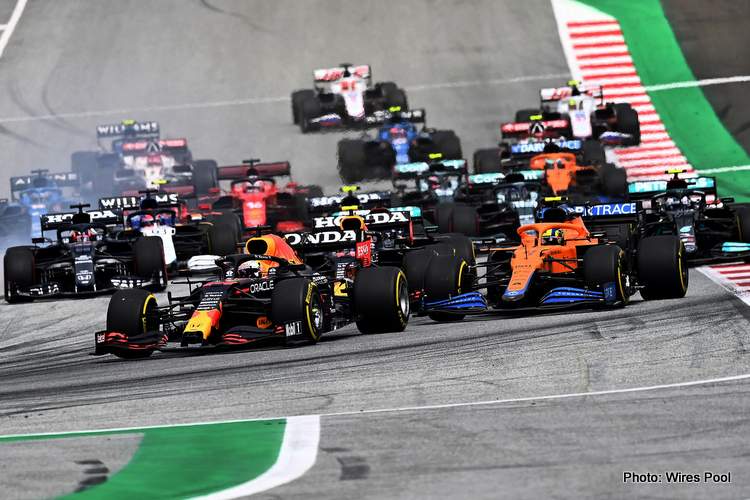 As expected, Max Verstappen was untouchable on his way to victory in the 2021 Austrian Grand Prix, in front a sea of orange “Max We Are Back” t-shirts worn by his army of fans at Red Bull Ring.

The Red Bull driver headed home, Mercedes driver Valtteri Bottas in second and McLaren’s Lando Norris claiming third, after Lewis Hamilton lost out on second when he damaged his car while in second place. The defending World Champion was fourth.

The signals were there from the moment engines fired up on Friday, this race trophy – like last week’s – had the Dutchman’s etched on it.

On the day, Verstappen led from the first start; again after a restart to remove Esteban Ocon’s stricken Alpine, early on, and then powered into the distance setting fastest laps on just about every lap. The Dutchman in his finest form.

So large was his lead on lap 61, he had a pitstop in hand which he made to bolt on a fresh set of tyres, a cut in the second set he was running prompting the team to take action. He returned to the track to stretch a ten-second lead to 16 or so by the end.

Clearly chuffed Verstappen said after his 15th Grand Prix victory: “I feel incredible to be honest. The car was unreal. On every tyre set we put on it was really enjoyable to drive. It’s insane – I’m a bit amazed myself how today went. I didn’t expect it to be like this. Incredible job by everyone to deliver something like this.

“When you go into the weekend everyone sees you as the favourite but it’s never easy to always deliver what we did today, so a great effort by the whole team. The whole package over these two weeks here has been incredible. I just had to be awake at the start. I knew if I could go fast on lap one I could do my own race. Insane to see all the fans here. So much orange is incredible. A great motivation” added the Dutch ace.

The undisputed master of the Red Bull Ring 👌

What may have been a Red Bull one-two came to nought early on as Sergio Perez was too bold attacking Lando Norris’ McLaren around Turn 4, a move that was high risk at any time, and he paid the price.

The Red Bull got its wheels on the beach and tumbled down the order. Norris got a five-second penalty for the forcing incident, a tough call, which came back to haunt the Mexican later in the race.

Perez should have been second for Red Bull, the move on Norris in Turn 4 is seldom, if ever, on as the outside line has little grip and always induces understeer.

Ironically, the Mexican received a penalty (one of two) for a similar infraction later in the race when he forced Charles Leclerc onto the dirt.

Meanwhile, Norris took it on the chin, simply knuckled down, soldiered on to take a very popular and seriously deserved third place. Bottas was only two seconds ahead at the end…

If ever there was a deserving Driver of the Day, Norris was the man. On the other hand, Perez should have known better, with such a good car in his hands he could have waited.

Norris said of his fourth Grand Prix podium: “It was fun, it was a good race, it was exciting… but I’m disappointed because we should have been second place. I thought on Lap One [after the Safety Car] was just racing really, [Perez] tried to go around the outside which is a bit stupid, and he ran off the track himself, I didn’t even push him.

“I’m frustrated but also happy with P3, we had very good pace. It’s nice to know we can actually race them. That was probably the first race in many years where we were actually racing a Mercedes and a Red Bull. Hopefully we can keep it up,” added Norris.

Early on this played nicely into Mercedes’s hands with Hamilton and Bottas promoted to second and third as a result. But on lap 47 Hamilton damaged his Merc riding the kerbs on the exit of T1. It cost hm lap time and allowed Bottas to close in rapidly.

At first, the number two was told to hold station but the #44 Mercedes had lost pace, and the Finn was released a little later which allowed him to take second place.

Bottas said after the race: “For me personally, one place better than last week and I started from fifth. I think as a team we got some decent points considering the gap we have to red bull in terms of pure pace.

“For me it is nice to be on the podium in second place. I think it’s really maximised what we could get today. The [hard tyre] held on pretty well. They started to drop towards the end but also with Lando and I have to say surprisingly McLaren was really quick today putting on some pressure.

“Two weeks to Silverstone we have some work to do but right now I am keen to have some champagne,” added the Mercedes driver.

Hamilton nursed his car home to take fourth. His battles with Norris on the day left the older driver with added respect for his younger countryman. Saying on the radio: “Such a good driver, Lando.”

After the race, the defending World Champion sent a clear message to his team: “We are miles away from them. We need all hands on deck. They have brought a lot of upgrades over the last few races and we haven’t brought any…”

Next best was Carlos Sainz who is proving to be a safe pair of hands for Ferrari, the Spaniard went against the norm to start the race on the harder Pirelli tyres. He persevered through the first stint and then, with softer fresh rubber, he simply gobbled his way through the field to turn 1oth on the grid to fifth at the end of the 71-lap race. A strong afternoon for him.

In contrast, Charles Leclerc, more feisty than his teammate, is also more incident prone. His decision making in wheel-to-wheel combat is becoming suspect as for two weekend’s in a row the Monaco Kid has been wayward. Today he finished eighth.

Daniel Ricciardo, thoroughly outshone by his young McLaren teammate this weekend, nevertheless did well to limit the damage of starting 13th to finish seventh, the Australian delivering the kind of race we are used to from him, with a ballsy move or two to remind all not to write him off just yet. A result he needed.

For AlphaTauri, sixth and seventh on the grid flattered to deceive. Pierre Gasly two-stopped his way to ninth. Yuki Tsunoda had a forgettable race, two penalties for crossing the pit entry line, twice (!!!) saw him drop down the order to finish 12th.

Alpine driver Fernando Alonso claimed the final point for tenth place, making up for the disappointment of Esteban Ocon’s lap one DNF. His Alpine breaking after being sandwiched on the exit of the elbow-angled Remus bend.

Spare a thought for George Russell who was stellar in qualifying on Saturday, forced to go backwards with a car that is simply back of the grid kit. Thus eighth on the grid became 11th by the end of the day. Disappointing as a chance for his first points went begging.

Finally and for the record, Alfa Romeo veteran journeyman Kimi Raikkonen was involved in another bizarre crash (remember Bahrain?) this time, on the final lap when fighting with Aston Martin’s Sebastian Vettel fighting for 11th place.

Raikkonen, overtaken by Vettel, turned into his former teammate forcing them both into the kitty litter where their respective races ended. A strange lapse from the sports oldest driver. The 41-year-old has long ago sullied his legacy as his ‘sell-by date’ is well past.

Kimi’s explanation: “I went close, then had the contact with Seb. We came together and that was it, in the end it didn’t change the end result as we would have both fallen a bit short of the points.”

DRAMA on the final lap, as Raikkonen and Vettel collide fighting over P12#AustrianGP 🇦🇹 #F1 pic.twitter.com/Z7iwK4ylm1 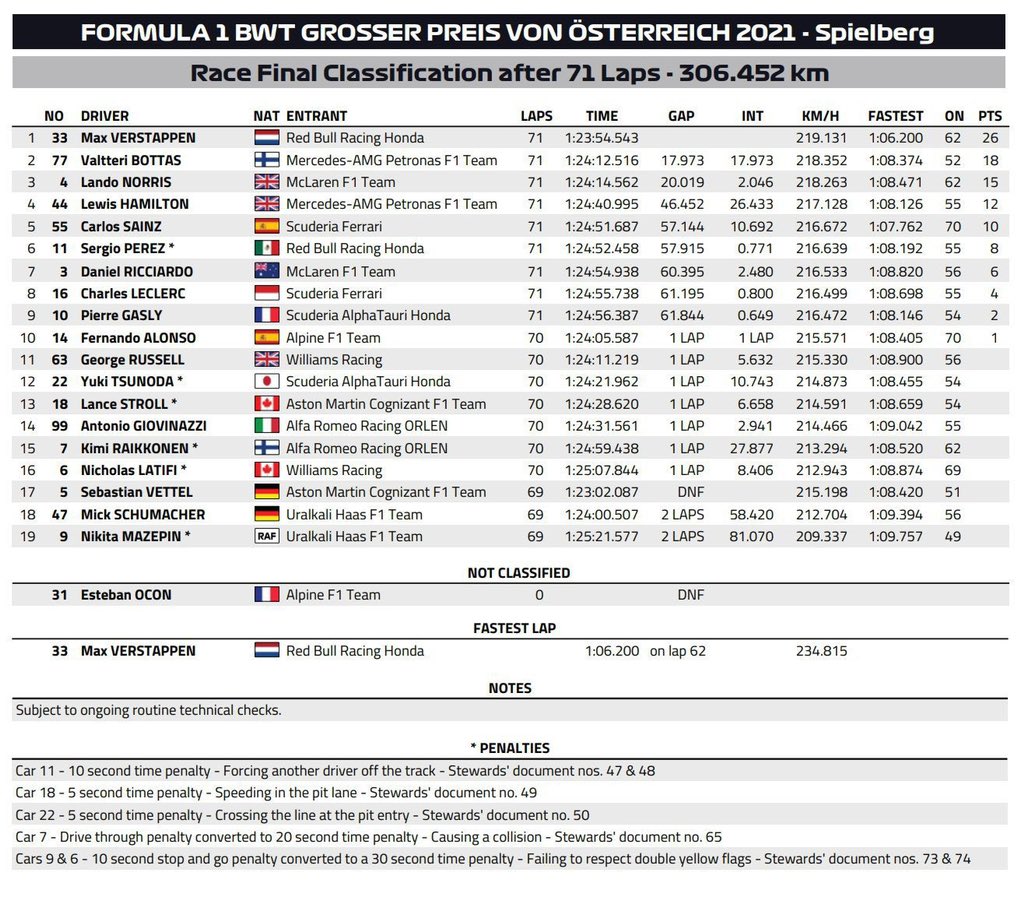 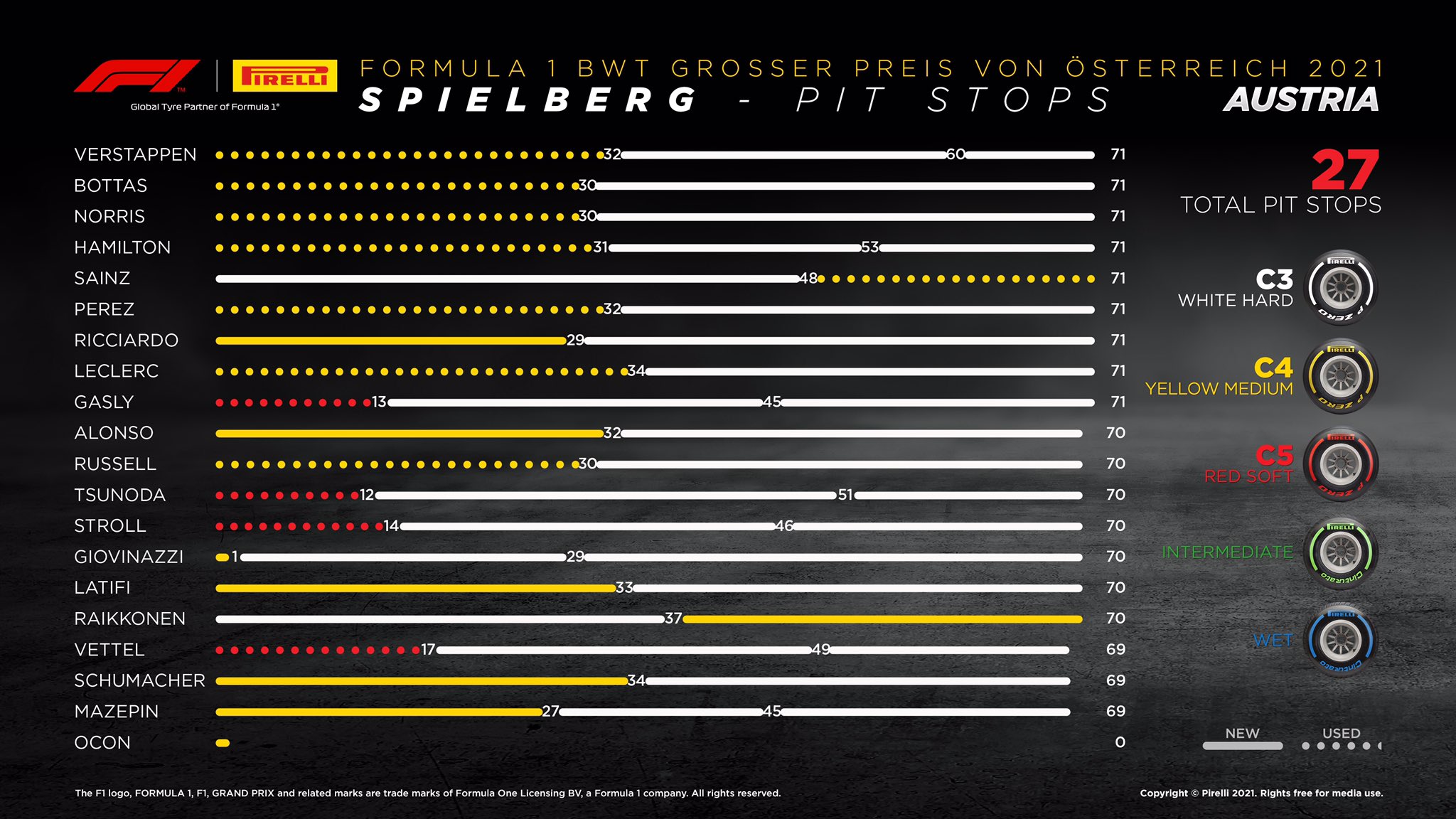 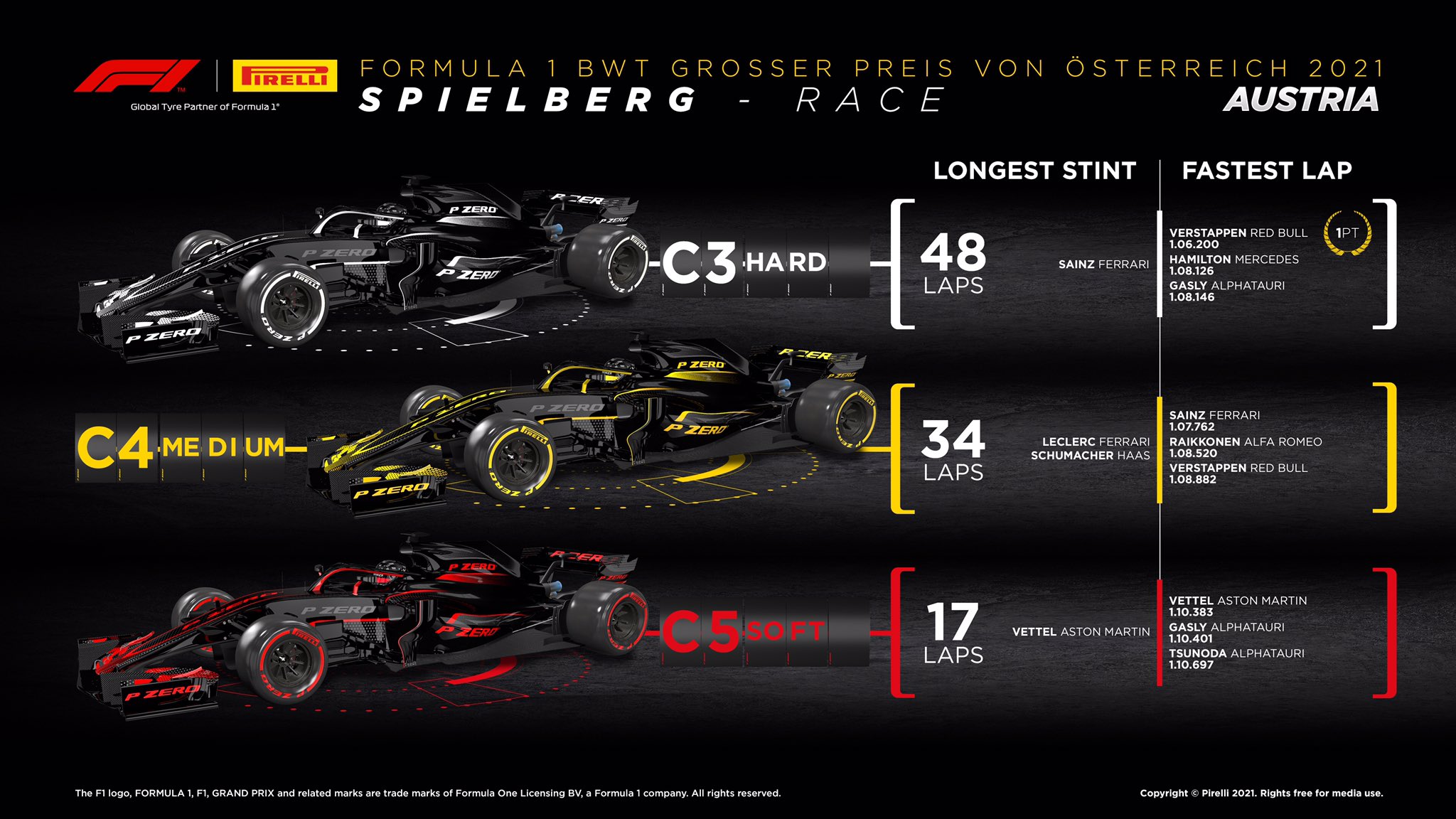 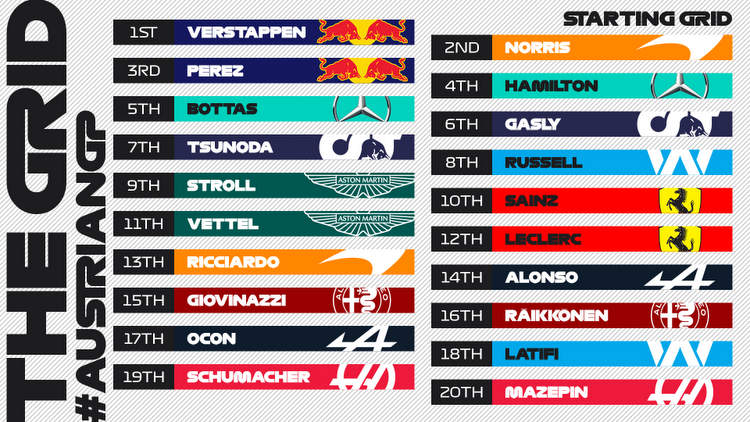 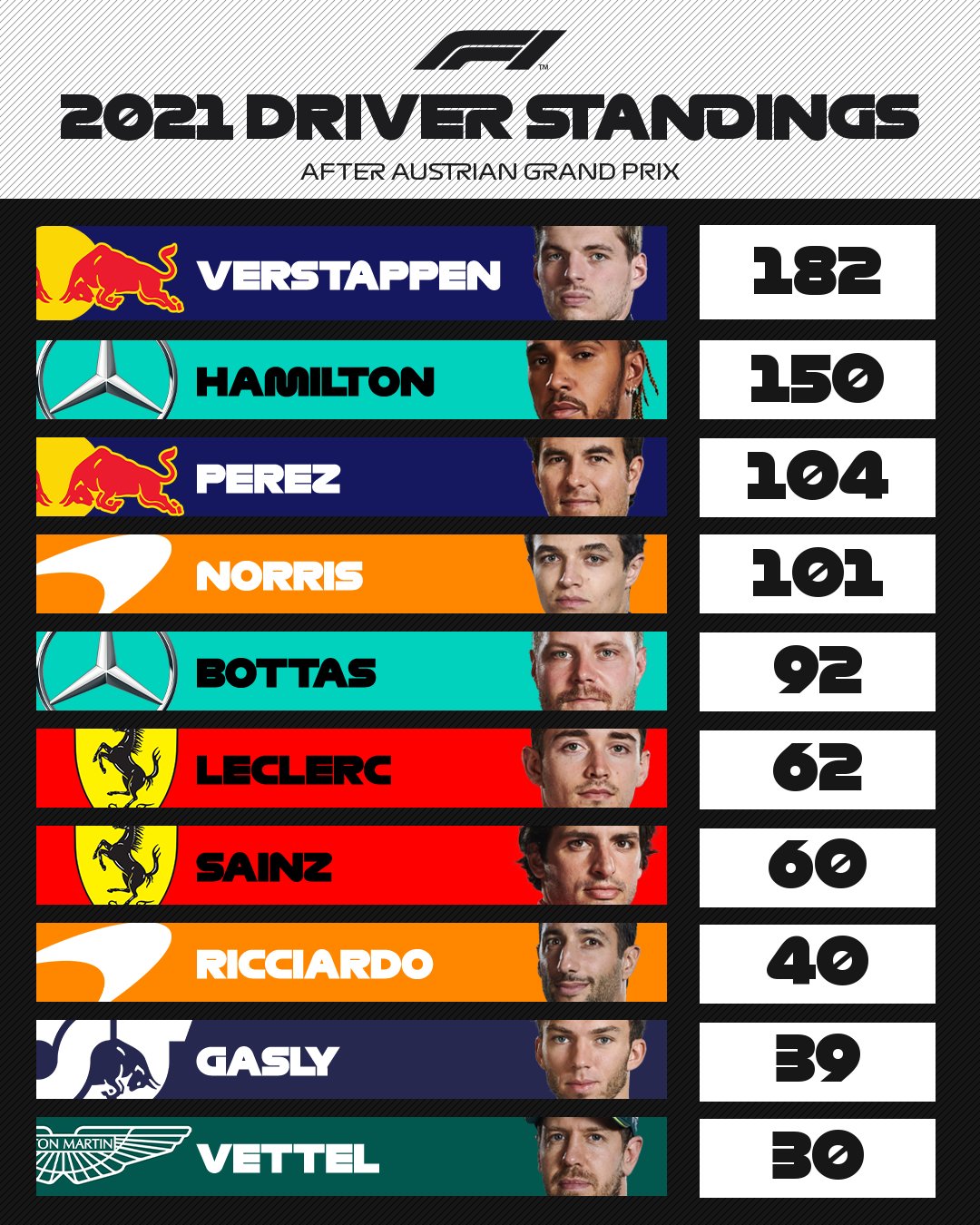