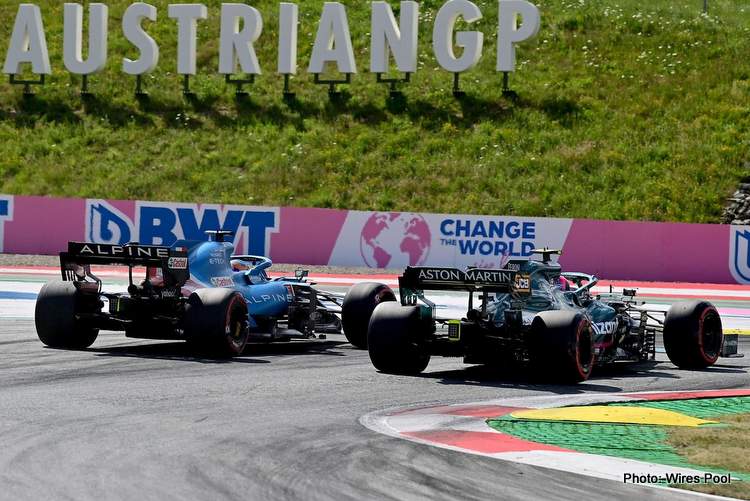 During yesterdays second qualifying session for this weekend’s Austrian Grand Prix, Fernando Alonso narrowly escaped what could have potentially been a catastrophic accident with Sebastian Vettel.

As drivers were attempting to find adequate clear space for a qualifying run, several were slowing through the turns 9-10 complex and the Alpine barely avoided contact with the Aston Martin as Alonso rounded Turn 9 of Red Bull Ring blindly with a closing speed on Vettel in excess of 100 km/h.

Drivers on fast qualifying laps have often been hindered in encountering slower competitors, but this type of extremely dangerous incident is becoming more frequent and is a result of several factors.

Due to the present technical regulations, a current F1 car is predominantly reliant on upper aerodynamic surfaces to create downforce and is extremely sensitive to turbulent wake, making it near impossible to achieve a competitive qualifying time whilst closely following another car.

In satisfying the FIA’s specification of a tyre with characteristics to satisfy the primary objective of “adding to the show”, Pirelli provide a tyre with primary features of a very small peaky performance window of opportunity with an ultimate grip level that often will not even see out a complete lap.

Even though not related to the Alonso incident, the position of the pit entry at the Red Bull Ring is in a dangerous position, essentially on the apex of turn 9, and as the cornering speed of a modern F1 has increased this entry position has become more and more dangerous.

However, whilst Formula One has the “policeman” in the form of the FIA, the Race Director and Stewards, what of the responsibility of the drivers themselves in advocating their own safety and holding their peers accountable?

Indeed, in the Grand Prix Drivers Association, the drivers have an industry body with a prime objective of the advocacy of driver safety.

In the aftermath of the death of Ayrton Senna and Roland Ratzenberger, and the terrible injury to Karl Wendlinger, the GPDA played a critical role in the change of perspective F1 took towards safety, and were instrumental in the legacy that has resulted in the sport being the safest it has ever been.

But, in the absence of horrific reminders, is complacency setting in?

In a perfect world the GPDA could be something different to the pointless toothless tiger that it has now become and hold its members accountable for and to advocate once again for driver safety.