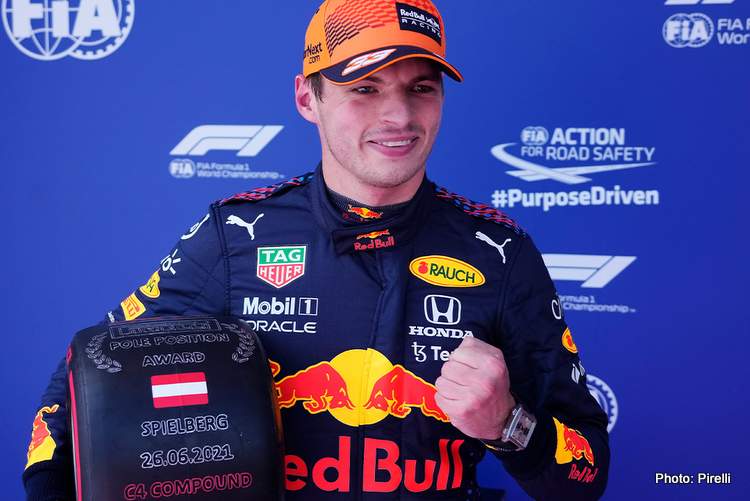 Max Verstappen took pole position at the Red Bull Ring but was made to sweat by the charging Lando Norris, who finished less than half a tenth back.

It was a mighty showing from Norris, who will start alongside Verstappen for his first ever front row grid spot.

Verstappen had looked in control for much of the session, but failed to improve on his final run, while his McLaren rival was able to go quicker in a wonderful effort that left him just short.

Sergio Perez did Verstappen a favour too as he pipped Lewis Hamilton to third, with the reigning world champion having to settle for fourth on the grid for tomorrow’s Austrian Grand Prix.

Speaking after the session, Verstappen was satisfied with another pole, his third in a row and fourth of the year: “I think Q3 was pretty bad. I’m of course happy to be first but not the way we got it. Something to look into, but nevertheless to be twice on pole here is very good.

“Hopefully we can finish it off tomorrow. Softer compounds compared to last week, so it will be tough to manage those in the race, but we’ll try to focus on our own race and we will try to win it. But it’s never as straightforward.”

Norris will be hoping to put pressure on the Dutchman at the start tomorrow and was clearly over the moon with his effort.

“I feel epic,” he said. “It was cool. After the last race I wanted to do that one more step [starting fourth] and I did two more. It’s nice. It puts us in a good position for tomorrow, it’s one of the best laps I’ve done I think. It was a good feeling.”

Perez had looked off the pace for much of the race weekend, but managed to pull out a good lap when it mattered and will provide support for Verstappen on race day from third.

“It’s been a hard weekend up to now,” he added. “We have been chasing the balance and just exploring the car.

“It didn’t come easy. It was very hard work – harder than you think. In the end we got a good lap and we have a good position. I believe we have got a better race car than qualifying.”

Valtteri Bottas was fifth, narrowly behind his teammate, while Pierre Gasly excelled once again in the AlphaTauri to claim P6.

Yuki Tsunoda was seventh, ahead of Sebastian Vettel in eighth, although the German is under investigation due to a Q2 incident with Fernando Alonso.

George Russell was the other big story of qualifying as he made his first Q3 appearance with Williams, the 23-year-old qualifying in ninth, just ahead of Lance Stroll.

Ferrari pair Carlos Sainz and Charles Leclerc were a surprise Q2 exit, with Sainz beaten to the final top 10 spot by Russell, who was 0.006 seconds clear of the Spaniard.

Sainz starts 11th, one place ahead of Leclerc, while Daniel Ricciardo was only good enough for 13th in another poor showing from the Australian.

Alonso went 14th but will surely have questions to ask after the session due to the fact that he was held up by Vettel as he approached the final corner on his last flying lap.

Noooooooooo! Traffic in the last part of the lap. It’s 1:04.970 for this last run. And we hope @F1 have the beep machine ready for Fernando’s on-board radio. #AustrianGP

Kimi Raikkonen and Esteban Ocon were disappointing by comparison with their teammates as the duo were knocked out in Q1, with Ocon in particular really struggling for form since signing a new long-term contract at Alpine.

Raikkonen will start 16th, with Ocon 17th and Nicholas Latifi 18th, the Canadian unable to reach Q2 for just the second time this season.

Mick Schumacher outqualified Nikita Mazepin for the eighth time this year, with the German boasting more than half a second of an advantage over his teammate as Haas locked out the back row once again. 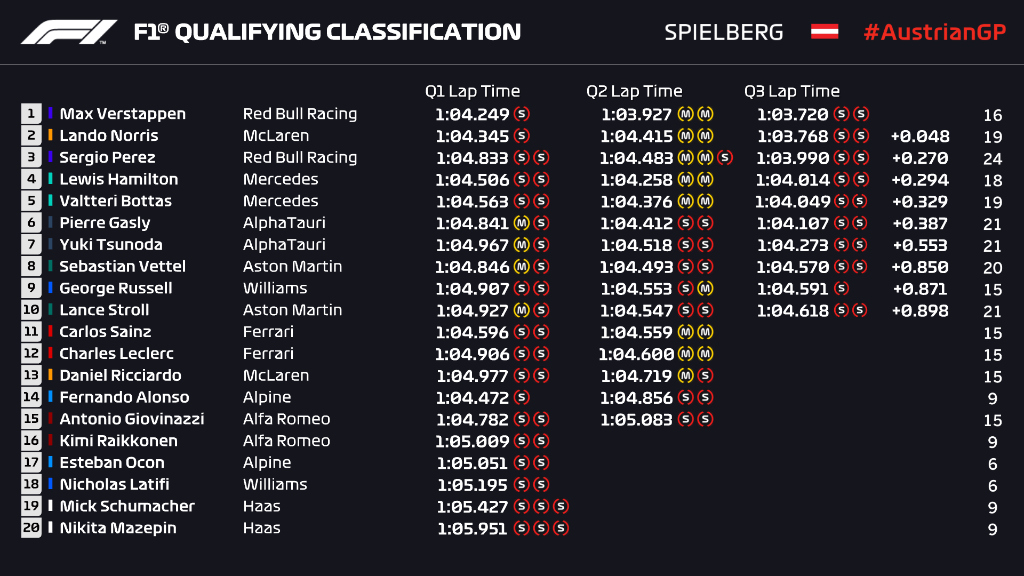 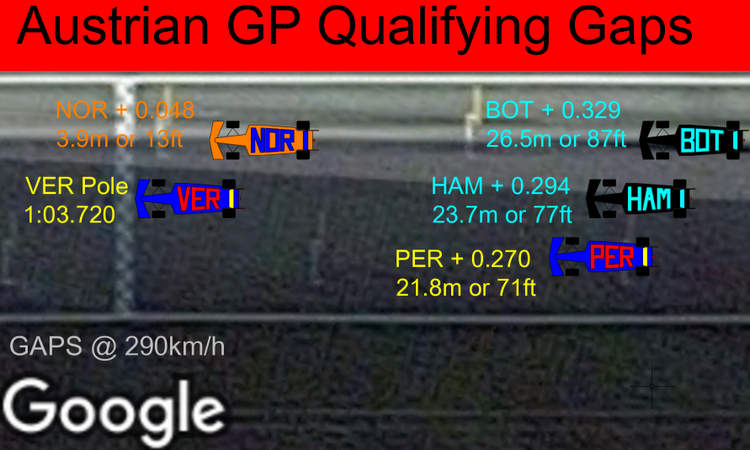 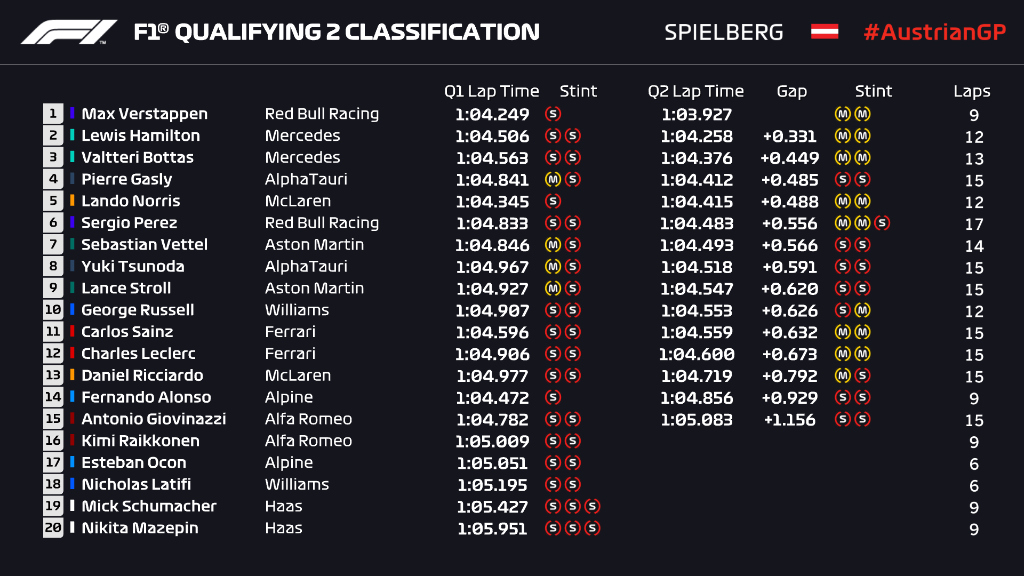 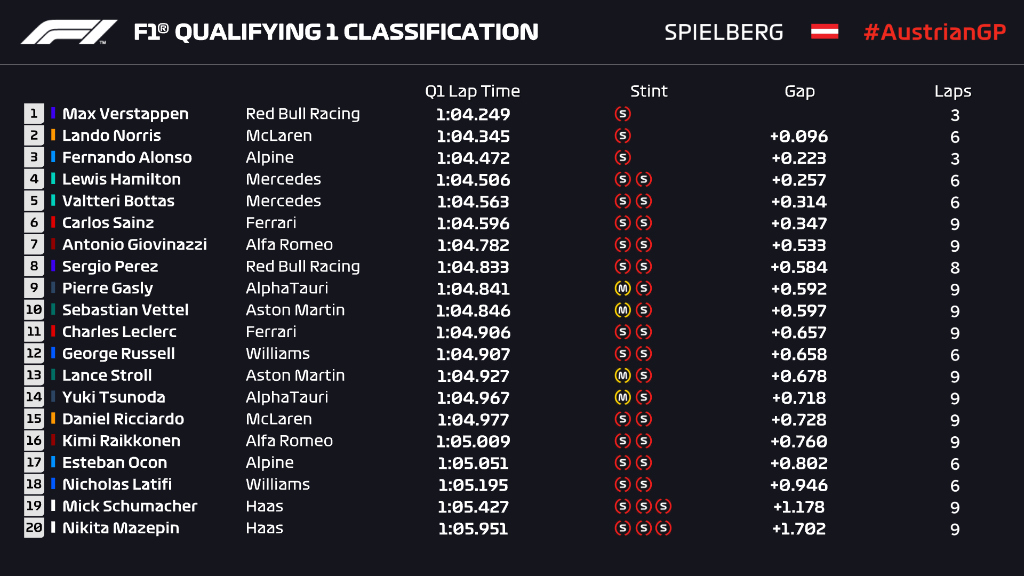 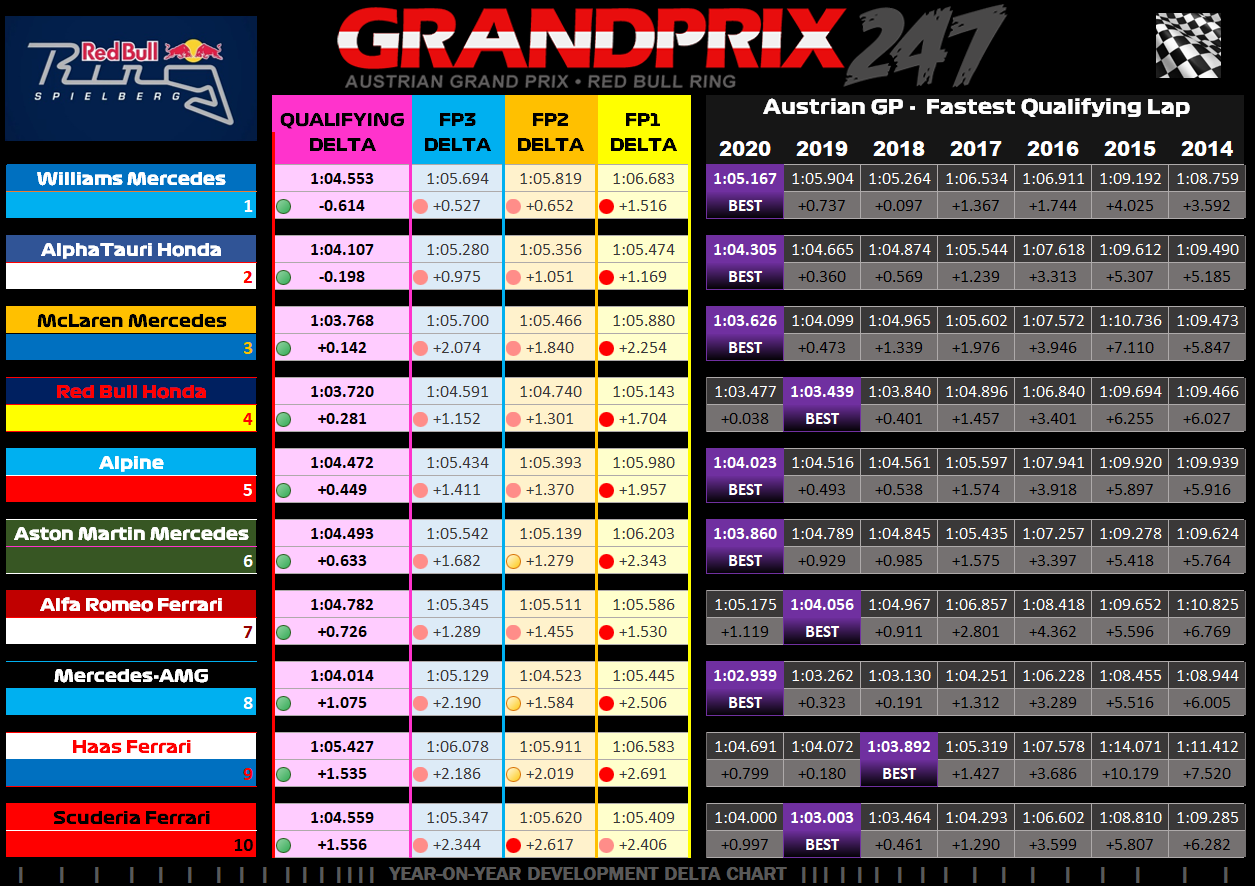