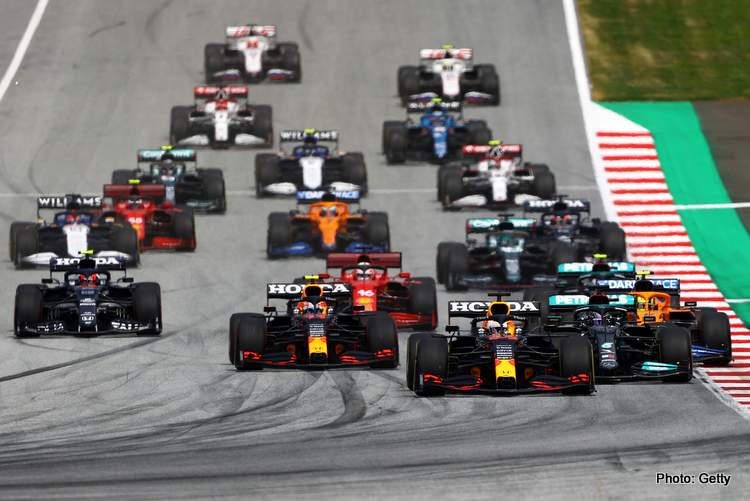 A perfect performance from the sensational and true driver of the day Max Verstappen, compounded by Mercedes’ slip in race-day pace leaves the defending champs with a mountain to climb ahead of the next leg of the Red Bull Ring doubleheader on Sunday.

Let’s crunch the numbers and see what really went on in Speilberg on Sunday.

Below I have assembled “Best Case Race Pace” for the Styrian GP. I have extracted the best lap of each driver for laps between 1-5, 6-10, 11-15…….65-71. I have then averaged those times into one single time to compare the delta between the drivers ultimately representing each driver’s race pace lap time relationship. 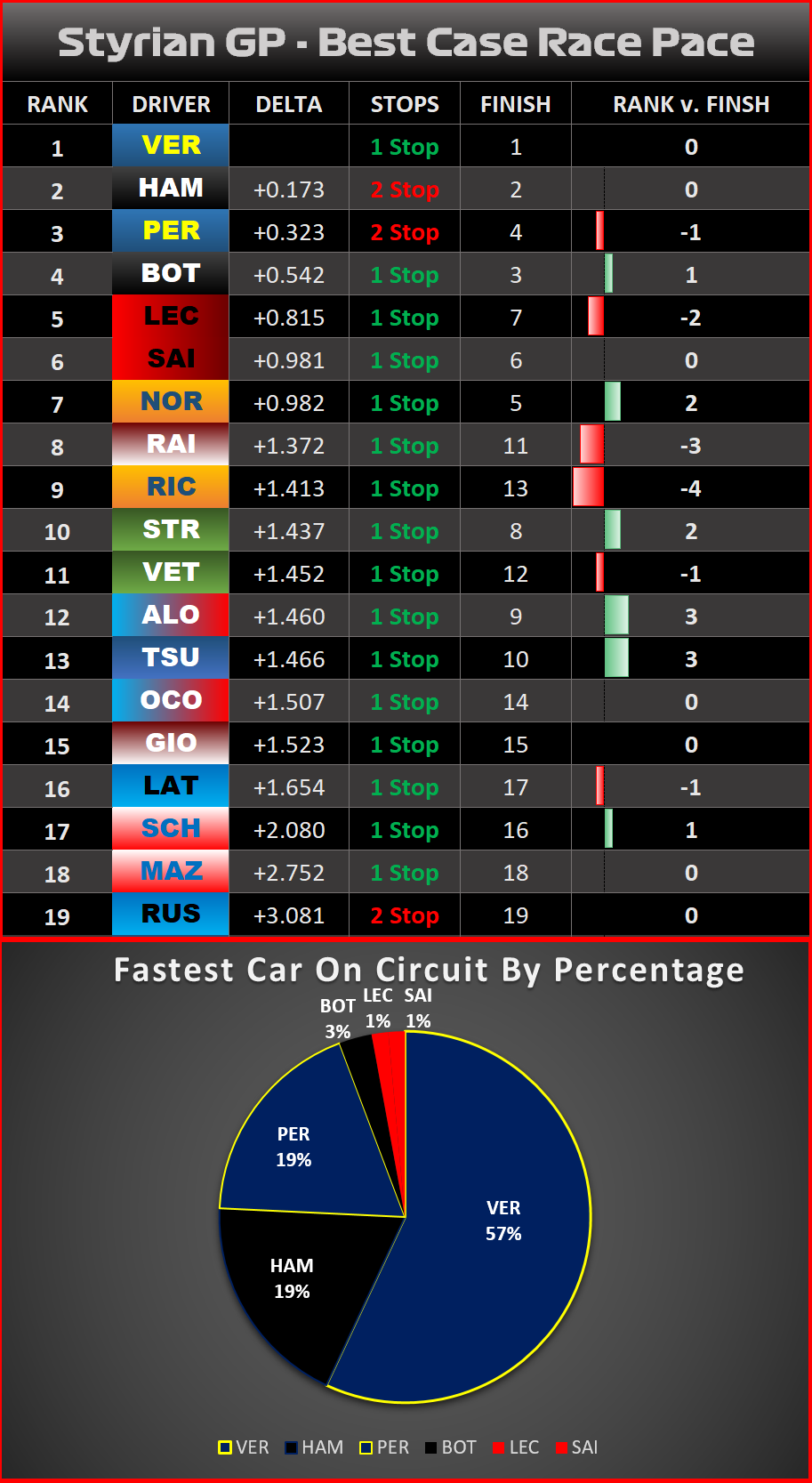 Red Bull have fully assumed championship form as Max Verstappen captured his 14th career win with his most dominant performance to date, and one dreams are made of. Red Bull currently leads Mercedes by 40 points in the constructors’ championship as Verstappen extended his points lead on Hamilton to 18 points.

Today marked not only Red Bull’s strongest race in many years, but more importantly, it was Mercedes’ largest deficit in genuine race pace to another competitor at any time during the current hybrid power unit era which began in 2014.

Per the chart above, Max Verstappen was the quickest car today on average by just shy of two tenths, basically a continuation of what was seen during qualifying between the two rivals. Lewis simply could not match Verstappen’s pace at any time during the race, notably towards the end of the race in particular.

The sore spot that has been the first pit stop cycle for Mercedes was cleaned up today by both Mercedes and Hamilton. Verstappen had the quickest in/out lap combined time, but those times include the pit stop.

Hamilton spent 0.283s longer on pit lane than Verstappen yet was only 0.177s slower on the elapsed in/out lap combined time, thus there’s nothing to speak of here as it was essentially dead even and it’s commonly known how quickly the Red Bull pit crew services their drivers.

Valtteri Bottas recovered appropriately to round out a double Mercedes podium finish, a marginal reduction in damage of recent point’s loss Mercedes has suffered to Red Bull.

It’s notable as Sergio Perez was on course for the final podium position but a reoccurring slow left rear tyre change was just enough to help Bottas steal the position instead. 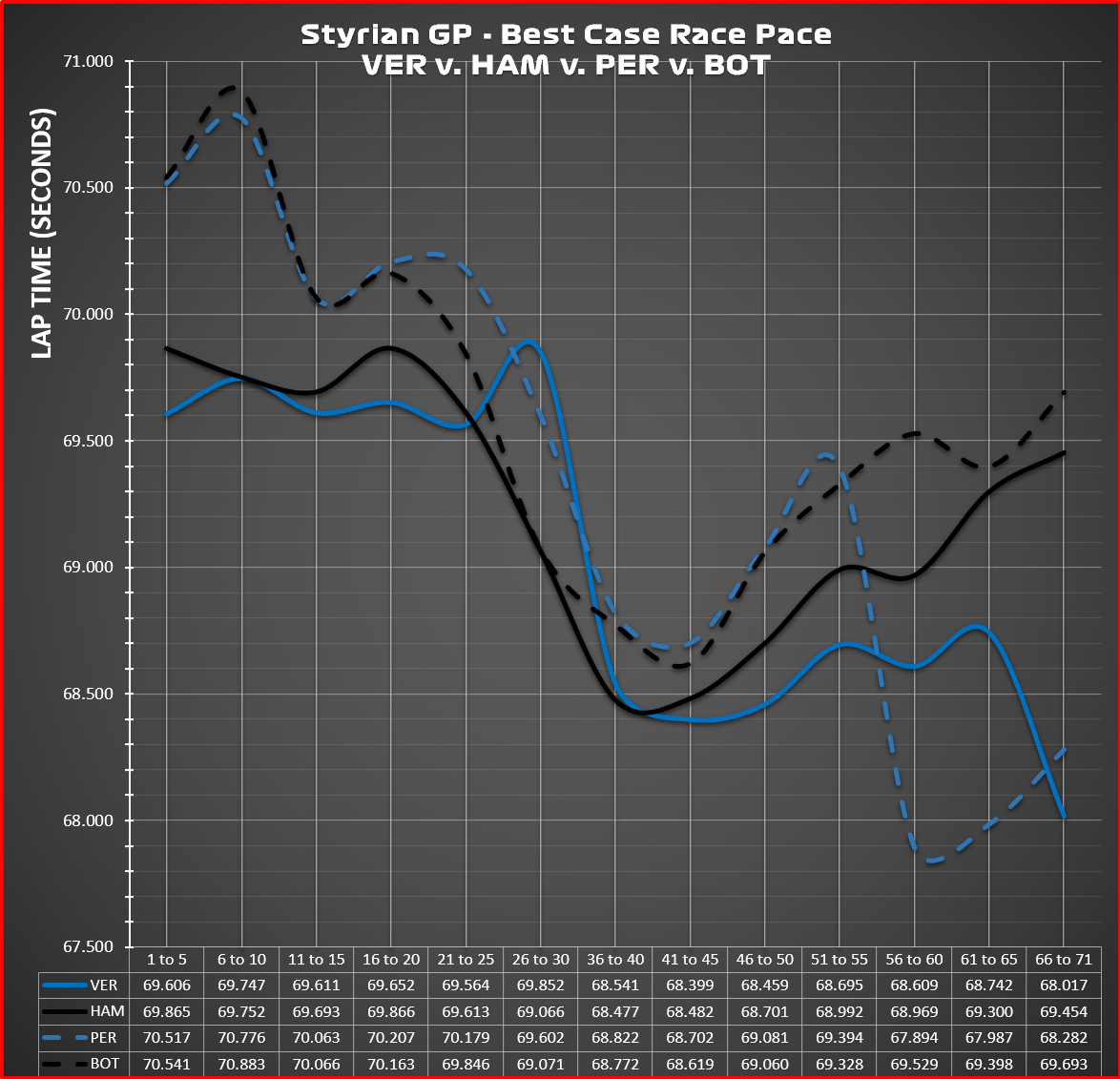 Lando Norris scored again as the best of the rest finishing fifth, and interestingly a lap down to the leader. Lando Norris managed to maintain his fourth position championship standing, behind Perez by ten points and ahead of Bottas by eight.

Daniel Riccardo got his groove back in the previous race in France but has lost it again finishing a devastating 13th today, startlingly four-tenths per lap slower than teammate Lando Norris.

The result for McLaren equates to a net loss of four constructors’ points to Ferrari. Despite Ferrari’s somewhat poor Saturday qualifying session, seventh and 12th for Charles Leclerc and Carlos Sainz, respectively, and front wing damage for Leclerc on the opening lap, both drivers of the Italian outfit recovered to score what should be interpreted as maximum points given the circumstances.

Charles Leclerc made bizarre contact just after Turn 1 on the opening lap of the race with Pierre Gasly resulting in an unnecessary stop for Leclerc to repair his front wing, and a DNF for Gasly. Charles Leclerc would find his feet and deliver an epic race back to the front of the midfield, and was awarded F1’s driver of the day award for his fine work.

Behind the third position constructors fight of McLaren v. Ferrari was the Lance Stroll led AlphaTauri, Aston Martin, Alpine battle. Gasly retired on the first lap after a tire puncture resulted in suspension failure by the time he was able to get his AT02 AlphaTauri challenger back to pit lane for service.

Gasly was on for a top ten finish yet despite this, AlphaTauri remain two points clear of Aston Martin in the constructors’ championship. Alpine continue to lag behind as they’ve struggled to bring both of their cars home for points again on what has been on a consistent basis.

Alpine are currently 15 points behind AlphaTauri and sit in seventh place in the constructors’ championship.

Alfa Romeo continue as the leader of the bottom three teams by two points without anyone scoring any points again today, but it was close. George Russell appeared to be in contention for Williams’ first points finish this season today, unfortunately, his race was ended with a power unit issue.

Kimi Raikkonen quietly put in a successful race, charging from 18th on the grid to nearly scoring a point by the time it was over in what was the Easter egg of the race. 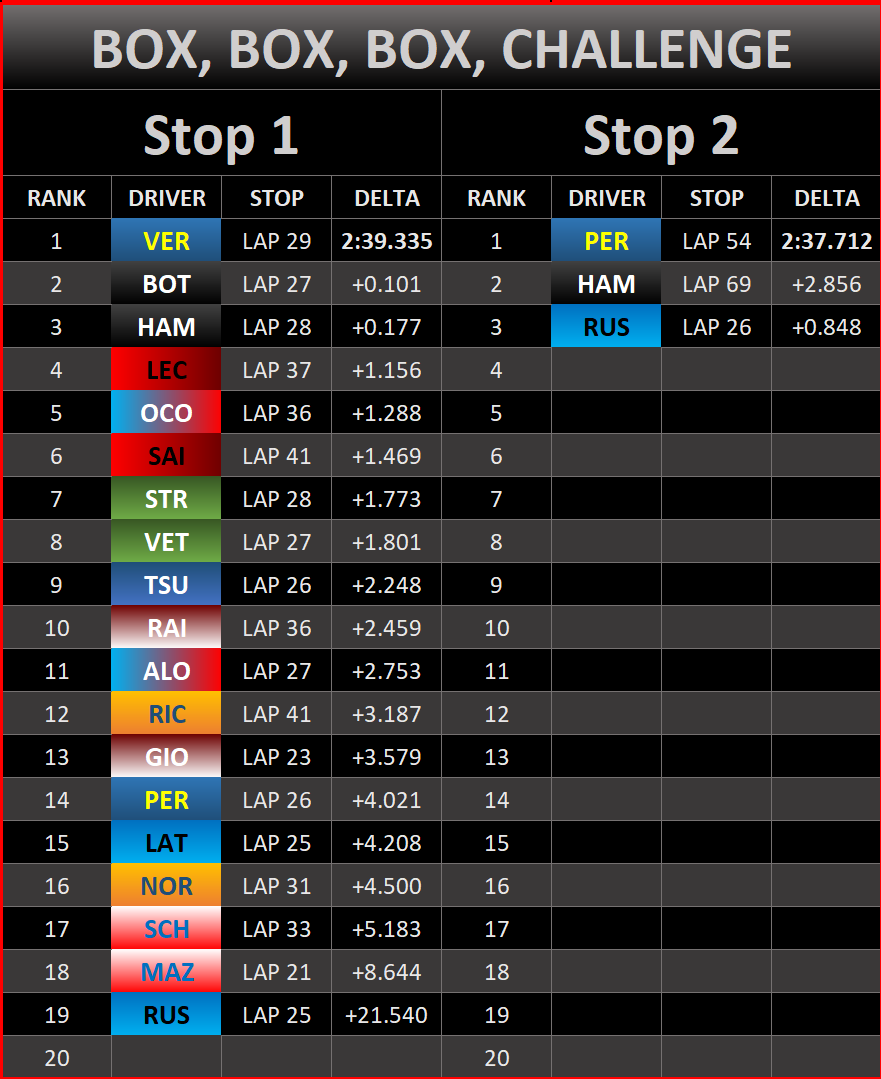 While much emphasis was on the lead battle, there was a silent midfield killer, and it was the first stint/hard tyre strategy.

The entire midfield missed it and it was key to Raikkonen’s strong race from 18th to 11th. More notably it played an obvious role in Leclerc’s impressive recovery, likely saving him from a soft tyre strategy train. Raikkonen and Leclerc ran the hard tire for an equal length of 36 laps, and most importantly far longer into the race then the main midfield drivers could with their soft and medium first stint tyres.

Closing Out The Triple Header

A discussion with regular GP247 contributor aknit helped highlight the importance of tyre selection as Pirelli’s original publishing in February for tyre allocation for the coming Austrian GP was the tyre range which was instead used today for the Styrian GP. The second leg in the double header, this coming Sunday’s Austrian GP will feature the softer range of tyres reminiscent of last year’s Silverstone double.

The current weather forecast appears to be a near replica of this weekend’s race with 27°C ambient air temperature currently shown for Sunday.

With a shift to the softer range of tires it wound seem obvious that we may see mainly the hard tire run in Q2 as they will effectively be the medium tyre from this week. Or, will we see an entirely new strategical format with teams moving to a two stop as not a single driver went to softs on their second stint today? 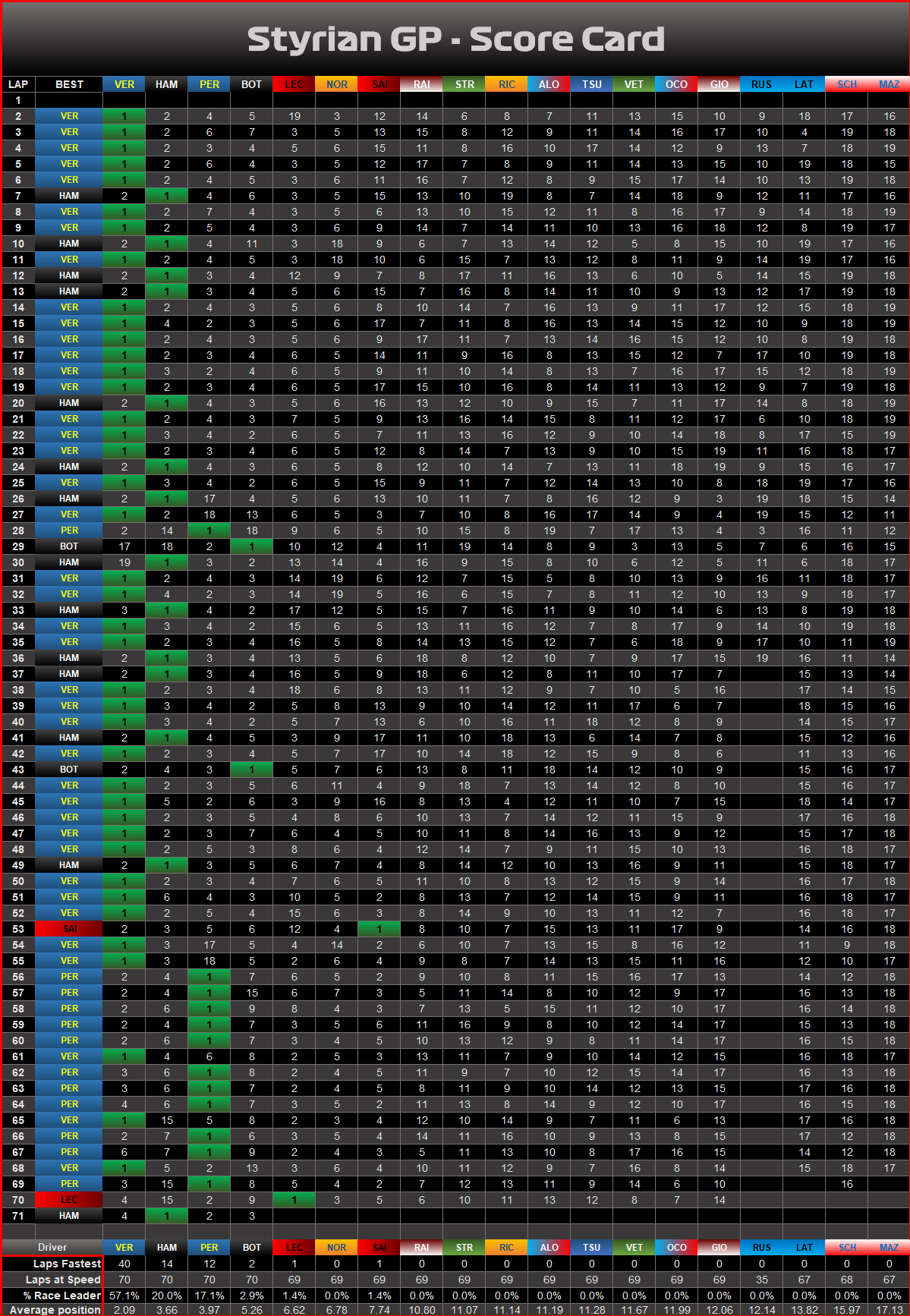