PV=nRT and why Formula 1 tyres fail at high speed 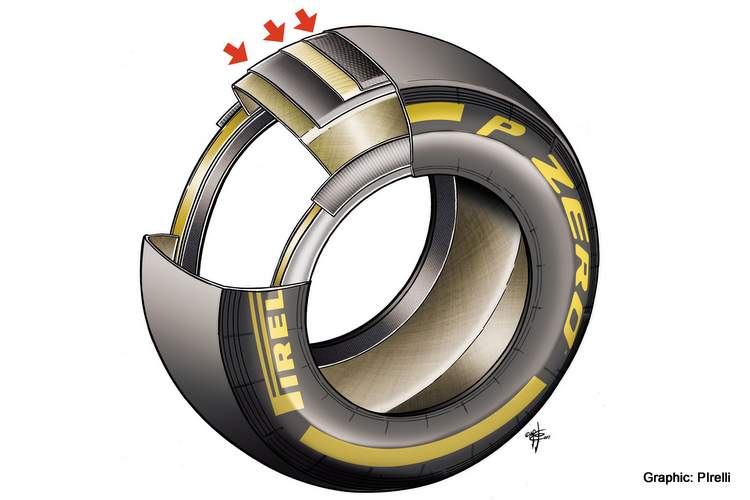 The retirements of Lance Stroll and Max Verstappen from the 2021 Azerbaijan Grand Prix because of tyre failure is a hot topic, but it is not uncommon in F1 for tyres to fail and they do so for several reasons.

Whilst this article will explore possible modes of failure of F1 tyres, it will in no way be a root cause analysis of the recent failures in Baku, nor a critique of Pirelli the current contracted F1 tyre supplier.

Quite obviously the tyre is a critical component of an F1 car. Understanding and predicting its behaviour is one of the prime keys to performance. Quite simply an F1 tyre is designed to absorb and transmit energy, in very large magnitudes.

A Formula 1 tyre is light, strong and like any component on the car, it is operating at the limits of performance. The modern F1 generates lateral corner loads that are higher than at any other stage in the history of the sport.

The tyre transmits enormous loads in traction and braking and absorbs extreme amounts of radiant heat from carbon/carbon braking material systems. As part of its design brief, an F1 tyre generally has an operational duty cycle of 120-150km.

An F1 tyre is quite complicated in design ensuring that it can withstand the very high duty loads placed on it in operation. The technologies used in its design and manufacture are very advanced. The construction of the F1 tyre is a matrix of rubber and polymers forming the tread and sidewalls that are tied together with an underlying structure of steel, nylon, polyester and Kevlar bands.

When analysing an F1 tyre from a structural perspective it is important to acknowledge the structure is indeed a composite matrix of different materials; structural fibres and binders holding them all together.

The tyre composite matrix is susceptible to fatigue due to cyclic pressure changes, heat cycles and mechanical loading. In its operational environment, the most stressed area of the tyre’s structure is the wedge, which is the belt of fibres that join the tread platform to the sidewall.

Part of understanding tyres in F1 comes with the acceptance that, like many high-performance components that are pushed to envelop boundaries, the risk of failure is elevated.

An F1 tyre will generally fail due to deflation or structural failure. Understandably and quite often a tyre failure will occur at high speed and result in an impact of some sort that may damage the tyre and make a root cause determination difficult.

Understanding deflation failure is comparatively simple. Tread platforms are often breached (cut) by debris on the circuit, sidewalls cut by contact with another car, or worse, the wall. Slow leaking deflation will often be observed by the race engineer through telemetry before a driver even feels a performance change.

At times depending on its nature, a deflation breach can cause sudden structural failure, particularly at high speed resulting in catastrophic pressure loss. It is not unusual for punctures of the tread platform, particularly slow deflations to result in a delamination of the platform.

Exceeding the duty cycle of the tyre tread compound can lead to excessive wear ultimately causing delamination of the tread from the platform and exposing the underlying structure to failure. As the delamination progresses there is usually an associated rapid pressure loss and at times it can induce failure of the structural carcass.

The carcass structure of the F1 tyre bears the entire stress load of the energy the car transfers to the road surface. However, a tyre is never subject to a singular stress. Rather, the F1 tyre at any given moment during operation is coping with a combination of multiple stress sources in a very dynamic environment.

In the pursuit of performance on turn-in, grip can be improved by increasing the negative camber of the tyre. This is achieved by leaning the top inner shoulder of the tyre inwards towards the centre of the car. Improving tyre grip levels is also achieved by lowering the static pressure in the tyre.

However, both methods move the ground contact patch of the tyre inwards towards the sidewall shoulder. This creates high stresses in the shoulder structure under higher lateral loads or when the tyre impacts a kerb.

In mandating static tyre pressure increases and maximum negative camber limits the contact patch is moved outwards and decreases the energy transmission through the sidewall shoulder.

Moving the contact patch inwards is not the only benefit. When static pressure is lowered, the sidewall of the tyre becomes more compliant and transmits energy better giving more grip. However, as the tyre structure flexes in compliance it produces heat and the carcass structure temperature rises.

F1 tyres running across kerbs under high lateral loads also expose the tyre tread platform to a higher risk of cutting, especially if the kerb is serrated.

From 2012 onwards the carcass radial belts in an F1 tyre changed from Kevlar to steel to ensure a more robust structure. However, the improvement in structural integrity was a trade-off because the steel belts operate about 10°C higher. This elevated temperature has created a higher risk of kerb riding resultant shockwaves causing structural compromise.

PV=nRT is Avogadros Law or the Ideal Gas Law which is one of the fundamental laws of physics. It tells us that gas pressure and volume are directly proportional to its volume. When the temperature of the gas inside an inflated F1 tyre increases the pressure increases with it in a linear manner. Any increase in pressure undoubtedly exerts additional stress on the carcass and likewise excessive thermal strain.

As the binding bonds in the composite matrix of tyre fatigue, particular areas in the structure can be susceptible to failure. Often this will occur in the wedge or join between the sidewall and tread platform where stress concentrations occur as discussed previously.

There is often no warning or predictive metric for a failing tyre structure, it can be sudden and catastrophic. Quite often a structural failure will be indicated by detachment of the sidewall from the tread platform.

Formula One is in an era witnessing the most advanced and highest performing machines in the history of the sport. The loads, stresses and energies transmitted through the tyres are at the highest magnitude they have ever been and failures are to be expected.

However, the question of what level of tyre failure is acceptable is very important. Championship deciding results are at risk, but more importantly, so is the health and safety of drivers, marshals and spectators.