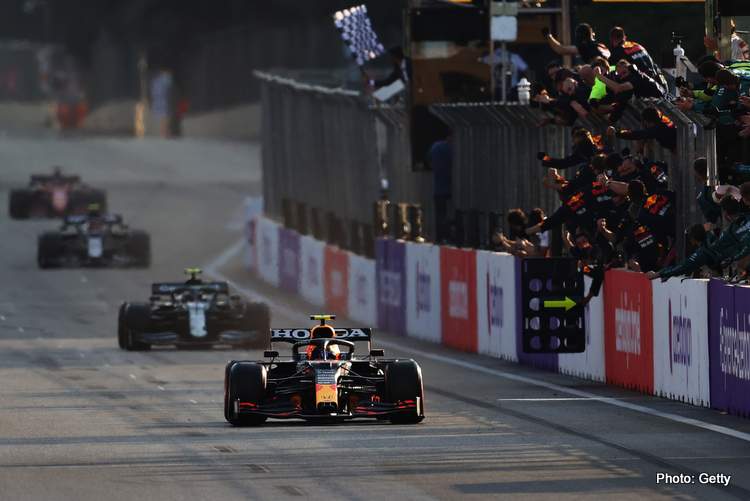 Seemingly destined for an impressive Red Bull one-two, the 2021 Azerbaijan Grand Prix delivered a wicked twist tight at the end of a memorable race packed full of drama and surprises.

Looking back on Round 6 of the championship, let’s crunch the numbers and see what really went on at Baku City Circuit.

Laps between 31-35 & 47-51 have been ignored due to the safety car. I have then averaged those times into 1 single time to compare the delta between the drivers ultimately representing each driver’s race pace lap time relationship. 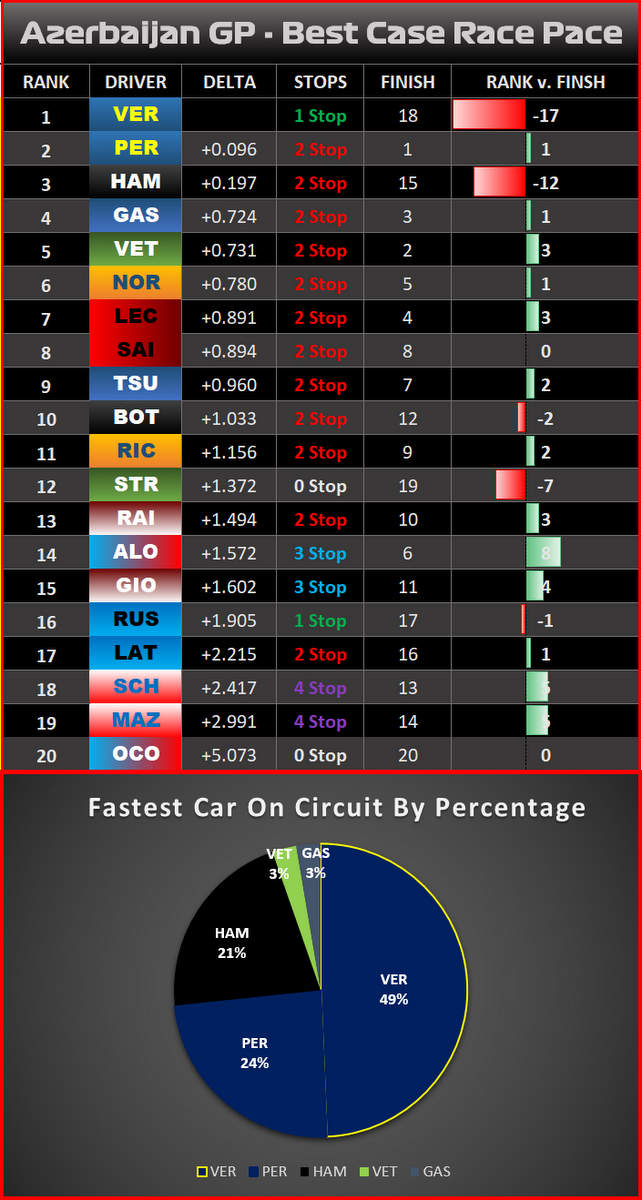 The Thrill of Victory & The Agony of Defeat

F1 saw a return to 2021 normalcy as Red Bull and Mercedes resumed their direct championship battle on the streets of Baku. For the second time this season Red Bull clearly showed better race pace, having done the same at the previous race in Monaco.

Per the chart above, Max Verstappen was the quickest car today on average, and showed that by heading the grid convincingly as the fastest car on circuit 49% of the race. Unfortunately a bizarre late race tyre issue would see Verstappen forfeit certain race victory.

Sergio Perez has been praised for his race pace this year by Red Bull team principal Christian Horner despite never being any better than three tenths slower per lap than his brilliant teammate Verstappen.

The Azerbaijan GP represents the first race in which the Mexican has shown identical race pace to Verstappen over the course of a grand prix. The result of Checo’s strong showing today was that Red Bull we’re able to gang up on Hamilton and did so to perfection today after years of trying.

Lewis Hamilton was the early race leader but was never comfortably nor completely out of reach from his Red Bull rival Verstappen. The Baku City Circuit has historically been favourable to Mercedes but today it was clear, Red Bull’s challenger was not only capable of taking the fight to Mercedes, but more importantly, Hamilton too. 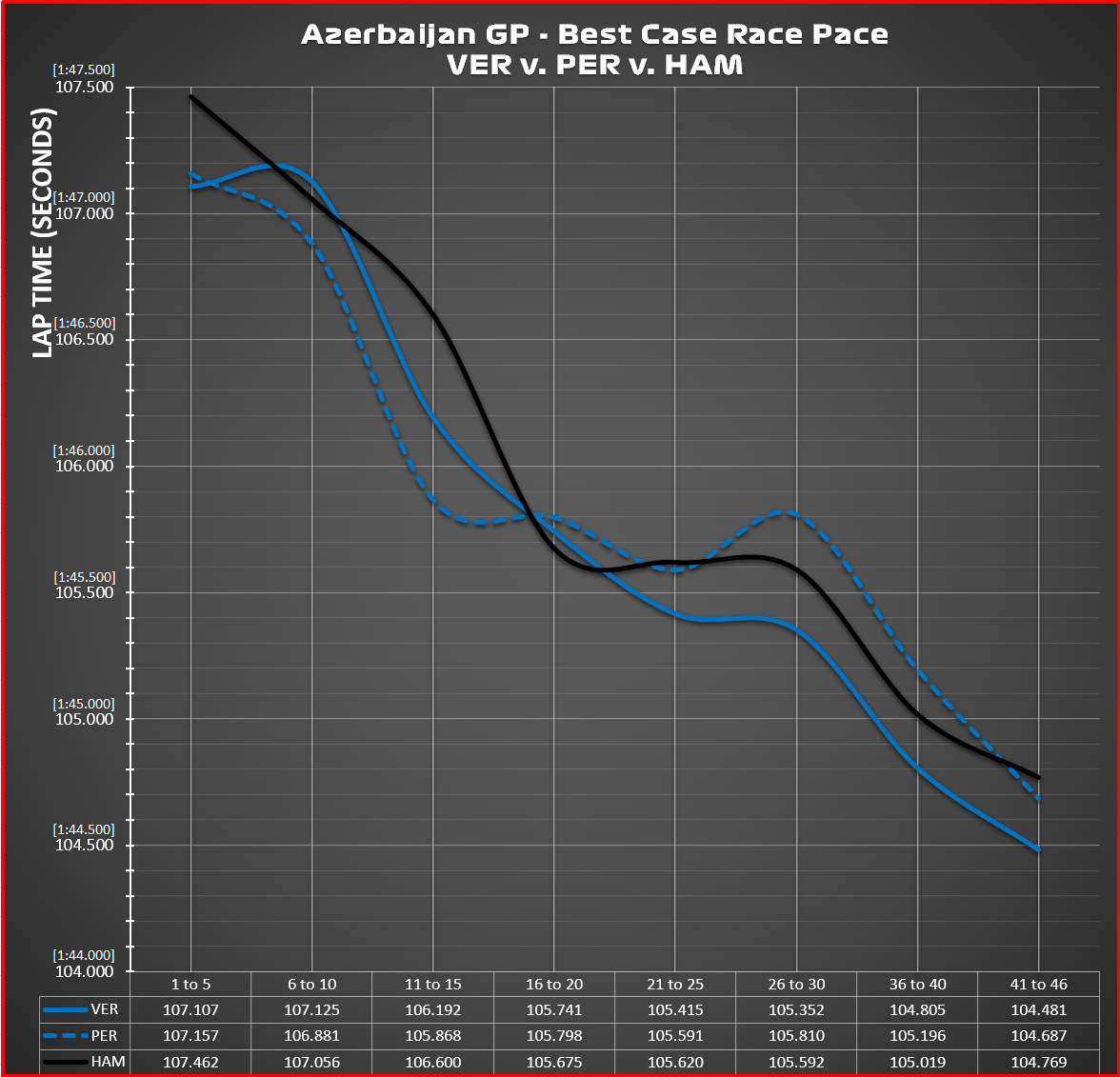 The remainder of the F1 field ended up the better part of a second per lap on average slower than the front three drivers which has more or less been normal this year.

Sebastian Vettel and Pierre Gasly notably punched above their weight class finishing ahead of the Ferrari v. McLaren battle. Charles Leclerc reigned supreme in holding on to fourth position from Lando Norris despite Norris having very good race pace.

Time to grab a coffee and maybe a calculator too. This was the pivotal phase of the race for Red Bull, and one they succeeded in getting absolutely right.

Mercedes on the other hand completely blew it and are now on a two-for-two run of disastrous first pit stop cycles.

A unique and challenging feature of the Baku circuit is the chicane style pit entry. It doesn’t get the attention it deserves, nor is it properly watched throughout the race despite the impact it has on in-laps.

On lap 11 Mercedes blinks first and Hamilton pits, importantly setting a target in-lap time for Red Bull of 1:51.218 and spending an elapsed time of 22.470 on pit lane from start to exit.

Then it was time to pit Perez and he delivered a fully committed in-lap complete with an insane run through the pit entry chicane beating Verstappen’s very quick in-lap by an astounding 0.429 seconds and in the process setting the fastest in-lap of the day.

I recommend looking for a video of Checo’s run through the pit entry chicane as it was breathtaking. While it would have been highly unlikely that Perez would have jumped his teammate for the lead of the race, one has to imagine if Perez didn’t lose the 2.1 seconds on pit lane due to a slow left rear tyre change, a Gasly vs Vettel Monaco style shootout exiting the pits had to have been on the table.

Simply put, Checo’s perfect charge through the pit entry chicane more than likely put him in the position to win the race.

To answer Hamilton’s question as to why Verstappen was so far ahead after the first pit stop, a combination of a timid in-lap, and terrible luck having to wait for another car to drive past Hamilton before he could be safety released was how Hamilton and Mercedes fumbled the race lead and turned it into third position in the running order.

A noteworthy Easter egg of the race hidden in the fight behind the leader was Vettel’s pit cycle. Pitting on lap 18, Vettel delivered the second-fastest in-lap of all drivers, complete with a lock-up at pit entry having also charged in as quickly as possible, and only marginally slower than Perez.

Aston Martin performed exceptional service getting the German off pit lane in appropriate time. When the sum of in-laps and out-laps are compared amongst all drivers, Vettel was fastest, posting a total time of 3:53.151, which was 0.189 seconds faster than Verstappen, 1.188 faster than Perez and a brutal 4.750 seconds faster than Hamilton.

It’s more evidence that Seb did indeed find the ON button in Baku on Sunday. 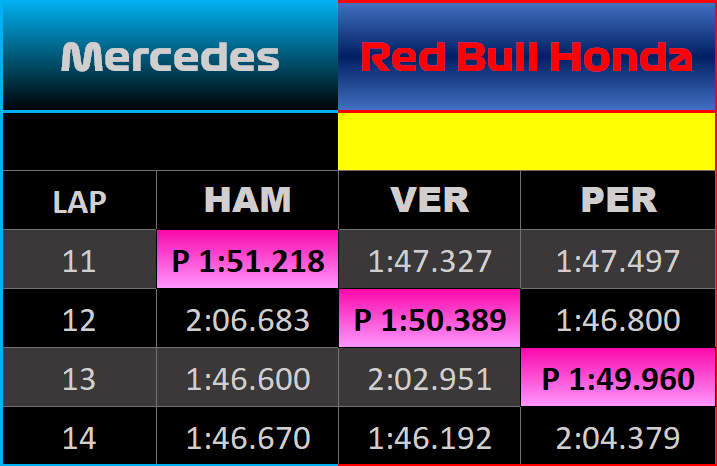 Despite the hysteria of a late race restart, the most peculiar piece of data despite every car pushing hard on the last lap is not a single driver improved on a previous fastest lap.

More importantly a point for the fastest lap was not awarded in Baku as Verstappen held on to it. In a season where every point is crucial especially in the heated mid-field battle, one very important point managed to get away today.

With a tripleheader ahead in a fortnight’s time, we’re going to be getting to the real “nitty gritty” of the season, where the pressure will be amped up on everyone. 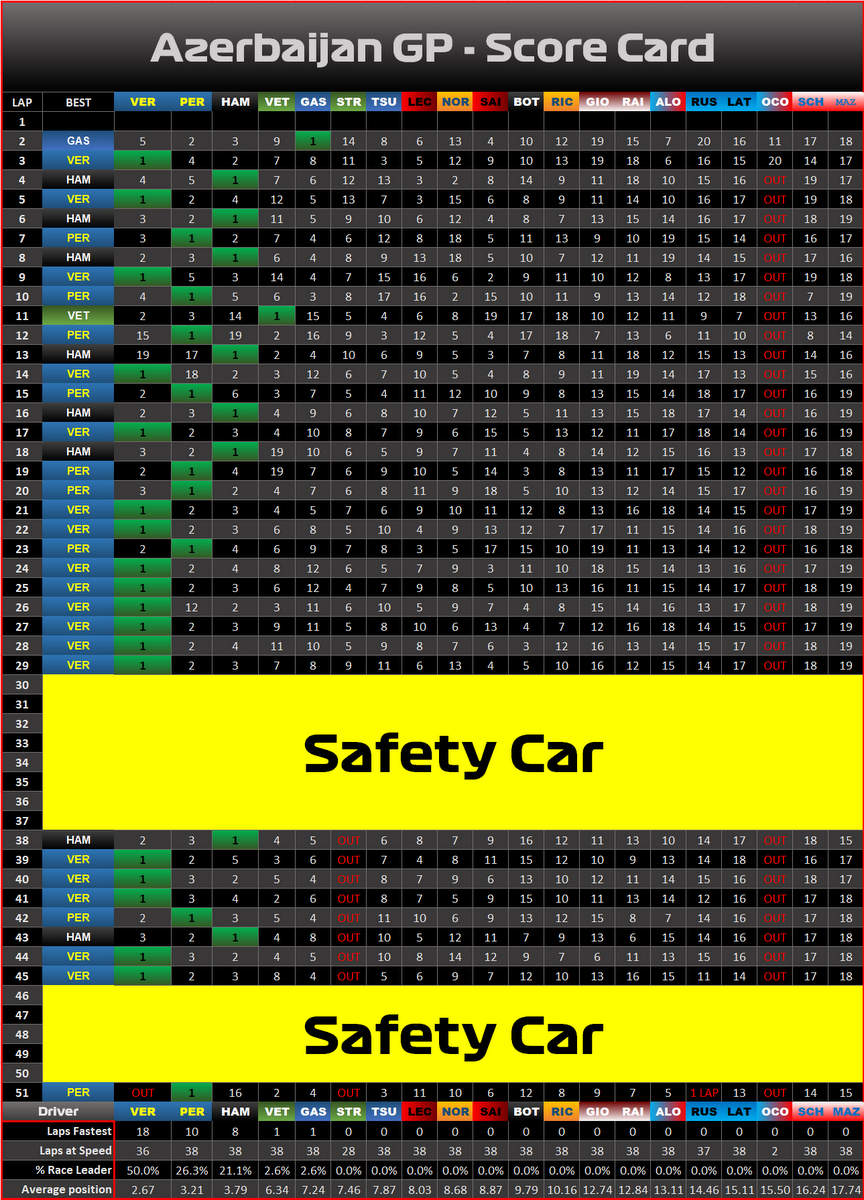