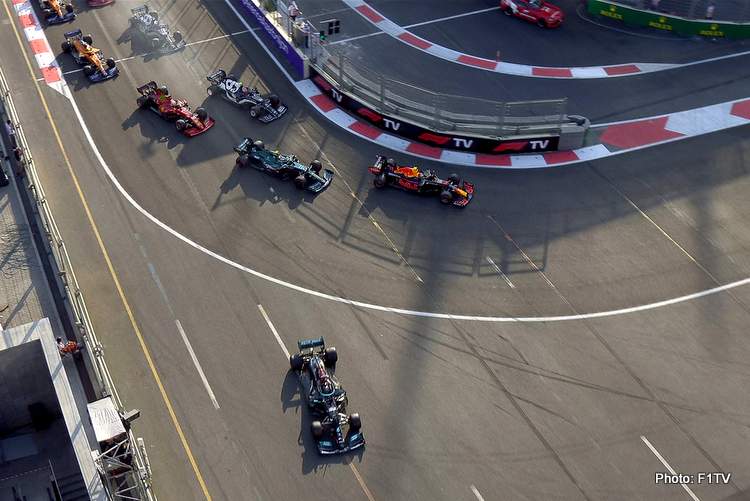 Max Verstappen crashed out of the lead of the 2021 Azerbaijan Grand Prix with a comfortable victory in site, but on lap 47 of 51 the Pirelli on his Red Bull burst, ending his race in the wall.

The incident brought out the safety car as the wrecked Red Bull and the delaminated tyre bits were cleared. This handed Sergio Perez the lead behind the with Lewis Hamilton second and Sebastian Vettel in third.

Earlier the Pirelli on Lance Stroll’s Aston Martin tyre burst in a similar fashion ending the Aston Martin driver’s race in the wall, which will put the Italian manufacturer firmly in the spotlight to explain the failures that could impact this year’s F1 world championship.

Before the blowout Verstappen, was powering to a commanding victory, with teammate Perez playing the rear-gunner role to perfection, on what was looking to be a perfect afternoon for Red Bull as a one-two beckoned. But what was to come was as cruel as it gets for a team.

Max is out of the car. It looks like an issue with his left rear tyre has caused his dramatic exit #AzerbaijanGP 🇦🇿 #F1 pic.twitter.com/2LMONjC1qJ

Surprise pole-winner Charles Leclerc led the first lap, but by lap two he started a freefall down the field as Verstappen and Perez took up the chase early on. Mercedes pitted Hamilton on Lap 10, it was a tardy affair that cost the World Champion more than a couple of vital seconds.

Verstappen stayed out a lap longer, pitted and emerged in the lead on lap 14, with Perez stopping the next time around to emerge second, ahead of Hamilton who was relegated to third, much to his chagrin.

Verstappen crashes into the barriers on the main straight and is out of the race #AzerbaijanGP 🇦🇿 #F1 pic.twitter.com/cpiNig7eL8

But those 48 laps were rendered almost insignificant when the race was stopped on lap 49, with teams allowed to change tyres. At the restart, Verstappen’s afternoon brightened substantially as Hamilton made a bullet start but overshot and went straight through Turn 1.

Perez said thank you very much and took a fine victory for his team on a day he ticked every box his team could wish from wingman to taking control and bagging maximum points. An important victory for him.

While Verstappen led, the Mexican played the role of wingman to perfection, keeping a cushion between the team’s ace and title rival Hamilton.

Always within a handful of seconds of the leader as if anticipating a twist. One could argue that a slow pitstop cost him the lead after a flurry of great pre and post pitstops.

Instead, he tucked in behind his teammate, and when the twist came, right at the end, Perez seized the moment for an important victory celebrated on the podium, watched by his younger teammate clearly relieved the #44 went straight when it did.

The Dutchman still leads the drivers’ standings by four points heading to France in two weeks time. Game still very much on!

Perez said after his first victory in Blue: “Normally Baku is pretty crazy. I have to say sorry to Max, it would have been incredible to get that one-two for the team. But in the end, it was a fantastic day for us. We were close to retiring the car but luckily we managed to finish the race.

“This is definitely a strong boost of confidence for myself,” added Perez who lies third in the championship

Best news on the day was the return of the real Sebastian Vettel, the German delivering the Drive of the Day to claim second and Aston Martin’s first podium in the top flight. A massive boost for the four-time F1 World Champion on a bittersweet day for his team.

As mentioned, Stroll suffered a big impact through no fault of his own when running strongly on a long first stint, before the rear disintegrated. On the other hand, Vettel really needed a big result like this one and this one will do his confidence the world of good.

The German said: “It’s a big deal for the team. We had a good start, made some positions and looked after our tyres. We had really good pace at the (first) restart, which was brilliant for me, giving me another two positions.

“We preserved the tyres well and that was the secret to the pace we had. It was a great day overall. I’m over the moon for myself and for the team, it was great. A podium – we really didn’t expect that,” admitted Vettel.

It was also a huge day for Pierre Gasly who finished third for AlphaTauri on a very good weekend for Honda. The Frenchman’s shares continue to soar with Red Bull’s junior team.

Delighted, Gasly said in the media pen: “Incredible, honestly, I don’t know what to say. It was such an insane race and an intense last two laps every session we were there. Qualifying was mega, I didn’t know we’d be in contention for a podium but in the end, we did. It feels incredible to get that podium.

“We had to get the elbows out, it was a very difficult race from the mid-point as we had an engine issue, Seb managed to pass me but I then had to fight for that podium and I really wanted it. We’ve got some really good points, done a really good race and have done a fantastic job,” added Gasly.

PIERRE: “Super intense last two laps. The car has been incredible all weekend. It feels incredible to get that podium. All in all a fantastic job [by the team]”#AzerbaijanGP 🇦🇿 #F1 pic.twitter.com/vPHnTL8hJF

Leclerc and Ferrari owned Saturday, but it can be said it was a fortuitous pole that the Monaco Kid grasped with both hands with a car that was by n means the best.

And true to form, on Sunday, the SF21 did not have the pace, Leclerc spent most of the day defending as he slid down the order. The restart served him well and fourth was better than he would have attained had all hell not broken loose late in the race. Carlos Sainz was eighth; victim of a mistake that cost him a better result.

Big winner on the restart was Lando Norris who made two positions on the restart to take fifth place and cap a strong weekend for the McLaren driver. Teammate Daniel Ricciardo was ninth, making it a double points haul for the Woking outfit.

Fernando Alonso qualified well over what the Alpine was really worth and in the race he spent the afternoon being overtaken and going backwards in a car that is seriously lacking horsepower.

But the double F1 tapped into his genius at the restart, got his elbows out to muscle his way from tenth to a well deserved sixth place. Esteban Ocon in the sister car was an early retirement with a technical issue on a day their Spanish veteran driver over delivered for Alpine.

Yuki Tsunoda was his feisty self all weekend and may have finished higher up but his inexperience cost him on the restart which cost him but seventh at the venue, he was racing on for the first time, was a much needed good showing by the Japanese youngster.

A massive moment from a mad race 😵

Let down of the day, make that the weekend, was 2019 Azerbaijan Grand Prix winner Valtteri Bottas. The Mercedes driver endured an aimless race, from tenth on the grid, he plodded on to an insignificant 12th place on a day his team really needed him.

It would be fair to say that, Hamilton was the biggest loser today, after Verstappen’s mishap second place would have been perfect for Mercedes and would have ensured he departed Baku top of the standings by 14 points.

But no matter how Mercedes sugarcoat it, the reigning World Champion made an error which in effect means, that in terms of Lewis vs Max, this round does not count and a missed opportunity that has kept the battle wide open after six rounds.

Prior to that Hamilton had a strong race, with a car his Bottas could not tame, but in his teammate’s hands was a very different beast from the one they rolled out of the transporter on Friday. The hard work done by the team to turn it into a potential race winner was impressive, but it all came to nought.

💔on my own race… But happy for the team and a huge congrats to @SChecoPerez on the win 💪 The car, pit stops and strategy were amazing again, thanks to @redbullracing. Not much more to say at this time other than we’ll keep pushing until the end ⚔️ 🇦🇿 #AzerbaijanGP pic.twitter.com/Cwxp76LVZO 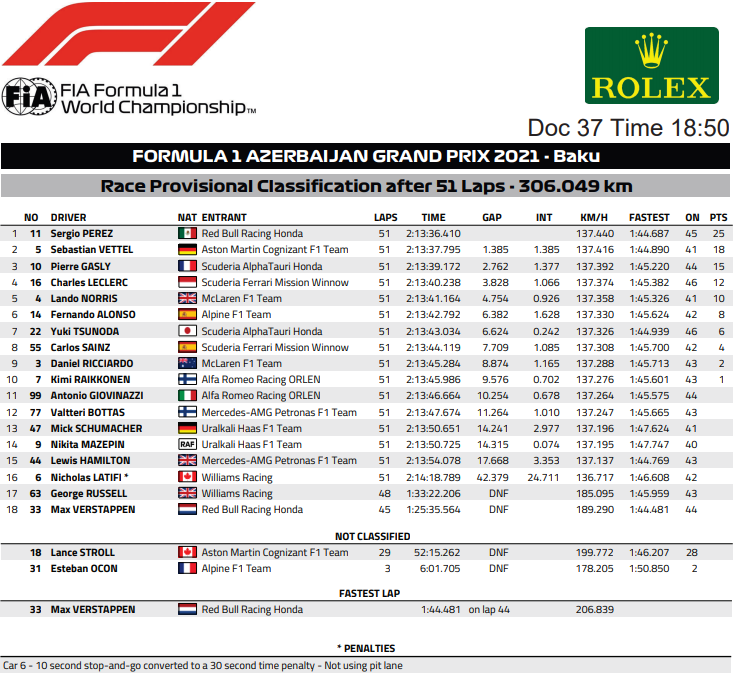 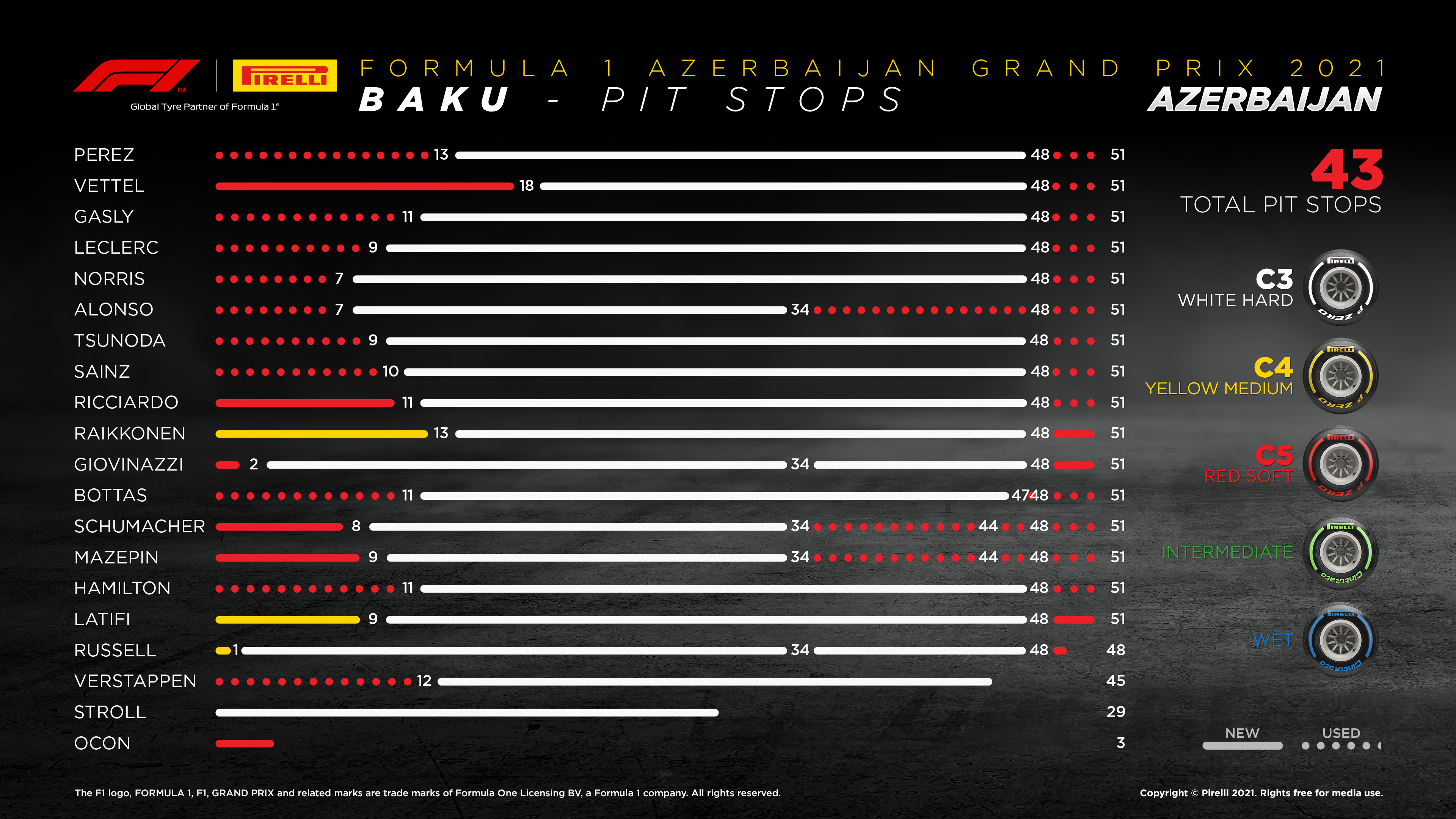