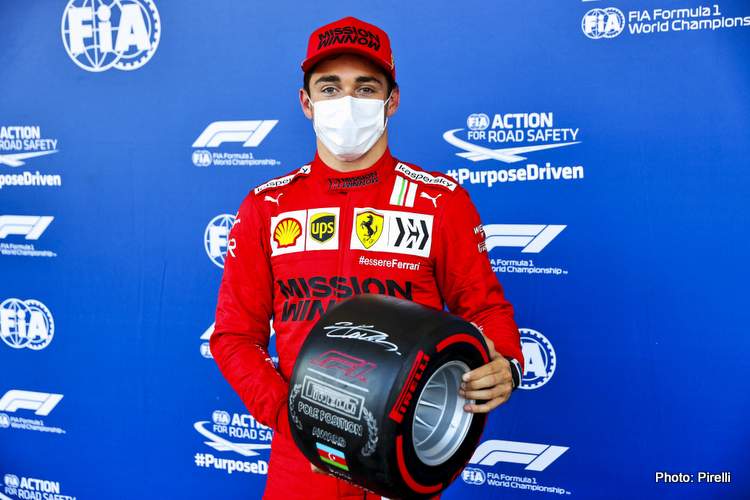 Ferrari have struck a fine vein of form again surprising all, including themselves, with Charles Leclerc claiming pole for the Azerbaijan Grand Prix against the odds in a hectic afternoon qualifying session in Baku.

Granted most of the big guns were denied a final shot at a hot lap in Q3 thanks to a red flag ahead of their final runs, at that point Leclerc had done the business with what he described as a “shit lap” against expectations.

Team boss Mattia Binotto must take credit, despite incessant criticism, for turning things around with a team that appears galvanised by their unexpected burst of form.

Speaking to reporters after qualifying, Binotto said of his team’s feat on Saturday: “We did not come here as favourites for pole that’s for sure. We knew it could have been more difficult for us and we were expecting it to be so.

“But from Friday, we saw that our car was performing well. The medium low downforce package was behaving well, let’s say after yesterday we knew that today we had a slim chance.

“Charles did a fantastic lap, I think a pity as well for Carlos because he was improving before the red flag at the end. But overall certainly happy for today, but now we’re focused on the race.”

And what a race it promises to be with four different teams on the first two rows, Leclerc is sure to be chased by title contenders Lewis Hamilton and Max Verstappen, with Pierre Gasly an outsider with a chance much like Monza last year…

But for now Ferrari can hold their heads high with the progress. As for how the upsurge came about, Binotto explained: “I think that since the very start of the season we were learning about our car, and the way it behaves.

“I think we are exploiting it to the best and that the race team is doing a fantastic job, solid race weekends. I think that the drivers are really learning the car and they are pushing themselves. And overall, we are somehow maximizing or exploiting the maximum of the performance of the car.

“It’s very important for me to see that the team is developing, that people are developing themselves. Again the overall team organization is working well and I think that is again showing.  That’s great for me, that’s great for the team,” explained Bionotto.

Racing director Laurent Mekies added in the team report at the end of the day: “Another pole for Charles, which was even more unexpected than the one/two weeks ago in Monaco.

“We arrived in Baku believing that this would be a much more complicated weekend than the last race, but in fact our performance level was better than expected right from the start of practice, even though theoretically this track should be less suited to our car.

“The team and the drivers did a great job over these past two days, improving the car for every session. Our qualifying performance, the best of any team if you look at the pair of results, is a fitting reward for that.

“Carlos’ crash? He was caught off guard by the smoke from Tsunoda ahead of him. These things happen and anyway, it didn’t affect his result given that, because of the yellow flags, he would have had to slow down at that point on the track.

“We can expect a very tough race tomorrow. Pole is not as important here as in Monaco, given that overtaking is commonplace. Yesterday, we saw that Red Bull and Mercedes were very quick over a long run.

“Tyre degradation will be a key factor, especially in the first stint. We will have to be ready for any eventuality, given that this race usually has all sorts of unexpected twists and turns,” predicted Mekies.

Ferrari are hunting their first win since Sebastian Vettel triumphed at the 2019 Singapore Grand Prix. The German also scored their podium when F1 last visited Baku in 2019.