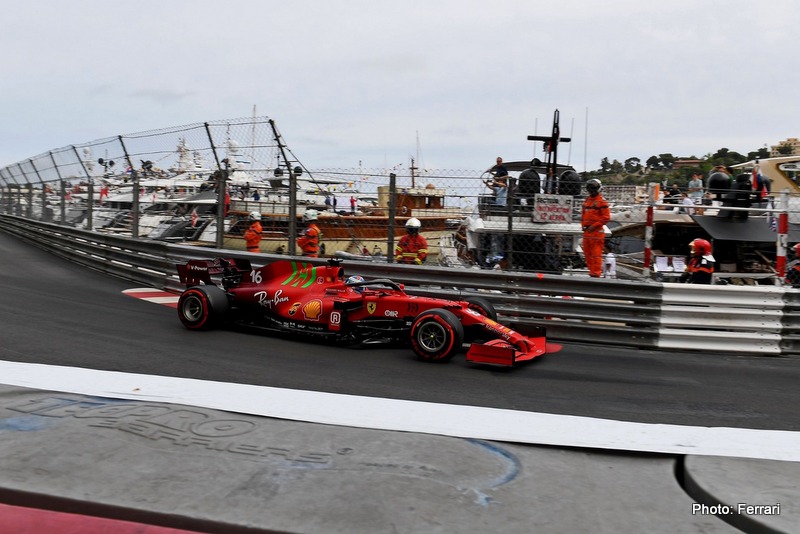 Charles Leclerc took a shock pole position ahead of his home Grand Prix, despite putting his Ferrari in the wall on his final flying lap.

The Monegasque driver beat out Max Verstappen and Valtteri Bottas with a 1.10.346, but has given his team a mighty task to get his SF21 ready for the race after colliding with the wall head on at the exit of the swimming pool section.

Verstappen and Bottas had improved in the first sector of their respective flying laps, but were unable to put in an improved time because of the red flags being called out following Leclerc’s crash.

Carlos Sainz had looked in contention for pole but will have to settle for fourth, with Lando Norris and Pierre Gasly both very impressive in fifth and sixth respectively.

Championship leader Lewis Hamilton will start a surprise P7, giving him a tough ask not to lose ground to Verstappen in their battle at the top of the drivers’ standings.

Speaking to Sky Sports F1 after qualifying, Leclerc said: “It’s a shame to finish in the wall, it’s doesn’t feel the same but I’m incredibly happy about my lap.

“I didn’t do a great first corner but then in the second and third sector I nailed it. Just very, very happy to be on pole as it was very difficult to manage myself mentally after Q2.

“I could feel I was quite emotional in the car – now it’s Q3, now it’s time to put everything together. I managed to do so and I’m incredibly happy.

“It’s tomorrow that we score points but we are incredibly surprised to be on pole and fourth place (Carlos Sainz) for the race tomorrow. I am worried about a penalty [for the gear box]. I’ve always been very unlucky here, so let’s just wait and see.”

Verstappen, who will start second, added: “Unfortunate to have the red flag. I felt really comfortable. No-one was putting in first laps, we planned to do two laps and the third fastest, but the red flag ruined the chance for pole.

“Nevertheless, a good weekend and we recovered well from Thursday so not too bad. Of course, it’s easy to have a red flag, but you don’t expect it and it’s just a shame there was a red flag.”

Bottas did a good job to start third and said afterwards: “It was disappointing not to get my last run in. That’s how it is sometimes.

“I left everything out there for the last one. The first run wasn’t enough for pole but I was feeling good after the second run. I’m gutted.

“I think we have made good progress with the car throughout the weekend, definitely happier with it throughout qualifying. We’ll try everything we can tomorrow. It’s Monaco, anything can happen.”

Sebastian Vettel did a very good job to start in P8, ahead of Red Bull man Sergio Perez in ninth and Antonio Giovinazzi in 10th.

Esteban Ocon narrowly missed out on a spot in Q3, less than a tenth adrift of Giovinazzi, who made it into the top 10 shootout for Alfa Romeo.

Lance Stroll was 13th for Aston Martin, beaten by Vettel in qualifying trim for a second time this season, while Raikkonen is set to start Sunday’s Grand Prix in 14th.

George Russell qualified 15th after another Q2 appearance but did not quite have the pace to put himself any further up the grid.

Fernando Alonso was the shock casualty from Q1, outqualified by teammate Esteban Ocon once again as the Spaniard could only manage to go 17th fastest with a 1.12.205.

Yuki Tsunoda will start just ahead of the two-time world champion from 16th, having missed out on a spot in Q2 by just 0.018 seconds from Vettel.

Nicholas Latifi was able to qualify after his crash in FP3 but could only manage 18th fastest, with Nikita Mazepin slowest of the drivers able to set a time.

Mick Schumacher did not take part due to the damage his Haas sustained in FP3, but will be allowed to start the race. 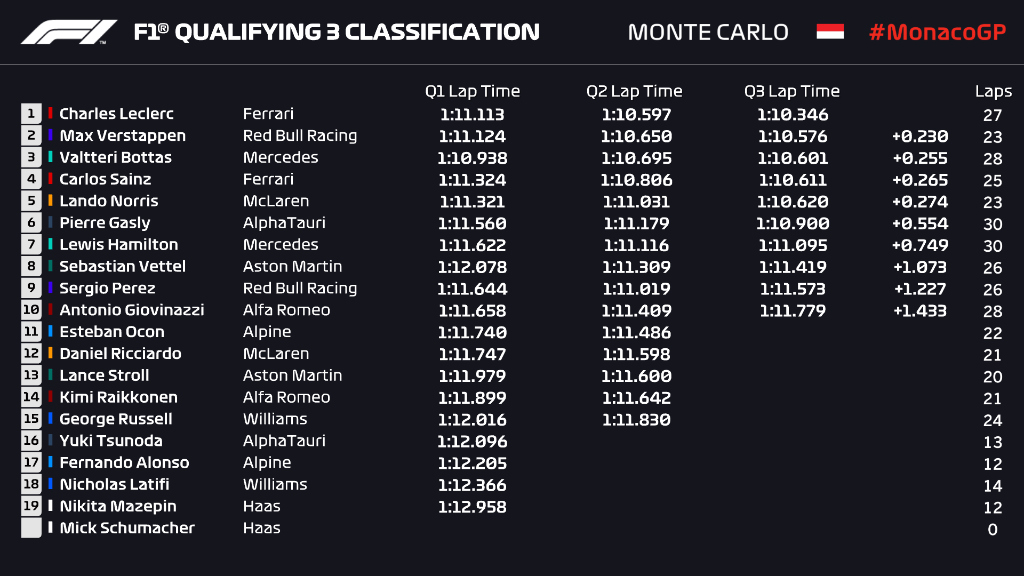 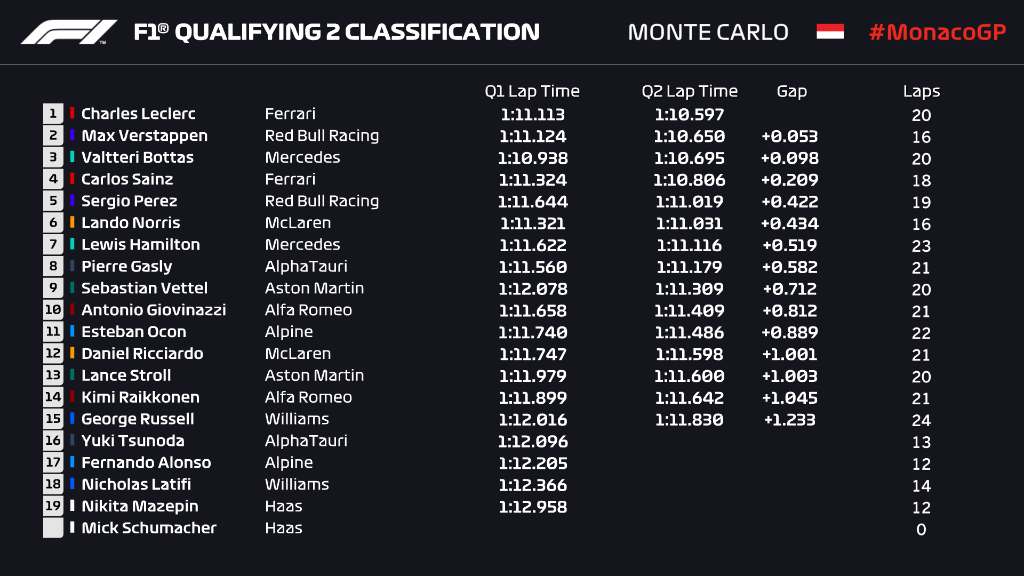 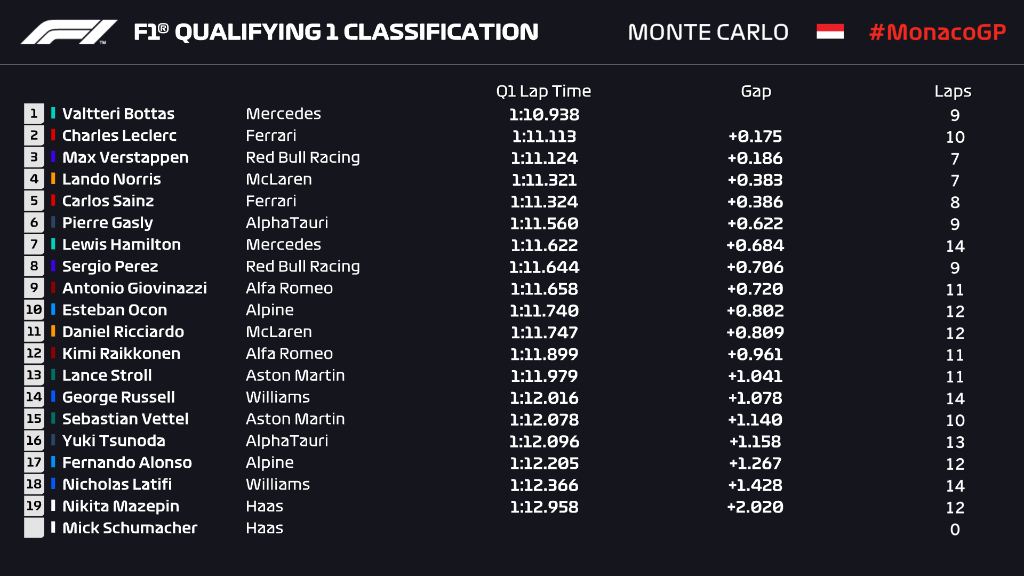 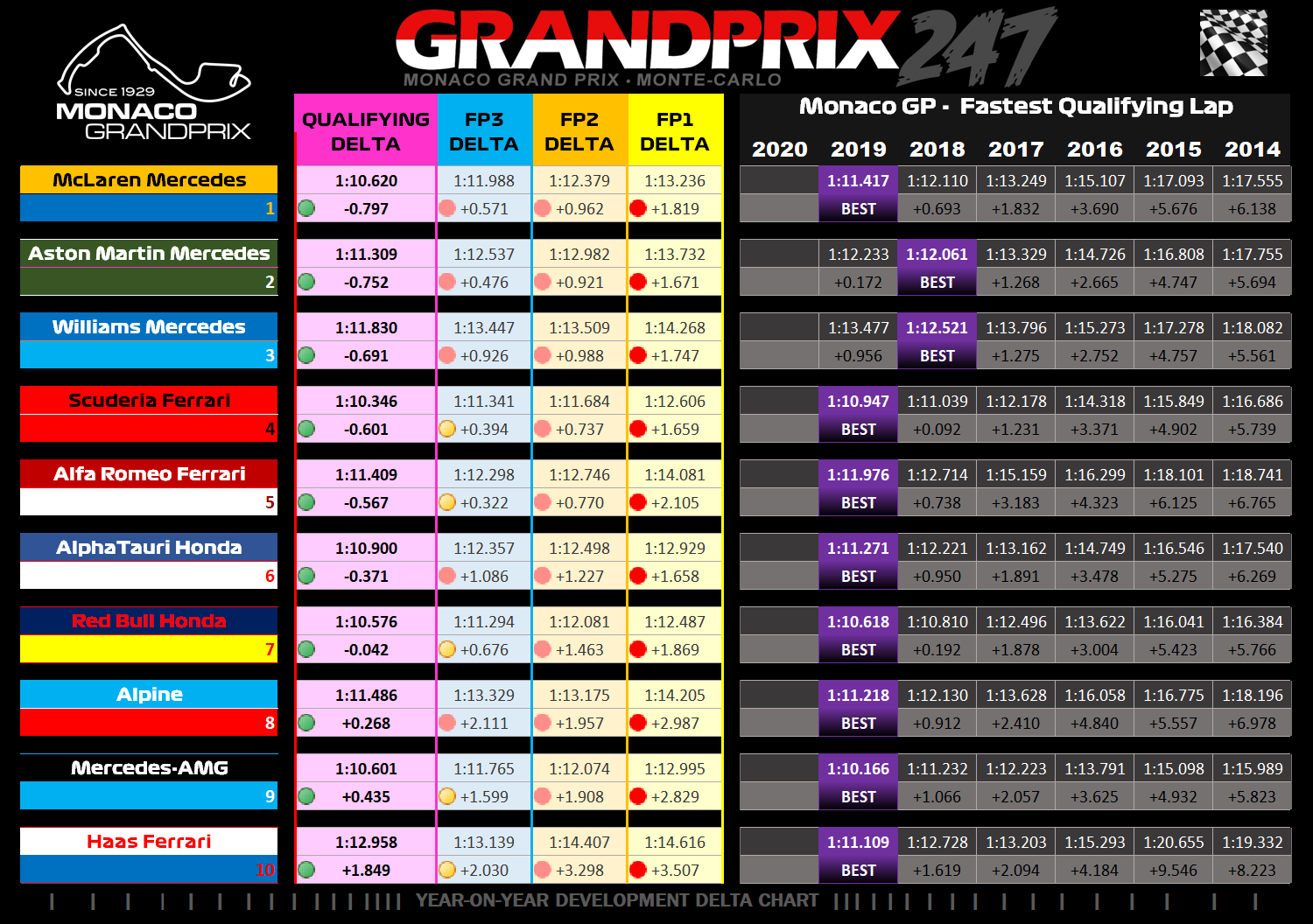