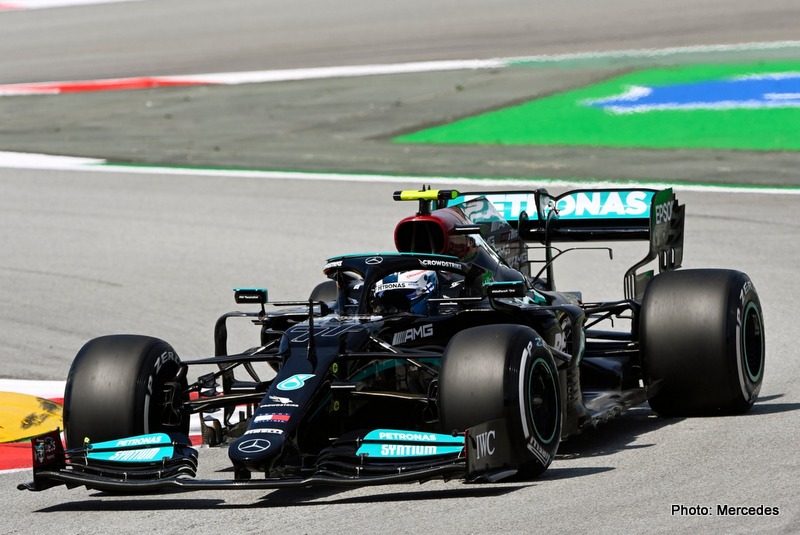 Valtteri Bottas was quickest in the first free practice session ahead of the Spanish Grand Prix, with the Finn less than half a tenth clear of Max Verstappen in second.

Mercedes looked to have the advantage for much of the hour-long session as Bottas and teammate Lewis Hamilton traded times, only for Verstappen to pop up at the end to split the Black Arrows.

Nikita Mazepin brought out yellow flags early on in the session after beaching his car in the gravel at Turn 7, but the Haas driver was able to recover his car back onto the track, limiting the delay.

Robert Kubica, in the Alfa Romeo in place of Kimi Raikkonen, was the other driver to go off track, with his spin at Turn 10 triggering a red flag with 20 minutes still on the clock.

Kubica beaches himself in the gravel at Turn 10 #SpanishGP 🇪🇸 #F1 pic.twitter.com/VVHfd0L1bK

The drivers were able to get back out on track for a final run after the C41 had been cleared, with Verstappen taking advantage to set his best time of the session on the soft tyres.

Bottas, whose spot at Mercedes has been the source of plenty of speculation in the build up to the race, delivered a fastest lap time of 1.18.504, with Hamilton just over a tenth back.

Lando Norris was fourth for McLaren, with Norris trying out the team’s new front wing and floor upgrade, while the Ferraris of Charles Leclerc and Carlos Sainz were fifth and sixth respectively.

Pierre Gasly looked strong in the AlphaTauri and went seventh, while Sebastian Vettel and Lance Stroll were eighth and 10th in a more positive showing for Aston Martin, with Sergio Perez ninth.

Both boys finish #FP1 in the top 10. 💪 pic.twitter.com/FPtBL3hvzt

Yuki Tsunoda was 11th, ahead of the Alpine of Esteban Ocon and the Alfa Romeo of Antonio Giovinazzi.

Daniel Ricciardo, still seemingly trying to get on top of his McLaren, was 14th, with Alonso 15th ahead of his home Grand Prix.

Nicholas Latifi was quicker than Williams reserve driver Roy Nissany, who is driving in the place of George Russell, as the Grove team sealed 16th and 17th, while Mick Schumacher was 18th.

Kubica was good enough for 19th prior to his incident, with Mazepin 20th more than a second back from Schumacher. 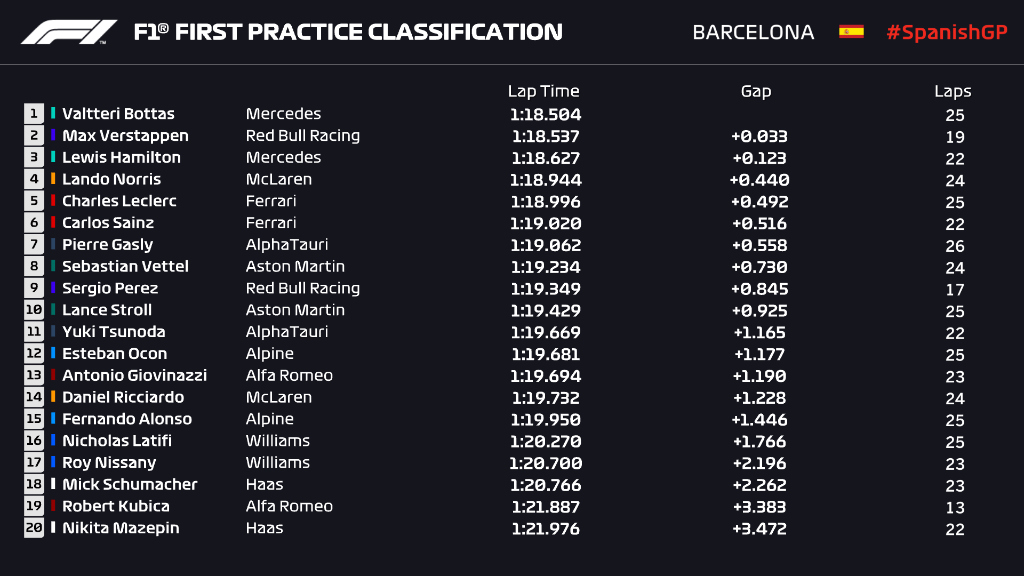