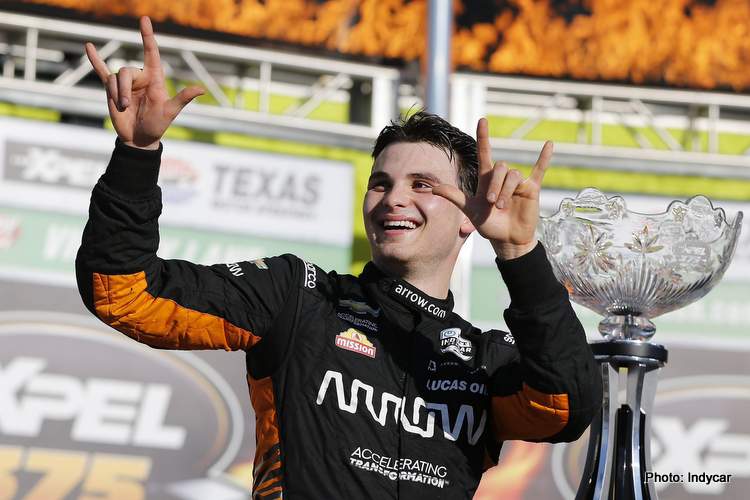 Pato O’Ward felt calm while he enjoyed the ride in the closing laps in Texas, getting his first IndyCar Series victory at the track closest to the Mexican-born driver’s hometown Sunday.

O’Ward passed Josef Newgarden with 23 laps to go Sunday and stayed in front the rest of the way in the No. 5 for Arrow McLaren SP. The organization will now follow through with a promise to let O’Ward test a Formula One car at the end of this year.

The race was the second in as many days at Texas, and was marred by the IndyCar’s second first-lap crash of the season.

Six cars were done before they reached the green flag, when Pietro Fittipaldi hit Sebastien Bourdais from behind, knocking the four-time open-wheel champion into Alexander Rossi.

The cars of Ed Jones, Dalton Kellett and Conor Daly also were destroyed in the crash that happened as they approached the start-finish line for first time.

Daly, who was starting at the back of the 24-car field, got knocked upside down after he got caught between two other cars. He skidded along the front stretch before the car planted into the rain-saturated infield grass and flipped back onto its wheels.

The aeroscreen on Daly’s car protected him while the car was upside down. The aeroscreen likely saved Ryan Hunter-Reay’s life in the season opener at Barber when it deflected a tire away from his helmet in another first-lap crash.

Newgarden, who started sixth, said he noticed a “a small checkup” somewhere in front of him.

“The smallest checkup can turn into a really big effect down the line. And I think that’s what happened today,” Newgarden said. “I was able to kind of adjust, but I think they probably overreacted in the back. It’s unfortunate. … It can get really tricky at the back.” 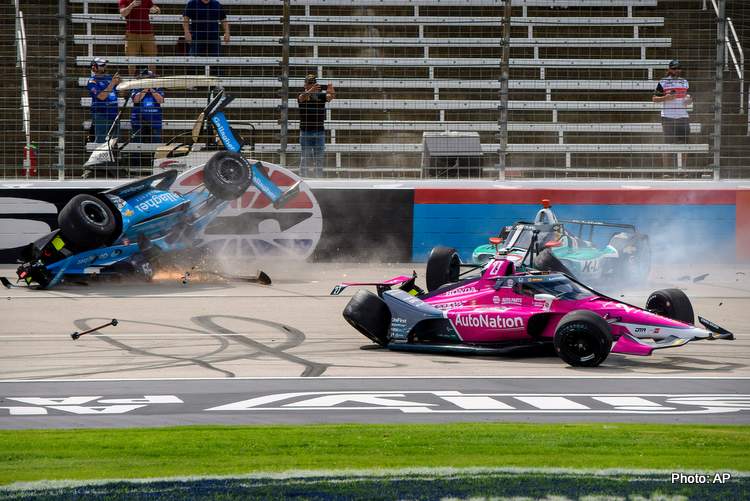 The two-day show in Texas concluded an exhausting stretch of four races over three weekends to open the season before going to Indianapolis for the rest of May. The road course race there is May 15, with the Indianapolis 500 on May 30.

Newgarden finished 1.2443 seconds behind O’Ward, giving Chevrolet a 1-2 finish and its first victory this season. It was the first IndyCar win for Chevy by a non-Team Penske driver since 2016.

Graham Rahal was third, in front of Scott Dixon and Colton Herta.

Dixon led 163 of 248 laps Sunday at the 1 1/2-mile oval, after being in front for 206 of 212 laps Saturday night, in a 1-2 finish of New Zealanders, with rookie Scott McLaughlin second. Dixon’s fifth win at Texas was No. 51 for his career overall, moving within one of Mario Andretti for the second-most behind A.J. Foyt’s 67.

O’Ward, who grew up at times in San Antonio, Texas, won in his 26th IndyCar start and second full season.

McLaren told him, at the start of the season, that he could test the F1 car this year if he won in IndyCar. Moments after the win, Zak Brown, head of McLaren’s F1 team, tweeted “A deal’s a deal @PatricioOWard – what a win! See you in Abu Dhabi later this year!”

O’Ward made a strong push on the final restart with 30 laps to go, trailing Newgarden for several laps before going around him in Turn 3.

“I feel like we truly earned our win today. I knew we had a very, very, very quick car. It’s just very, very tough to pass. And then everybody kind of got boxed into the same strategy,” said O’Ward, adding that he never felt in a defensive mode.

Daly said he wasn’t really sure what happened at the start of the race, and that everyone had started to accelerate before the accordion effect created chaos.

“It just takes one person when everybody is nose to tail,” he said.

Fittipaldi, who at Texas ran his first IndyCar races since 2018, said the field suddenly showed down ahead of him and, “I had nowhere to go.”

“Watching that, I’m glad Conor is OK, glad everybody is OK,” Rossi said when viewing a replay.

Rossi was critical of IndyCar setting the start by points rather than qualifying on speed, particularly with the early Sunday evening start and teams sitting idle most of the day. It put cars of varying speeds throughout the field, a factor in the crash as the cars tried to get up to speed heading to the green flag.

Tony Kanaan was able to keep racing despite some hard contact. James Hinchcliffe had issues after driving through the fray, and completed only 30 laps between several extended stops before parking the car for good.

Foyt’s team had worked late into the night to rebuild the No. 14 Chevrolet for Bourdais after he was hit from behind by Newgarden only 56 laps into Saturday’s race. Bourdais was running sixth then when he spun and the car backed hard into the outside wall. Both Foyt cars (the other being Kellett) were in the opening crash Sunday.

“It’s a real shame that two days in a row we get drilled and taken out of the race,” Bourdais said. “A very expensive couple of days for A.J. Foyt Racing. … The guys worked until midnight to fix the car, and can’t even take the green flag.” 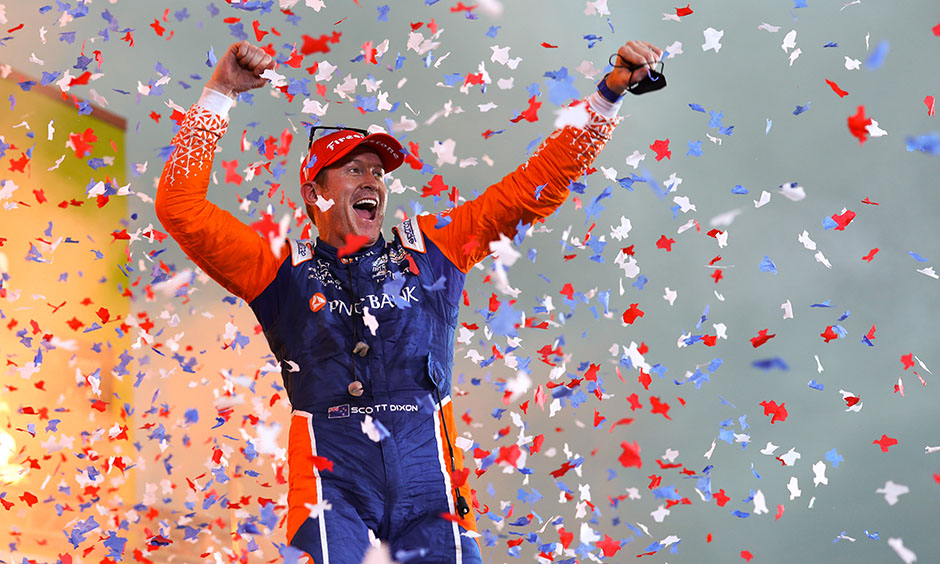 There was a time Scott Dixon wasn’t a big fan of racing at Texas Motor Speedway but you would never know it now as the six-time and reigning Indycar champion earned his second consecutive and fifth overall victory at No Limits, Texas by taking the checkered flag in the Genesys 300 on Saturday.

“It was a bit of a crazy night for us,” Dixon said. “Definitely very tense there at the end. It was kind of cool to be racing a countryman for the last few laps. Fifth win at Texas, baby! That was awesome.

“It feels amazing to be in this position. You just never want it to end. We want to go back-to-back and try to tie Mario tomorrow. I’m sure that’s not exactly what he wants to see. We’ll keep our heads down. It’s extremely tough. This season has been one of the toughest starts, I think, for a lot of us just with how tight the competition is.”

The victory is Dixon’s 51st, putting him just behind Mario Andretti (52) and A.J. Foyt (67) all-time in the series. His fifth Texas Motor Speedway victory breaks a tie with Helio Castroneves for most wins as well as being the first repeat winner in the series’ 33-race history at The Great American Speedway.

Dixon’s other three wins came in 2018, 2015 and 2008. The Genesys 300 victory also made it 19 seasons Dixon has earned at least one NTT Indycar Series victory, breaking a tie with Foyt.

Damp conditions throughout the morning and early afternoon cancelled qualifying, setting the starting grid based on the entrant point standings. That put Palou on the point, the No. 12 Team Penske Chevrolet of Will Power to his right and Ganassi teammate Dixon directly behind, with the No. 26 Andretti Autosport Honda of Colton Herta on the outside of Row 2.

Palou, who came to Texas with the point lead after two races, led the first two laps before Dixon grabbed the top spot. Dixon maintained a 0.4-of-a-second lead over his teammate after 15 laps and slightly less than that by the time green-flag pit stops began on Lap 53. 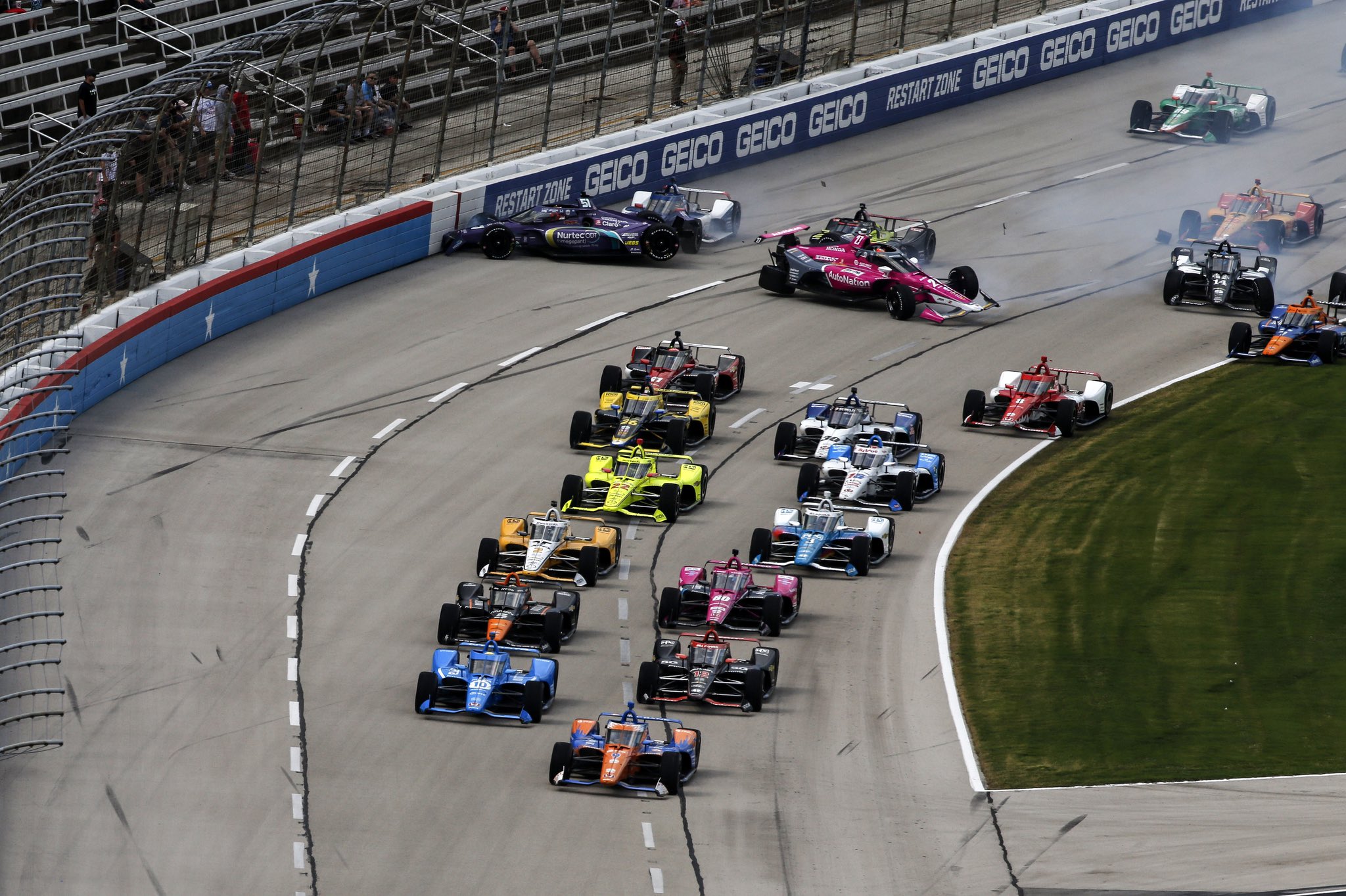 The day’s first caution waved just four laps later when Sebastien Bourdais made hard contact with the outside retaining wall after a tap from behind by Newgarden. Newgarden was able to continue but Indycar officials deemed the incident to be avoidable and penalized him with a restart at the back of the field.

Dixon continued his run out front before relinquishing the lead back to Palou on Lap 125 during another round of green-flag pit stops. But the No. 9 Honda returned to where it was most comfortable just four laps later.

The evening’s second and final caution slowed the field on Lap 160 when the No. 7 Arrow McLaren SP Chevrolet of Felix Rosenqvist and the No. 29 Andretti Steinbrenner Autosport Honda of James Hinchcliffe made contact in Turn 2, forcing Hinchcliffe hard into the outside wall. It was nearly a mirror image from last year when the two tangled, sending Rosenqvist into the wall and out of the race.

The field returned to green on Lap 175 of 212. McLaughlin lined up directly behind Dixon, with O’Ward and Palou in tow. As the laps counted down, McLaughlin hung tight to the leader but was not able to make a final charge before the checkered flag wave.

There were three lead changes among two drivers and two cautions for 29 laps.