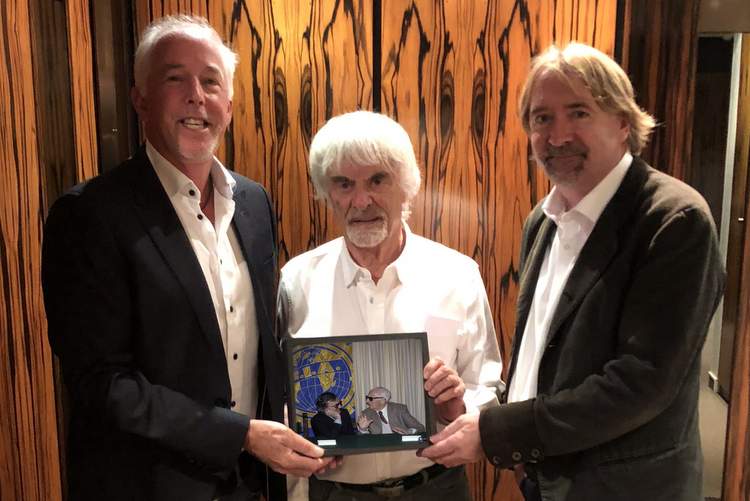 Legendary Formula 1 photographer Keith Sutton and artist partner Mark Dickens have wowed Bernie Ecclestone with their art, so much so that the former Formula 1 supremo bought the entire collection.

Ferrari in Art – The Sporting Legacy, a collection of 25 unique original artworks celebrating everything Ferrari, has been purchased by former Formula One Chief Executive Bernie Ecclestone.

The series of works by international artist Mark Dickens, in collaboration with renowned F1 photographer Keith Sutton, encompasses all the features that make Ferrari so special.

“There has never been a collaboration like this before and I could not resist the opportunity to acquire it for my private collection. I know both Mark and Keith well and have always been impressed by their professionalism,” said Ecclestone.

“I first became aware of Mark back in 2009 and in 2011 I commissioned him to create 19 paintings, showcasing each of that year’s races. The following year we presented each painting to the respective promoter.

“I have known Keith even longer, as I first met him when he started his motorsport photography career 40 years ago, and I am well aware of his enduring passion for Ferrari.”

Ecclestone is not the only notable person from the sport to have bought one of the Dickens/Sutton collaborations. In 2016 four-time world champion Sebastian Vettel acquired their first collaboration ‘World Champions in Art’.

For the Ferrari artwork, Sutton tracked down all the influential figures associated with the Italian brand. For each painting, drivers, owners, fans and motorsport personalities were asked to express in their own words what ‘Ferrari’ means to them.

More than 129 handwritten quotes were obtained from the individuals and transferred onto the 25 pieces of artwork. The outcome was a unique, contemporary and historical collection of Ferrari art.

“It has been a pleasure to collaborate with Keith on this unique project,” said Dickens. “I first approached him about my idea to realise this project some three years ago, knowing his passion for Ferrari. He was delighted to be part of this historic series of artworks and quotes. It’s a proud day for me to know that 25 paintings now belong to such an iconic person in the world of Formula One.”

“It was special to be involved in a project that I am so passionate about, and then when Bernie Ecclestone acquired it that was the vindication for what we have produced, as I am sure he has some amazing artworks in his personal collection.

“It is a one off project and one I will never forget. However, such a project is a mammoth undertaking and one that could not have been completed without some amazing help. I would like to say a heartfelt thank you to all the 119 motorsport personalities from drivers, team principals, to current and past F1 drivers, owners, fans and Ferrari collectors who gave hand written quotes and, of course, the artist Mark Dickens whose unique style complimented the wonderful Ferrari images.”

Included in the artworks are personal comments from past and present Ferrari executives, engineers, team managers and drivers, as well as passionate Ferrari collectors from the world of fashion, music, cooking and F1.

The comment by Toto Wolff, CEO and Team Principal of the Mercedes-AMG Petronas Formula One Team, ‘At the end we are all Ferrari Fans’, perhaps best sums up what all these people feel.

Piero Ferrari, Son of Enzo Ferrari: “My father would have liked Ferrari of today? Tough and demanding, as a father and as a boss, capable of gestures of great and unexpected generosity.

“Courageous and innovative, always looking to the future decided to set up the “Scuderia” in 1929 the year of the great crisis and the project of creating a car factory in Italy still living in the ruins of the Second World War.

“My father was interested to the future, not to the past. Not just interested in the cars of the future but on all new technologies from which top take imagination for future projects. For sure he would have been enthusiastic about the “internet era”, but unfortunately died before.

“It’s precisely because of the father total determination to look ahead and his saying that the best Ferrari was yet to come, that my father have liked what the company has become today.”

Bernie Ecclestone, Former Chief Executive of the Formula One Group: “My first meeting with Mr Ferrari was strange; because of his lack of English and my lack of Italian. But, with the help of Mr Gozzi, we managed very well and became close, probably because he trusted me, and I trusted him.

“Even when we had the FOCA/FIA war, behind the wall, he supported me. Although he always referred to the English teams as garage people, he had big respect for Colin Chapman of Lotus.

“He liked people to think that he supported the FIA as that was the legal establishment but was always happy with the deal that we closed together. I really miss this real gentleman, Mr Ferrari. He could be relied on to do what he promised.”

Mario Andretti, Ferrari F1 Driver 1971, 1972 and 1982: “My admiration (no, it’s more like pure love) of Ferrari began when I was a child growing up in Italy. I was a true fan. The most influential person to me at the time was Alberto Ascari, World Champion for Ferrari.

“Later, when I had the chance to drive and win for the Ferrari factory – as well as have a personal relationship with Enzo Ferrari – it was incredible. Today Ferrari is at the top of the list of unforgettable experiences in my life.

“I don’t think there is anything more prestigious for a professional racing driver than to say you drove and won for Ferrari. It has extreme special meaning all across the globe. You can talk about Ferrari anywhere in the world and everyone knows the esteem.”

Gordon Ramsay, 3 Star Michelin Chef and Ferrari Owner: “Why Ferrari? If you saw one on the motorway when you were five or six you never forgot it. My dream was to win three Michelin Stars and own a Ferrari. I can see the synergy between what I do and what happens at Ferrari.”

Nigel Mansell, Ferrari F1 Racing Driver 1989 – 1990: “Driving for Ferrari was a honour and a privilege, with so many cherished memories. Also to be nicknamed ‘Il Leone’ by the Italian fans was very special. Ferrari is a family second to none.”

***
Charles Leclerc, Formula One Ferrari Racing Driver: “Ferrari has always been a dream since child. This team has so much history in F1 and to be no part of it in only my second Formula 1 season is beyond everything I had dream of.”

***
His Serene Highness Prince Albert II of Monaco: “Ferrari stands for excellence, expertise, competition, elegance and tradition. All drivers dream at some point in their career, of racing for Ferrari, as it embodies the very essence of high performance in sport. I dare draw a parallel between Ferrari and the Monaco Grand Prix, both emblematic entities associated with the history of Formula One racing. Ferrari is more than a recognised brand across the globe. It is a generator of dreams for most of us. It’s an aura that is not about to wane in any way with future generations. Since the women and men who contribute to it are inbred with its history and the will to perpetuate Enzo Ferrari’s legacy”