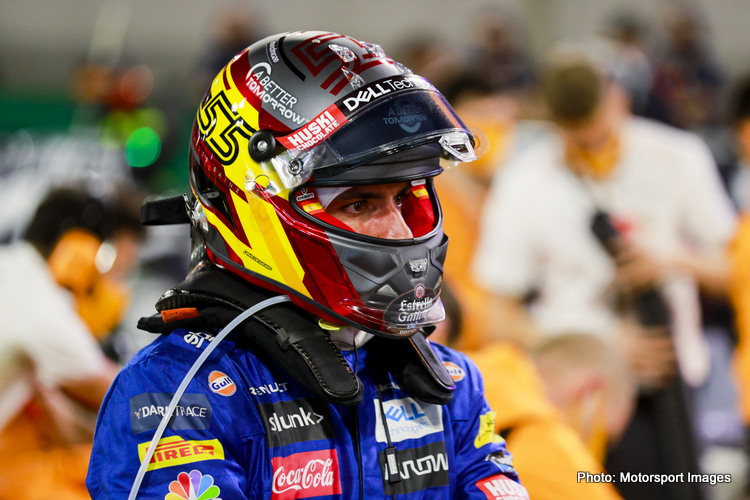 McLaren’s Carlos Sainz has rued his fourth-placed finish in Sunday’s Sakhir Grand Prix, but admits he would have been hard-pressed to do any better.

Missing out on what would have been his second podium of the 2020 Formula 1 season and third of his career, Sainz ultimately finished 0.711 seconds behind a top three that with two Racing Points and a Renault, was entirely made up of midfield rivals.

Speaking after the race, Sainz did not try to hide his frustration.

“Argh! This is a very bitter fourth place,” he admitted. “The podium was very very close the whole way but unfortunately, we couldn’t make it happen.

“The start was obviously eventful, and I managed to squeeze into P3. That first stint on the Soft was super strong. It was a close call between strategies, and we went for the two stops. After the last Safety Car, the Mercedes stuck behind Stroll was not very helpful and I think I lost one lap too many. I managed to get past him and hunt down Stroll to the end, missing the podium by a small margin.

“I drove my heart out there today and did everything I could to get it. It’s frustrating, but at the same time we’ve been beaten by cars that were a bit luckier today and also a bit faster the whole weekend.”

Nevertheless, Sainz said he could take satisfaction in how far he had managed to push his rivals all weekend, even going so far as to brand it one of his “best races”.

“Especially because the Renaults have been quicker all weekend and Racing Points too, so already the job we did yesterday in qualifying and today to jump at the start and got ourselves a bit ahead – even on pace, sometimes by better tyre management – we were managing to open some gaps and together with that I think we kept ourselves really, really in the fight the whole way through,” he said.

“Honestly, we got beaten as I said by a Racing Point that came from last to first with an incredible pace with a one-stop [strategy] which we thought it was not possible, at least for us.

“So yeah, we were beaten by quicker cars today. We did everything we could. I did probably one of my best races, I cannot really complain too much.

“I don’t think we left anything on the table out there.”