Green: Stroll needs a bit of a hug 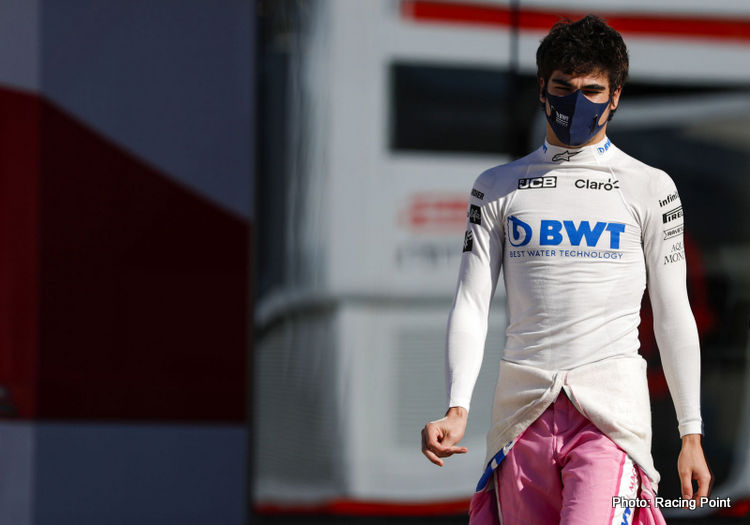 Lance Stroll needs “a bit of a hug” to recover lost form and confidence after recent crashes and contracting COVID-19, according to his Racing Point team’s technical director Andrew Green.

The 22-year-old Canadian Formula 1 driver, son of team owner Lawrence, has not scored in five races since he finished third in the Sept. 6 Italian Grand Prix at Monza.

He missed the Oct. 11 Eifel Grand Prix at the Nuerburgring due to sickness and then tested positive for the new coronavirus on returning home.

Monza was his seventh successive scoring finish and lifted him to fourth. He is now 11th.

“From where he was at Monza to where he is now, he’s definitely (had) a lack of confidence.” Green told reporters after Stroll finished 13th at Imola in Sunday’s Emilia Romagna Grand Prix.

“I think the illness did knock it out of him. That’s something that we hadn’t really foreseen.

“We’d heard about the length of time it can take to recover from the illness and I think it is taking some time, he just needs to get his confidence back again, believe in himself again.”

Stroll retired on lap one of the Russian Grand Prix in Sochi and then fell sick.

He had crashed out of the Tuscan Grand Prix at Mugello, on the weekend after Monza, and tangled with McLaren’s Lando Norris in Portugal, the race before Imola. On Sunday, the youngster also knocked over a mechanic at a pitstop.

He also had a practice collision with Red Bull’s Max Verstappen in Portugal.

“He’s obviously taken quite a battering physically and mentally,” said Green. “It was quite a big accident in Mugello, so I think that probably dented his confidence, and then not to be fit for a couple of races.

“It’s really fine margins… half of it he probably just needs a bit of an arm around him, and a bit of a hug, and say ‘come on let’s pull yourself together now and let’s get on with this over the last few races’”

Stroll’s team mate next season will be four-times world champion Sebastian Vettel, whose move from Ferrari was announced after Monza.